Being on vacation the past few days and, therefore, limited in terms of my ability to stay intimate with the pulse of world goings on, I had to choose carefully what I took in, when I had the opportunity to take something in.

So I decided I’d here and there skim through the latest work of other macro actors whom I respect.

In this week’s main message I’ll reflect on the very odd circumstances, and the overall investment setup, we’re having to traverse.

Bottom line, I’m fascinated by the latest narratives coming even from market analysts whom I respect, and whose work I consistently follow.

Without naming names, two who, like us, have their own unique process for assessing macro conditions are essentially all in on the signals that their respective indicators are sounding.

I.e., we’re in the early stages of a new expansion, which has the usual suspects (like small cap U.S. equities) leading the way, and that investors should be positioning their portfolios accordingly.

While, as I’ve been reporting, our macro assessment reflects notably improving conditions as well, we nevertheless find ourselves reluctant to take our latest findings and run with them like it’s early 2009… Nearly the whole time from that point through November 2019 we managed the non-fixed income portion of our portfolio almost entirely with equities (we mixed in a small commodities position over brief intervals a time or two). Although we did begin hedging with options in August 2019.

I mean, sure, last year’s recession was severe, and the 35% decline in stocks was painful (for unhedged portfolios), but the utter brevity of both, the swiftness of the recovery in stocks, the virtually zero purging of the excesses (read debt) — adding to them, actually — of the previous expansion, and the previously inconceivable amount of government “stimulus” haphazardly thrown into the economy, makes for a most distorted general setup.

Therefore, frankly, I struggle with how any credible analyst can proffer a bullish narrative without including bolded, large cap caveats pointing to what I just pointed to strewn throughout.

But, then again, if you’re data-driven, and disciplined, you do what the data suggest, which is essentially the mantra of many who do the work, crunch the data and rely on it when assessing probabilities.

Well, good or bad, we can’t help ourselves but to add an extra layer. Call it what you will; second guessing, second-(or third)-level thinking, critical thinking, yada yada.

Gaze at the following graphs; the shaded areas denote recessions. Note how each respective data point has trended during every past recession, save for last year’s.

Growth in the value of real estate held by households: 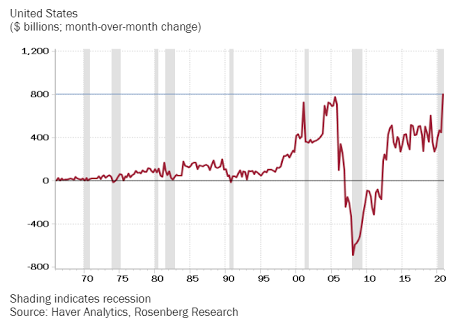 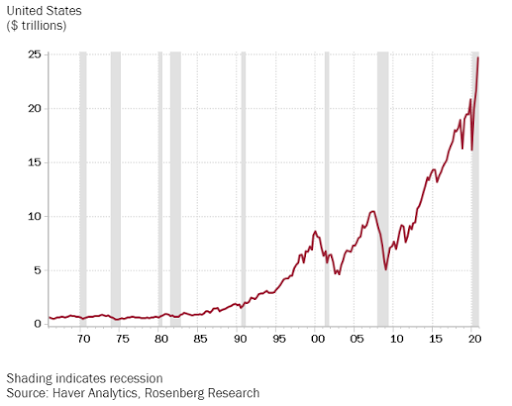 Household Net Worth as a Share of Disposable Income: 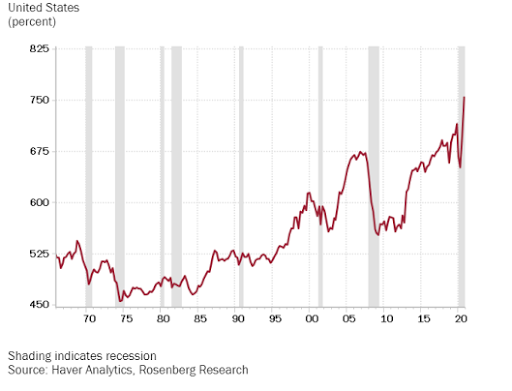 Let’s zero in on that last one:

Note the huge spike in personal income March to April, when stimulus checks and extra unemployment benefits first hit. Then the dramatic trailing off. Then the huge spike when the December stimulus checks showed up. When this graph updates no doubt we’ll see a similar decline, then a big boost on the recent $1,400 per person round.
Should we suppose that the anomalies illustrated in these charts have virtually everything to do with the unprecedented largesse hurled into the spending — and the speculating — side of the economic ledger?
Then of course there’s the question you just asked yourself: What happens on the news that this form of stimulus simply can’t last forever?
Well, I suspect that it will correspond with the passing of a $3 trillion dollar infrastructure plan — which may indeed delay the inevitable demise of the most bubbly areas of the equity market. Operative word being “inevitable.”
So what’s the thoughtful investor to do?
First, recognize where we are based on history’s lessons.
Dave Rosenberg is one of a number of elite macro thinkers who (save for the two I referenced above) agree that — despite what you’re hearing from Wall Street, and perhaps reading from the data — we are skating on very thin ice right here:

“…make no mistake — when you look at the CAPE multiple, the frenzy in futures day in and day out, the extreme leverage, record-low PM cash ratios, the surge in retail trading volumes, excessive market optimism and mass speculation, the answer is yes… this is a bubble… debating when or what the catalyst may be is a waste of time, focus on what we know, which is that bubbles do not correct by going sideways… they burse in spectacular fashion.”

Second, use diversification as a form of hedging. I.e., rather than simply dividing your portfolio among a basket of different U.S. stocks, spread your allocation globally and among asset classes that don’t correlate perfectly with the stock market.

And, therefore, divorce your attachment to the day to day gyrations in stocks. Proper asset allocation, under present circumstances, virtually assures that you’ll experience stretches where your results deviate markedly from U.S. stocks, in both directions.

Third, hedge with options… Think of them as insurance, hopefully you’ll never need the protection, but it’s a true blessing when the bottom falls out — we’ve learned that from experience…

Of course, you subscribers who happen to be clients, we do the above on your behalf…

It’s been just over 20 years since the last true stock market bubble burst (note; the more recent 2008 experience resulted from a real estate, consumer debt and mortgage backed securities bubble [not a classic stock market bubble]; the hit to the economy brought the stock market down with it).
The following from Galbraith’s 1994 volume, A Short History of Financial Euphoria, speaks to our concerns.
Read carefully, this should strike a chord (with what we’re witnessing today):

“Let it be emphasized once more, and especially to anyone inclined to a personally rewarding skepticism in these matters: for practical purposes, the financial memory should be assumed to last, at a maximum, no more than 20 years. This is normally the time it takes for the recollection of one disaster to be erased and for some variant on previous dementia to come forward to capture the financial mind.

It is also the time generally required for a new generation to enter the scene, impressed, as had been its predecessors, with its own innovative genius. Thus impressed, it becomes bemused by the two further influences operating in this world that are greatly seductive of error. The first, as sufficiently noted, is the ease with which any individual, on becoming affluent, attributes his good fortune to his own superior acumen.
And there is the companion tendency of the many who live in more modest circumstances to presume an exceptional mental aptitude in those who, however evanescently, are identified with wealth. Only in the financial world is there such an efficient design for concealing what, with the passage of time, will be revealed as self- and general delusion.”