Quote of These Times 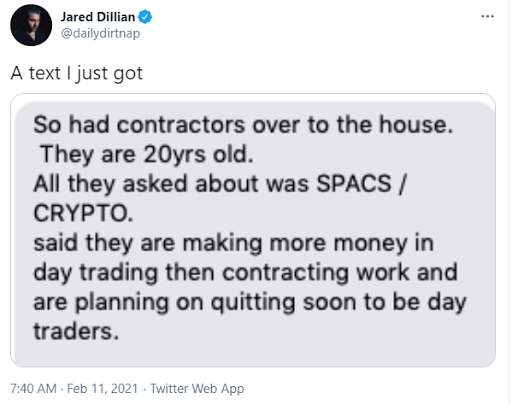 “Honestly folks, it’s been just over 20 years since I’ve seen this much fervor over stocks. And we’ll lump certain cryptocurrencies (same fervor, new target) in there as well…

Like back then, I’m fielding questions from folks on stuff they’d never dream of considering under normal market conditions; it’s just that they know somebody, or know somebody who knows somebody, who’s making a killing! Just like 1999!

Of course there’s Reddit, but I know of small custom chatrooms where friends share stock tips; then abuse one another when somebody’s tip hasn’t moved within a day or two after delivering it… Just like 1999!

I know of situations where folks quit well-paying jobs to trade full time. Just like 1999!

Employers have told me of employees coming to work and bragging about the thousands they’re making in their early morning trading sessions… Just like 1999!

And there’s much more…. Valuations, call volumes, euphoric sentiment readings, volatility, margin debt, on and on… Just like (in many cases more so than) 1999!”