Macro Update: Back to Flat

Well, back to zero this week for our macro index: 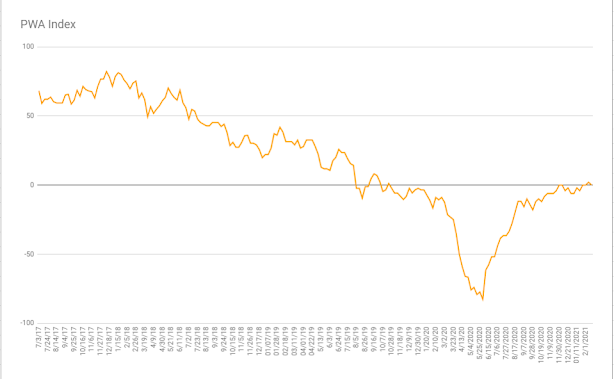 With (among the growthy/cyclical sectors) only the tech sector outperforming the S&P 500 Index over the past month, our sector/spx ratio indicator took our index down a notch as well:

On the plus side, a pickup in heavy truck sales added a point:

Other inputs (not experiencing score changes) worth charting for you are:
Retail sales; definitely not screaming “confident consumer”:

Nor was this morning’s release of the widely followed University of Michigan Consumer Sentiment Survey:

Small business owners (the employers of 2/3rds of us) are not remotely feeling the euphoria today’s stock trader is…
NFIB Small Business Optimism Index:

Citi’s U.S. economic surprise index (actual data compared to economists’ expectations) has been falling back to Earth of late:

As have all things commodities…
Bloomberg Commodity Index:

“Now we have the esteemed Bill Dudley; a most accommodating and line-toeing Fed board member during his tenure as NY Fed president from 2009 to 2018. This morning, however, he’s writing on the huge risk of some serious, potentially policy-impacting, inflation to come. (h/t Peter Boockvar)

Here’s the close to his Bloomberg piece this morning:

“All this suggests that the Fed, despite its desire to be
accommodative and boost employment, might have to pull back on
stimulus sooner and with greater force than anticipated to keep
inflation in check.

Such a move would be a significant surprise,
given that in the Fed’s most recent Summary of Economic
Projections, the median projection foresees no rate hikes
through 2023.

This, in turn, would further increase the chances
of a volatile market reaction, along the lines of the taper
tantrum that the U.S. experienced in 2013.””

“Here’s what Alan Greenspan had to say in his post-fed-life best seller The Age of Turbulence:

“Big deficits have an insidious effect. When the government overspends, it must borrow to balance its books. It borrows by selling treasury securities, which siphons away capital that could otherwise be invested in the private economy.””

“Make no mistake, and keep this forever in mind, the powers-that-be (the Federal Reserve in particular) in their minds exist to make linear that which, by its nature, is cyclical. Their past efforts to circumvent the economic cycle have resulted in a debt-ridden setup that has them resorting to… well…. there’s I suspect virtually nothing that they can conjure up at this point that will be deemed off limits…

Ah, but can they circumvent the cycles of human nature?

“…bubbles and crises seem to be deep-rooted in human nature and inherent to the capitalist system. By one count there have been sixty different crises since the early seventeenth century—the first documented bank panic can, however, be dated to A.D. 33 when the Emperor Tiberius had to inject one million gold pieces of public money into the Roman financial system to keep it from collapsing.

Each of these episodes differed in detail. Some originated in the stock market, some in the credit market, some in the foreign exchange market, occasionally even in the world of commodities. Sometimes they affected a single country, sometimes a group of countries, very occasionally the whole world. All, however, shared a common pattern: an eerily similar cycle from greed to fear.”

“In terms of our “actively investing in equities”, yes, despite my concerns we are indeed engaged with the market. However, our bias is toward the areas that benefit from a cheapening of the dollar and where the present powers-that-be will be directing their attention going forward… I.e., commodities, energy, financials, materials, industrials, and non-US developed and emerging economies…”