Macro Update: Double Dip Off the Table, as long as…

In technical analyst jargon, our macro index has (per the graph below) broken through resistance (up 6.12 points this week) and successfully tested that line (now support) over the past three weeks, in continuation of the uptrend off of its June 2020 low.

I.e., the macro backdrop looks encouraging, and, purely technically speaking, it may indeed have legs (although failed breakouts are common, regardless of the asset/index being analyzed): 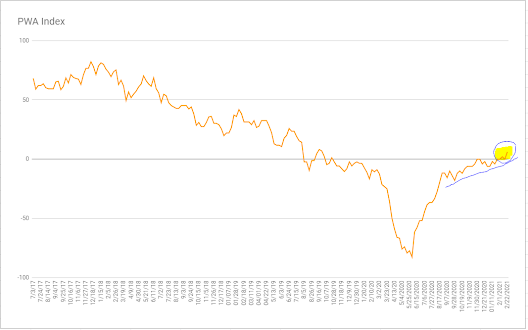 Of course, before we release the pigeons we’ll remember that, were it not for a few $TRillion of government and Federal Reserve largesse over the past year, our index would be plumbing all time lows. Which begs the question, is it indeed ultimately sustainable?
Time will tell…
Our positive needle movers this week were:
Retail Sales (read $600 stimulus checks):

The Producer Price Index (yes, that’s inflation [or reflation], but at this juncture we’ll score it a positive):

Capacity Utilization (factories are having to ramp up as folks buy stuff):

Sector/SPX ratios (4 of the 6 cyclical sectors we track have bested the SP500 of late [a notable turnaround over the past couple of weeks]):

Two of our inputs offset the positive thrust, a bit:
Mortgage Purchase Apps:

Here again is that mortgage rate graph I shared in this morning’s note:

And, of all things, housing starts:

However, permits were most impressive (although the concentration was in multi-family units):

A macro presentation these days would be incomplete without a look at the amazing rally we’re seeing in commodities…
Bloomberg Commodity Index:

So, yes, the latest move in commodities plays beautifully into our thesis, as well as our core portfolio allocation. And, yes, demand is a factor… However, the latest surge has much to do with a presently huge lack of the capacity to deliver all the stuff.
We’re definitely seeing it — in more than just commodities transportation — in the unusual divergence in our Cass Freight data. Note that despite shipments rolling over of late (top panel), expenditures have been shooting higher (bottom panel):

“It has rarely been more expensive to move sugar, coffee and copper around the world by sea.

Ocean freight rates began to soar last summer, and haven’t let up. That is partly because consumers, unable to spend money in restaurants, have splashed out on goods that move by sea. Retailers and manufacturers, meanwhile, have rushed to rebuild inventories.

The shortage of 40-foot steel shipping containers has snarled global supply chains for commodities, hiking prices for some raw materials. That is of interest to investors and economists, who have been on the watch for signs of inflation after governments and central banks flooded markets with cash to bolster the pandemic-hit global economy. So far, there hasn’t been a big increase in consumer prices.”

“Traders moving goods from East Asia to Europe are paying more than six times what they did last April. Rates between the two regions shot up to $8,455 per 40-foot container on Wednesday, according to an index compiled by Baltic Exchange and Freights, an online freight marketplace. That is the highest level recorded since the index was launched in 2016.”

Speaking of the Baltic Exchange, its “Baltic Dry Index” is another one of our inputs. While its week over week move was impressive, it yet remains a neutral input in our scoring system:

Bottom line, things are looking up, as is inflation. And we can assume that as long as the stimulus spigot remains wide open, a double dip recession is off the table.

With regard to markets, in terms of equities, they love government spending, but they loathe higher taxes and regulations (both coming soon to a theatre near you). And, at this stage of the cycle, and at present valuations, higher interest rates are anathema! Which, as we’ve been illustrating, is presently a real problem…

Here from this week’s main message is how the Fed, I’m quite certain, will ultimately have to deal with it:

“…the question: Will the Fed allow markets to collapse under the weight of rising yields, or will it step in with aggressive yield curve control and, in the process, push real rates (nominal yield minus inflation) deeply below zero? Which would involve either printing yet more money with which to buy bonds, targeting the long-end of the yield curve, or selling the short-end and buying the long-end (Bernanke’s “operation twist”), or both.

Make no mistake, given the systemic risk of rising nominal yields, they have literally no choice but to do one or the other, or both.”

Stay tuned, stay hedged, and have a nice weekend!
Marty