Like no other time in history, stock markets have the support of policymakers.

Years of business cycle manipulation, resulting in persistently low interest rates, have established stocks as the perceived only game in town to capture yield and to beat inflation.

In fact, or in addition, it’s little stretch to say that stocks these days in the eyes of many possess money-like qualities, as people succumb to the allure of ever-rising prices supported by ever-present “money” printing and move their life savings into the market.

The Fed, having boxed themselves (and, alas, the economy) into a place where the world is so heavily-leveraged against stock prices, and, now, everyday folks (in terms of perceived safety) mistake stocks for money, have — in their minds — no choice but to do everything possible to keep the market levitated virtually ad infinitum.

For the moment, while policymakers’ backstopping stocks is plenty to like all by itself, it would indeed be a stretch to, at this time, confidently expand a list of good reasons to own them — in the aggregate, that is.

On a sector by sector basis, however, absolutely, when, for example, we consider infrastructure spending on the horizon, and, thinking globally, when we branch beyond U.S. borders, there are indeed opportunities in stocks to be thoughtfully exploited going forward.

Side note (with the above — policymaker intervention — in mind):

I’m typing this letter from our little mountain getaway. And as I look out my window onto tree branches bending under the weight of new fallen snow, I find myself thinking about how critical winters are to the health of the forest. 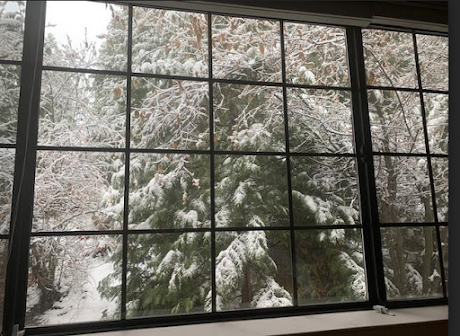 While we love the summers, the freedom to roam, the many experiences and the joys they bring, we know full-well that without winter’s freeze — without the stillness, the hibernation, the rejuvenation it ultimately spawns — there’d be no lush beautiful springs, and mountain life would be little more than a hot, dry, flammable experience.

The business cycle was once viewed much like nature’s cycle. And while, arguably, few folks still see it that way, I fear (as policymakers foster ultimately drought-like conditions) that it remains the appropriate metaphor…

Here, in its entirety is a brief post I wrote back in 2012 titled Lessons of Nature:

As I’ve expressed herein ad nauseam, loss is an all-important economic concept. Loss teaches the losers, and the observers, how not to do things. Loss clears markets of excesses born of gluttony and greed.

Nature forever offers the best metaphors for life, and, as follows, for business and economics as well.

“A survey on the loss in the Northern Hemisphere of large predators, particularly wolves, concludes that current populations of moose, deer, and other large herbivores far exceed their historic levels and are contributing to disrupted ecosystems.”

Modern-day fiscal and monetary policies are designed to neutralize the natural culling effect of economic contractions—plausibly leading to the disruption of the naturally-cyclical economic system.

“The research, published recently by scientists from Oregon State University, examined 42 studies done over the past 50 years. It found that the loss of major predators in forest ecosystems has allowed game animal populations to greatly increase, crippling the growth of young trees and reducing biodiversity.”

With loss out of the equation (via subsidies and bailouts), we effectively mitigate creative destruction. We, in essence, severely limit the opportunities for nimbler competitors—and the consequent benefits to consumers—that would otherwise occur during economic contractions.

“In recent years, OSU researchers have helped lead efforts to understand how major predators help to reduce herbivore population levels, improve ecosystem function and even change how herbivores behave when they feel threatened by predation — an important aspect they call the “ecology of fear.””

The threat of loss, the “ecology of fear”, engenders thoughtful calculation. Knowing there’ll be no compromising the taxpayer to rescue them from their mistakes, corporate execs would painstakingly assess the risks of their prospective ventures.

“In systems where large predators remain, they appear to have a major role in sustaining the diversity and productivity of native plant communities, thus maintaining healthy ecosystems.”

A truly healthy economy is dependent upon the knowledge among all players that regardless of how deep into woods they venture, they’re entirely on their own.

Well, unfortunately, the level of stock market support by policymakers isn’t the only thing we’re seeing “like no other time in history.”

While our own fear/greed barometer, as we’ve been reporting on the blog, says that optimism over stocks presently sits at the extreme, the following charts from Sentimentrader are chilling when we consider the history of what tends to happen coming off of periods of euphoric sentiment:

“Dumb Money” (the pejorative moniker for the retail investor) Confidence is at an all-time high: 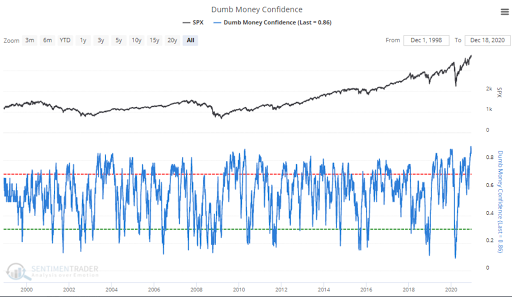 Inflows into Exchange Traded Funds are nearly off the chart: 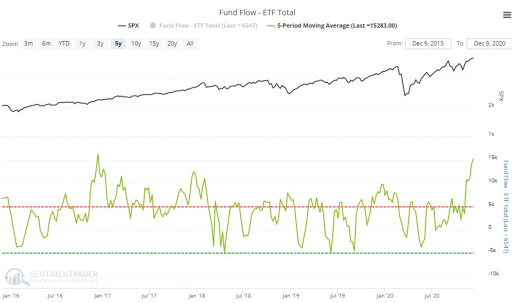 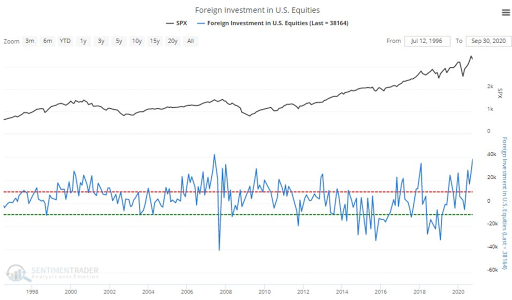 Mutual funds are sitting on their lowest cash reserves ever (imagine the selling they’ll have to do [and its impact on stock prices] should sentiment suddenly shift): 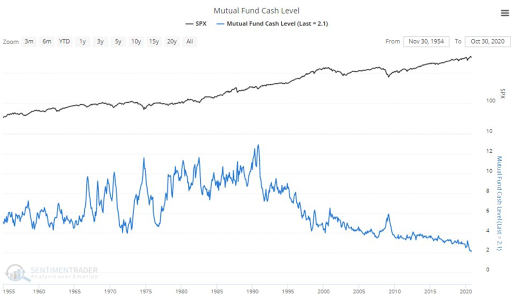 Active portfolio managers are leveraging their bets to historic levels: 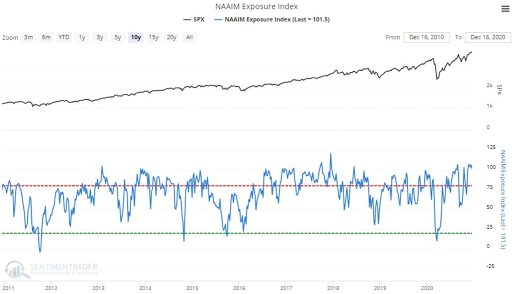 Options bets on a rising market are at an unbelievably historic high! 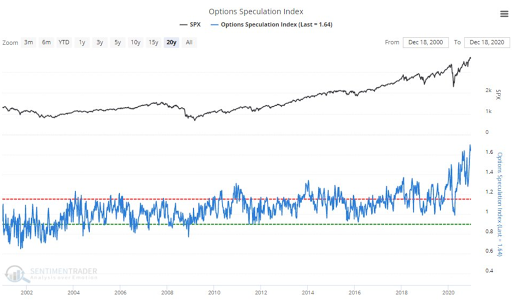 The lack of portfolio hedging among professionals (not us) is remarkable: 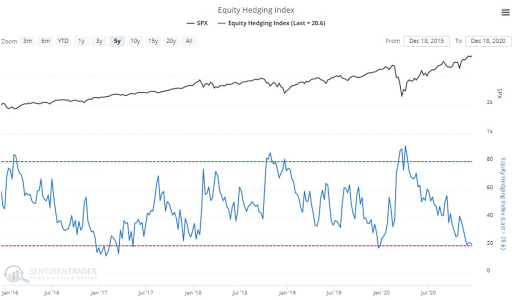 The level of the stock market relative to GDP (Warren Buffett’s favorite valuation metric) is way into all-time high territory: 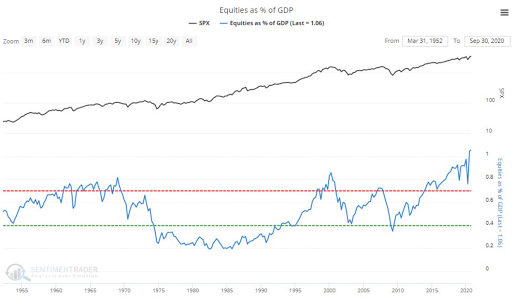 Concentration, as a % of total assets, in the stock market is right at historic (dotcom bubble) highs: 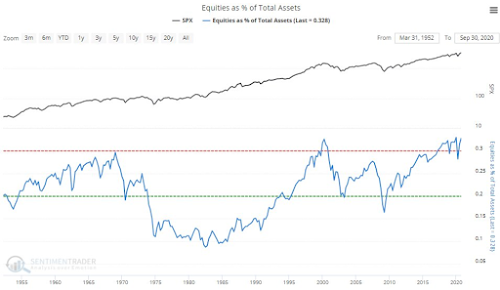 Ironically, there is one group out there who doesn’t seem to be buying into the euphoria.
And, while, clearly, few are paying attention, my, given this group’s vantage point, how they should be!
Corporate insiders (the company’s execs themselves) are staying far away from their own companies’ stocks: 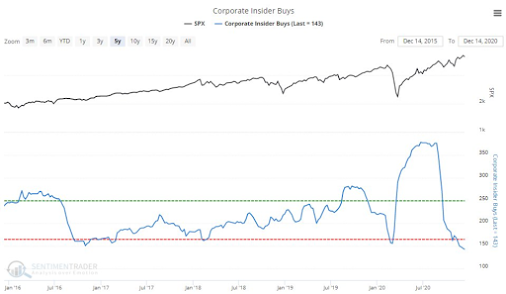 While I could supplement the above with at least as many additional valuation charts, sentiment charts, etc., you get the point.

The market is offsides like, frankly, I’ve never seen in my 36-year career!

Which, by the way, given all of that top-down support, in no way means that a major crash is imminent. It does mean, however, that, absolutely, the risk is there!

As you no doubt suspect, regular reader, the truly “ugly” in today’s setup is where we sit in terms of the long-term debt cycle. A topic we’ve covered at length over the past year+.

Therefore, I’ll simply cut and paste what I labeled “the proverbial icing on the cake” in our October 9 blog post, and featured in Part Three.“

“…the proverbial icing on the cake. 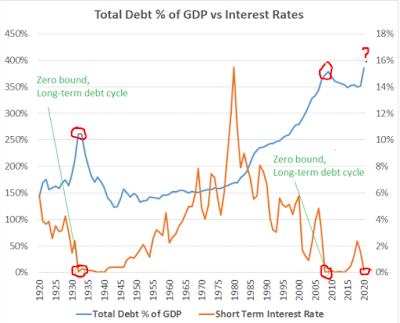 And I’ll close with a few excerpts from one of the most insightful and amazingly prescient books I read in 2020; Lee, Lee and Coldiron’s, The Rise of Carry.

These perfectly drive home my point in terms of what is truly “ugly” in today’s overall setup:
Note: In the context of the quotes below, you can replace “carry” with “leverage.”
Emphasis mine…

“The economic system is developing toward one in which the “wealth,” or market value, of any individual or individual entity is much more related to access (to the source of power) than it is to talent, merit, or more importantly the value of the individual or entity in terms of his, her, or its ability to contribute to increased living standards for society over time.”

“An obvious problem occurs if the period of positive returns from carry lasts “too long,” meaning that excessive amounts of capital will tend to be attracted into the carry trade to earn those abnormal returns. If this happens, it means that the risks are being mispriced.”

“…carry bubbles—which occur when carry trades have earned “too positive a return” for “too long”—always involve the mispricing of risk, which means the concentration of risk in the hands of speculators or entities that do not have sufficient balance sheets to bear those risks.

This becomes apparent in the carry crash when those speculators or entities are faced with the potential to be completely wiped out. The fear of contagion spreading from these bankruptcies across the markets triggers central bank action to stabilize markets, reduce volatility, and ultimately truncate losses for some carry traders who would otherwise have been bankrupted.

Thus central banks’ “success” in the short term in terms of stabilizing markets encourages further growth in carry trading, which in turn builds up even greater risks for the long term.”

In Part 5, and possibly 6 (if needed), we’ll zero in on where we see real opportunity in today’s unique and precarious market environment…