This Week’s Message: This Ain’t About Capitalism…

As I’ve suggested herein of late, it’s not a stretch to surmise that the near-term path of least resistance for the stock market is most likely higher (not a prediction mind you!).

I mean, when you consider what has clearly been driving stocks off the March low; rampant money printing, government stimulus, the promise of more government stimulus, Fed (corporate) bond buying (the real game changer!). And, lately, political certainty, the promise of effective vaccines on the near-term horizon, and the pending appointment of one of today’s most ardent advocates of easy money to the position of Secretary of the United States Treasury. Well, like I said, path of least resistance… near-term path, that is.

Oh, and, not to mention, across the pond we have an ECB President who promises to bring a monetary policy “bazooka” to bear come December. Plus there’s a UK/EU Brexit trade deal that — political brinkmanship aside — is destined to be signed within the next couple of weeks that’ll offer yet more fuel to an already blazing near-term bullish fire.

Note: There’s one glaring caveat (well, there’s more [a few fiscal cliffs come into play over the next few weeks/months] but one that’s glaring) to the bullish near-term setup I outlined above; there are literally trillions of dollars tied up in passive target date funds that operate a mechanical rebalancing process toward the end of every calendar quarter.

My point being, it’s been a very good quarter thus far for stocks, to the point where even if the advance were to cease right here, there’s a massive amount of stock-selling set to occur as Q4 winds down (as said funds rebalance back to their equity/fixed income target weightings)…

It’ll be interesting to see if, amid the already one-sided positioning presently implied by our sentiment (fear/greed) indicator, there’ll be the appetite (liquidity) to consume — at current levels — all that’s likely to be offered up come late December…

So, question, have I abandoned the camp of market dinosaurs who believe they know better, who say they’ve seen this play before, who foretell that it’ll surely end badly — the only question is when?

Well, I certainly haven’t used the word “know” while expressing my concerns over what lies below what remains a thin macro surface; 36 years of intimate market watching has cured me of all hubris when it comes to near-term prognostications. But, sure, among the plays I’ve acted in over the past 3+ decades one in particular had an eerily similar script to the one that’s on stage today. That would be the tech bubble boom and bust of the late-90s/early 00s.

And, yet, while the late-90s were characterized by a cohort of eager untutored online traders pushing a certain class of company through the proverbial roof, by valuations that defied historical logic (but were met with logical-sounding this-time-is-different narratives galore), by record concentration in the most-referenced cap-weighted benchmark index among just a handful of names, and so on — all factors that are on display in every bit as, and more, celebrated fashion today — there’s nothing that says it must all culminate in yet another 50% decline in the S&P 500, and an 80% crushing of the Nasdaq Composite.

Nothing at all, not even the fact that we live in a world where 20% of U.S. publicly traded companies’ cash flow can’t satisfy their debt service costs and where, speaking of the world, well… see for yourself… 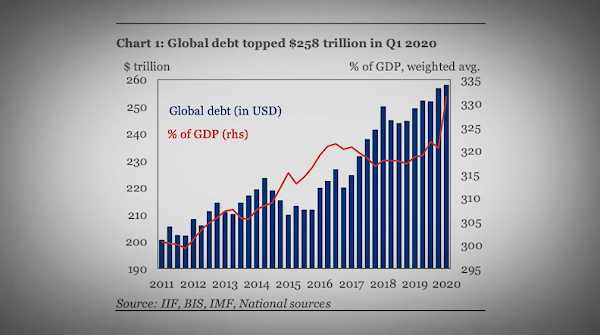 So, cutting to the chase, as clients have noticed, we’ve been incrementally rotating to where we believe the best opportunities — beyond the near-term — lie.

Over the past 2+ months we’ve clipped our utilities exposure on three separate occasions in favor of beaten down banks and obliterated energy stocks. We trimmed consumer staples a bit in favor of left-behind AT&T with its crazy-high dividend, we took a slice from the Eurozone and placed it with better-positioned emerging markets, and added a smidge more to the latter by taking a bite out of our healthcare exposure.

Note that all of the above involved rotating into areas that via their price action this year and/or their relative valuation represent what we believe to be insufficiently loved sectors/areas, given the setup that lies ahead.

What I mean is, there’s nothing there that includes the names that comprise the record concentration I mentioned above, nothing, that is, that fits in the acronym FAANG (and M). For those who may be unfamiliar, that’s Facebook, Apple, Amazon, Netflix, Google (and Microsoft)…

Now, the guarded optimism — for certain sectors/areas — implied in the above moves aside, our core target to cash/fixed income remains for now at 18% and — in light of the utterly inorganic nature of what’s presently driving markets and the exacerbating of history’s greatest debt bubble — we’ll be hedging against a major decline with options well into the foreseeable future, I strongly suspect…

Well, it’s a shortened holiday workweek, so I’ll shorten this week’s main message accordingly and save for another day my rantings on the fact that much of what explains this year’s strong retail numbers amounts to a government stimulus-induced pulling forward of sales that would’ve otherwise occurred over the months/years to come, and that markets will have to ultimately contend with what therefore is in store during those months/years to come.

I’ll also hold off on explaining why a VIX above 20 suggests that all’s not nearly well, even at the moment, as above-20 VIX is where bad things tend to happen in the stock market.

And I’ll save for later the fact that our PWA Fear and Greed Barometer just scored a -80, which is a scary-high greed score; suggesting that we’re nearing standing room only on the bull side of the boat — a phenomenon that often precedes sinkings.

Yeah, I’ll circle back later and outline why, amid the justifiable consensus optimism surrounding the near-term market setup, we’re justifiably cautious with our relatively high fixed income weighting that, when combined with our commodities exposures, keeps 41% of core mix out of stocks altogether.

So then, I’ll just finish up this week’s message with the following bit of irony…

Make no mistake, the historic debt bubble we’re presently operating amid — literally the third great financial market bubble in merely the last 20 years — and, not to mention, the global corporate debt volcano depicted in this essay’s featured chart, would be utterly impossible were it not for the aggressive monetary policy actions of the U.S. Federal Reserve and, with regard to the above chart, its global contemporaries.

I mean, capitalism — a place where insolvent institutions are allowed to fail, and where aggressive risk-takers, when they’re wrong, suffer the consequences of their ill-conceived ways — has, by definition, virtually nothing to do with where we find ourselves today. Actually, we simply couldn’t be here were capitalism allowed to do its thing…

And, yet, here’s what our incoming Treasury Secretary and former head of the Federal Reserve recently had to say about capitalism:

Now, to be fair, she stated the above within the context of climate change, and I, therefore, contemplated not quoting her herein. But I just couldn’t dismiss the utter irony in her out-of-climate-change-context comment regarding making sure the “benefits of growth are widely shared.”

This is the very same individual who said the following during a video conference with bankers in 2016:

“The Federal Reserve might be able to help the U.S. economy in a future downturn if it could buy stocks and corporate bonds.”

Well, legally, “it” couldn’t… Although, with regard to corporate bonds, “it” currently is, nevertheless…

So, tell me how on Earth an artificial pumping of asset markets could ever result in the benefits of growth being more “widely shared.” Arguably, such acts largely, if not entirely, explain the canyon that presently separates society’s haves and have nots…

While I have no doubt, sincerely, none, that Ms. Yellen has the very best of intentions, clearly, her academic genius notwithstanding, she lacks appreciation for the history of markets, dynamism and American success, and is dangerously ignorant of the concept of moral hazard (i.e., the lack of incentive to guard against risk, vis-à-vis the belief that the Fed will always come to your rescue).

All that said, as interested portfolio managers, we remain very cognizant of this strange new world we live in: One where the Fed — a disinterested (in terms of complete lack of interest in personal financial profit) “investor” — is now a buyer of publicly traded corporate securities whenever it deems necessary.

Happy Thanksgiving to you and yours!