While 6 of the 49 inputs to our proprietary macro index saw their scores change this week, they essentially balanced each other out: Our overall score remained stuck at -6.12 for the third consecutive week: 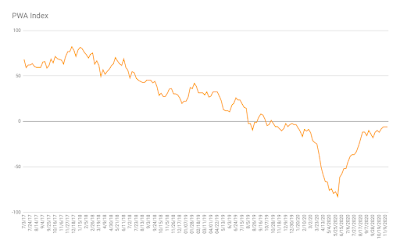 The price of copper continues its impressive breakout above its downtrend from mid last year. Which, given its industrial application, speaks positively about economic prospects going forward. However, it no doubt reflects supply issues (Chilean copper miners on strike, for example) as well, the extent to which is open for debate:

Our analysis of the equity performance of various sectors vs the S&P 500 reflects improvement among those more sensitive to the economic cycle; energy and financials in particular:

Stuff that scored worse:
Mortgage Purchase Applications continuing to roll over is not something we want to see. That said, it could very well be as much (if not more) about lack of inventory as it is about a looming slowdown in the residential real estate market:

And, lastly, while we saw overall improvement in terms of equity sector performance relative to the S&P 500, the consumer staples/consumer discretionary ratio tells a different story:

Here are a few other inputs — not experiencing score changes — worth mentioning…
The University of Michigan’s latest Consumer Sentiment Survey has taken a turn in the wrong direction; suggesting that the consumer may be feeling a bit wary of winter. Not something we want to see heading into the Christmas shopping season:

Weekly jobless claims came in at 709k, vs 757k the week prior. Continuing claims, at 6.79mm, fell for the 7th straight week. Pandemic Unemployment Assistance saw 298k new filings this week, down from 362k, while those still on the rolls totaled 9.3mm, down almost 1mm. And, lastly, those receiving Pandemic Emergency aid remain at 3.9mm.
While improving numbers are indeed welcome, the fact that 20 million Americans remain on some form of unemployment assistance is nevertheless mind-boggling:

Again, small business optimism held up overall, however, capital expenditure intentions (like hiring plans [above]) moved in the wrong direction last month — just not quite enough to steal a point from our index:

And, giving credence to the notion that copper’s increase may have something to do with supply constraints, the Baltic Dry Index (cost of shipping materials across the world’s oceans) declined for the 7th straight week:

While -6.12 isn’t far from positive, the evolving character of much of what we track suggests that it may be awhile before our macro index sends a bullish signal about the state of general conditions.
Confirming evidence that the distance to “normalcy” is greater than some might have us believe shows up in much of data that we don’t formally score, yet we assess nonetheless. Like the Fed’s Senior Loan Officer Survey…
October’s was released on Monday, and, well, banks aren’t feeling at all rosy about the credit worthiness of businesses or consumers these days.
Respondent’s said that “on balance, they tightened their standards on Commercial and Industrial Loans on firms of all sizes”, plus they reported weaker demand from their customers for the same. They also reported tighter standards and weaker demand for all major categories of commercial real estate loans.
As for households, standards were tightened on residential mortgage loans, as well as on auto, credit card and other consumer loans: 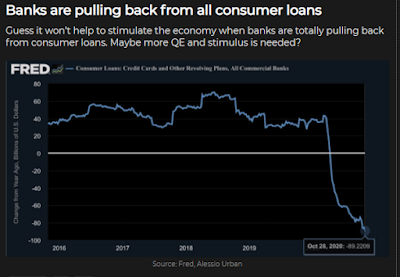 Clearly, the latest commentary from senior loan officers falls far short of suggesting that a booming consumption-driven economy awaits.
So, I dared to use the term “normalcy” above; implying that indeed there is a pathway that would take the economy to, say, pre-covid conditions. Well, folks, forgive me, but I really didn’t mean it. As, virtually without question, reality says otherwise; per the following teaser from my latest musings.
I’ll clean up the entire narrative — a synopsis of our current macro, and market, thesis — and get it out to you in the very near future, likely in next week’s main message.
Oh, and by the way, the punchline isn’t as dreary for markets as this excerpt might imply:

We carried history’s largest, and worst quality, corporate debt bubble into 2020 — pre-covid, that is. The setup was for an economy that was already exhibiting notable fragilities to inspire a significant amount of central bank intervention that may very well have carried financial markets through the election year, while effectively delaying the inevitable demise of the longest economic expansion on record.

However, the market-friendly tools at the Fed’s disposal were highly unlikely to suffice in keeping markets afloat much beyond 2020, given the fact that with trillions on its balance sheet and having already pushed interest rates to nearly the zero lower bound, its actions would likely have done little more than temporarily extend what was by then an illusion of economic strength. And the end of expansions (read recessions) are virtually always attended by painful contractions in asset prices.

But then came Covid-19, which essentially pulled reality forward, and, at the same time, gave world central banks political cover to literally breach all market and capitalist convention, even break the law in the case of the U.S. Federal Reserve — as it resorted to buying corporate bonds; something prohibited, and for good reason (read moral hazard), by the Federal Reserve Act of 1913.”

And have a great weekend!
Marty