Our PWA Macro Index came in unchanged this week at -11.76. 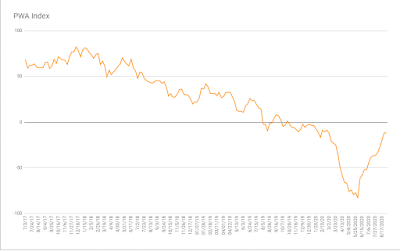 Only three inputs experienced change sufficient to adjust their scores. Two added a point, one saw a two-point deduction.

In this week’s main message I suggested that aggressive monetary easing amid a deep recession occurring amid already-aggressive easing, and severely constrained corporate balance sheets, is, when it comes to anything other than inflating asset prices, akin to pushing on a string.

“Capital needs to cost something for a dynamic economy to work.”

Here’s the excellent economist/strategist John Hussman commenting on her comment:

“The only activities enabled by zero yields are those that can’t survive even a tiny hurdle rate. They’re activities where leveraged finance is the primary cost of doing business. That’s how an activist Fed has created a yield-seeking bubble that puts 1929 to shame.“

Notice the panel with the yellow line in two of the three graphs above; that would be a measurement of the rate of change for the featured data point. That’s key!

“We were talking about ways of understanding/articulating “rate of change” in the data.

“Here’s one way to think about it:

When you’re driving down the road, while entering the highway, when the coast is clear you press on the gas; i.e., you begin accelerating; i.e., your speed increases relative to your speed before, and as, you entered the highway. In other words, the rate of change of your speed picks up on a steady and consistent basis right up until you reach cruising speed.
If you see flashing (hazard) lights up ahead, and/or some sort of congestion, or commotion, you begin to slow down; i.e., you’re still moving forward but your rate of change is now decreasing as you sense potential danger ahead. You may ultimately have to come to a full stop… God forbid you become a participant in the “crash”.. It happens!

When we analyze the data from a rate of change basis, we’re constantly receiving signals of what lies ahead… Like we discussed today, retail sails while higher last month, saw a declining rate of change… possibly telling us something about what’s on the road ahead…

As for today’s screwy environment, you might liken it to entering a very busy intersection, where the signals are out and everyone’s nervously inching forward, trying to establish that it’s their turn, but scared to death that someone coming from another direction might fail to heed the risk/reality of the situation and “crash” right into them… Fits and starts, sudden stops, rate of change rising, then abruptly falling, yada yada…””

In other words, while reopening and renormalization efforts will reflect progressive improvement characterized by some choppy clustering in activity on a monthly basis (auto factories going from shut to open for example), there remains a discrete dearth of identifiable catalysts for driving a protracted rate-of-change acceleration – particularly as the recovery in both macro activity and equity price performance has clearly favored those least levered to humans (who are, by and large, expensive, aren’t immune to highly contagious respiratory viruses and carry a proclivity for lawsuits).”