Founder & Co-Chief Investment Officer
In this morning’s message I noted that the trading session had begun with a markedly better look than yesterday’s. Well, by the end of the day, other than a few more sectors finding their way into the green, the internals — just like yesterday — were nothing befitting a healthy bull market.


The message within equity market technicals is that the upside momentum has been losing steam of late: The MACD (an indicator I’ve featured numerously in past videos) is presently flashing sell signals for 82% of the stocks featured in the S&P 500 and 57% of those in the Nasdaq Composite. As for MACD buy signals, we’re looking at only 3% and 6% of members within the two indices respectively.

Okay, so, my relentless party-pooping narrative of late notwithstanding, stocks — well, let’s say the major averages — continue their march further and further into the outer reaches, beyond anything remotely considered fundamentally viable. I’ll circle back on that in a minute…


The monthly Purchasing Manager’s Indices (PMIs) for the Eurozone and the US were released this morning: The narrative around the latest numbers, and, frankly, the reactions within equity and currency markets today reflect a gross (and somewhat dangerous, in my view) misunderstanding of what the latest readings actually reflect:


The world seems to believe that if a PMI for, say, the Eurozone goes from 31.9 in May to 47.5 in June, that the Eurozone economy actually improved in June. Again, the tweets and the headlines today presented just that narrative, and markets rallied accordingly. When, in reality, nothing could be further from the truth. You see, any reading below 50 denotes contraction, never expansion. But the prevailing belief is that if we went from 32 to 48, the economy improved by a whopping 16 points. Nope! The data are measured on a month over month basis. Meaning we start fresh every month. A June reading of 47.5 actually means that the economy continued to shrink in June. Only a reading above 50 can be construed as net positive. The best one can say is that the rate of contraction slowed in June over May, vs the rate for May over April, but that’s still contraction nonetheless.


So, in a nutshell, the Eurozone economy continued to shrink in June. There was literally no bounce. Same thing, alas, for the U.S.: Its composite index came in at a recessionary 46.8, after printing a 37.0 in May.


I know what you’re thinking; “but, but Marty, we’re opening up, things are getting better in a hurry, give it another month and we’ll be back in expansion mode!”


Well, I sure hope you’re right. And, yes, the initial numbers indeed suggested that folks were itching to get out and help the economy.


However, the latest — at least from the restaurant sector — is suggesting that folks may have already sufficiently scratched that itch.


Here’s Open Table’s data on “seated diners” — online and phone reservations, and walk-ins — for the US, updated as of yesterday: 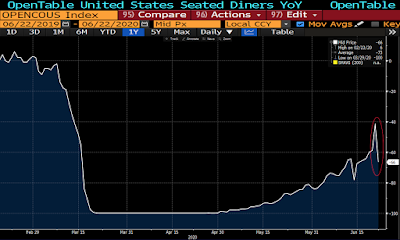 Back to the fundamental viability of the current state of U.S. stocks: I’ll close with the following from an interview this afternoon with RealVision’s managing editor, and, trust me, an exceptionally smart, always objective, guy, Ed Harrison:

“You have animal spirits gathering and people are just piling in. The Fed has unleashed the animal spirits, and in the midst of what I would consider a depression we’re seeing the Nasdaq hit new all time highs.

Now we’re talking about Microsoft, a 1.4 trillion dollar market cap company trading at 35 times earnings; there’s no justification that you can make given the level of earnings that Microsoft is likely to have in terms of growth.

It’s a bubble, pure and simple. It’s driven by the Fed, it’s driven by liquidity, and it will end very badly.”