The Loss of a Tailwind

On multiple occasions herein since late last summer, when we became cautious on stocks, I’ve featured the data around the fuel share buybacks had supplied for the market, at, in too many instances, the expense of once-healthy balance sheets.

Here’s the one showing the inflow to the market resulting from buybacks versus from more “traditional” channels: 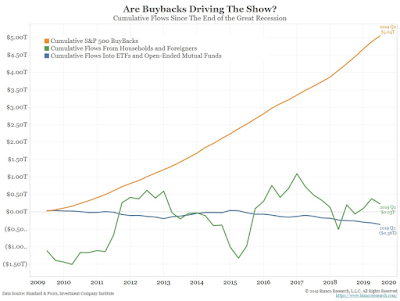 Yes, buybacks were huge during the entire bull market!


And here’s the one illustrating the volume of share buybacks and dividends exceeding companies’ free cash flows (i.e., they borrowed to fund them): 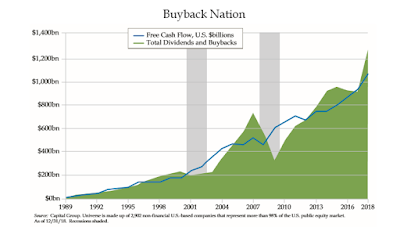 
Quotes of the Day: This Has Our Attention!

“When prices have been driven by a lot of leveraged buying and the market gets fully long, leveraged, and overpriced, it becomes ripe for a reversal. This reflects a general principle: When things are so good that they can’t get better—yet everyone believes that they will get better—tops of markets are being made.”

Leveraged share buybacks (companies borrowing to buy back their own shares) are the first sentence above by definition. And this very much has our attention!

Here’s Investopedia on the topic:

“Between 2008 and 2018, companies in the United States spent over $5 trillion buying back their own stock, or over half their profits. As a result, more than 40% of total EPS growth has been from share repurchases.

Leveraged buybacks have made a big comeback in the U.S., where share repurchases have exceeded free cash flow since 2014.

The buyback boom has increased the risk for both bondholders and shareholders. Even investment-grade companies have been willing to sacrifice their credit ratings in order to reduce the number of shares. For example, McDonald’s, whose executives depend on EPS metrics for 80% of their pay, has borrowed so heavily to fund buybacks that their credit rating fell from A to BBB between 2016 and 2018.”

And here’s from Bloomberg today:

“Data compiled by Goldman Sachs Group Inc. shows that almost 50 U.S. firms have suspended existing authorizations in the past two weeks, according to a note from its strategists. The firm’s buyback desk estimates that $190 billion has been suspended by S&P 500 companies overall — roughly 25% of last year’s buyback
total.

“Chris Wood, global head of equity strategy at Jefferies, says he’d be amazed if there wasn’t, at minimum, a retest of the previous lows, in part because repurchases are drying up.

“The problem for the U.S. equity asset class is that it
began the downturn so overvalued at a record high valuation to sales,” Wood wrote to clients last week. “The other problem is that the leveraged share buyback game has ended, which also means an end to the phony earnings growth it produced.””

Given the major contribution share buybacks made to the longest-ever bull market, I don’t think we can underestimate the headwind their absence presents going forward…