Stats of the Day: What’s up (or down as the case may be) with the dollar?

One of 2017’s conundrums has been the non-rally in the U.S. dollar.

Here’s a look at the net long position among futures speculators in the U.S. Dollar Index over the six months leading into this year:

Traders were the definition of bullish on the dollar to start the year.

Here’s the index itself year-to-date:

As I’ve been charting here on the blog, while the setup for U.S. stocks looked good coming into the year (still does), the setup for the Euro Zone looked every bit as good, if not better (still does). While stocks and economies don’t — particularly in the short-run — always correlate, the relative (to the U.S.) data coming from the Euro Zone of late support the setup, as well as explain the currency action.

Here’s some of the latest soft data:

Along with the ISM Surveys (which we cover here often), the Markit PMI Surveys (monthly surveys of purchasing managers the world over. Above 50 denotes expansion) hold great sway in terms of the views of economists, as well as investors and traders.

Courtesy of Bespoke Investment Group, here’s a look at the latest composite (includes manufacturing and services) as well as the services survey results by themselves:

From Markit itself, here’s a chart of the move in the Euro Zone’s retail sector PMI. I look for the consumer spending line to follow: 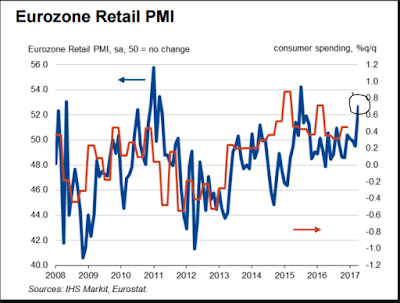 And, lastly, this morning’s U.S. jobs number came in at 211k, besting estimates by 26k. Now this is the kind of thing that tends to boost a currency. And, as it should’ve, the dollar rallied on the news. However, as I type it’s taking it back, and some.

Clearly, in the near-term, currency traders see better opportunity outside the dollar But, I must warn you, they are a fickle bunch!

P.s. A weakening dollar isn’t necessarily bad for our portfolios…