This Week’s Message: A Snapshot of What We Think We’re In For — And — Brief Narratives on Gold, Ag and Non-US Equities

For this week’s main message I’ll share an excerpt from my latest internal log entry, where I briefly update our theses on individual positions. Specifically, non-US equities, gold and ag futures. But first, my thoughts on today’s market reaction to the release of the Fed’s latest meeting minutes.

Before I heard or read a peep on the Fed’s notes, it was, at least initially, clear to me that they intend to remain very accommodative. I got that signal from the immediate move in the dollar (plunged):

And in gold (rallied):

And in emerging market equities (rallied):

And in Asia-Pacific equities (rallied):

And in European equities (rallied):

And in U.S. equities as well (rallied):

But then I read the summary of the minutes, and, contrary (seemingly) to that initial market reaction, the Fed seems committed to tapering their asset purchases in the coming months. Although they were uber-careful in pointing out that this in no way shape or form was to be seen as a precursor to a rate hike.
The latter immediately caught the market’s attention. However, on further contemplation, US stocks retraced all of those kneejerk gains, and some (now down 0.33% on the session).
While Emerging Markets and Asia-Pac are still clinging to their gains on the day (up 0.68% and 0.05% respectively). Europe’s turned a bit red (down 0.17%).
So why the attention herein on the short-term noise? Well, call it a snapshot of what we believe the Fed’s up against, and markets are poised for, in the months/years to come.
Here’s that snippet from our log:
————————————————————————–

VPL: The Developed Asia Pacific region, sporting notably more compelling valuations and dividend yields vs the U.S., has much ground to make up on a long-term relative return basis.

Then the outperformance of Asia-Pac from the bottom of the tech bubble bear market to where the subsequent bull market peaked. And the declining dollar:

Then the underperformance of Asia-Pac from the bottom of the mortgage/real estate bubble bear market to the peak in February of last year. And the rising dollar:

And from that peak to current (note the circles where Asia-Pac peaked and the dollar bottomed back in February of this year):

GLD: Gold, while it has been somewhat of a ball and chain on the portfolio since last July, is uniquely positioned to do long-term well given our thesis. I.e., to repeat:

“While it’s my view that the Fed literally cannot (without crashing the markets) tighten monetary policy to any consequential degree, I nevertheless believe there’s upside risk in interest rates. Although there’s a serious pain point where the Fed steps in. I think it could be as low as 2% on the 10-year treasury, although equity market action will ultimately make that determination. I.e., if the 10-year pushes to 2% without a major selloff in equities, rates can go higher.”

The fed stepping in (yield curve control) amid structurally rising inflation is the quintessential setup for gold. Plus, it tends to perform notably better than equities during protracted bear markets as well, essentially providing a potential hedge against consequentially declining stocks. And of course gold correlates demonstrably negatively with the dollar (its monthly correlation coefficient from March 2009 to present is -.63).

While, per the above, gold’s long-term prospects are compelling, it is clearly at risk between here and the Fed’s pain point on the yield curve. Which has us presently hedging the GLD position with put options.

DBA: Owning ag futures going forward is a virtual must, all things considered. In a nutshell; challenges related to inflation, supply constraints, geopolitics, global demographics, and weather patterns all play beautifully for a sector that (like the rest of the commodity space) has been unloved for the past decade+, and, therefore, is now hugely under-owned.

FEZ: Essentially the same case — valuations, dividend income, ground to make up, negative correlation to the dollar — made on behalf of our Asia-Pac exposure can be made for developed Europe as well. I’ll add, and it can be added to the Asia-Pac narrative as well, that when investors wake up to the reality that U.S. stocks have reached historically-bubbly extremes — either at the peak of today’s bull market, or during (or subsequent to) its demise — a protracted period of underperformance for U.S. equities in the aggregate will unfold.

VWO: Emerging economies house the largest, youngest concentration of Earth’s humans. With, as the word “emerging” denotes, greater growth potential vs — as the word “developed” denotes — developed economies. Of course with growth comes growing pains, which makes for greater volatility and prolonged periods of underperformance.

As has been the case with non-US developed markets, emerging market equities have seen an extended period of relative (to the US) underperformance. The same case with regard to valuations and dividends is to be made here as well, while the negative dollar correlation case is even stronger (significantly!).

——————————————————————
Note: Our long-term relative bullishness over non-US equities does not have us shunning opportunities here at home. Although the factors that inspire a higher non-US weighting indeed influence our U.S. sector allocations as well. I.e., our top 4 U.S. positions, in order, are materials, industrials, energy and financials. While, in the interest of prudent diversification, we still maintain positions in healthcare (our #5 position), consumer staples, tech, communications, etc.
FYI That’s a notably different posture compared to where we were at the February 2020 market peak, when 45% of our U.S. equity positions were concentrated in the utilities, healthcare and consumer staples sectors — per the signaling from, among other things, our own macro index then (red dot) vs now (blue dot): 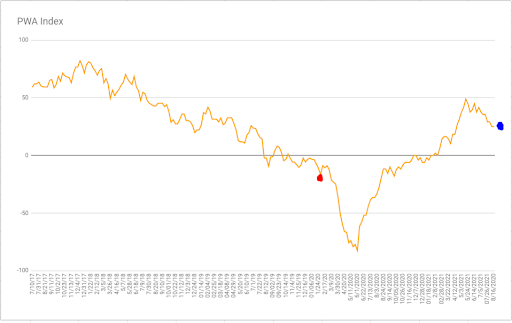