This Week’s Message: The Fed “Threatens”

You’ve heard or read me express, multiple times of late, that if there were only one element in markets that I could build a macro thesis around presently it would be the U.S. dollar.

Today, by the way, the dollar saw its biggest one-day surge in over a year.
Here’s a 3-day chart of the dollar index: 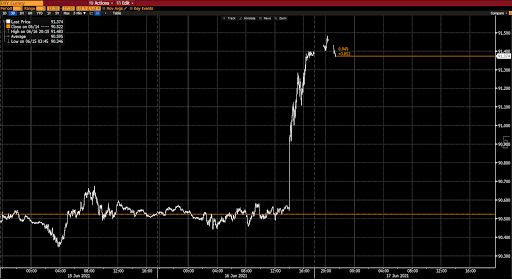 You’ve also heard me say that a notably stronger dollar would be hell on the stock market.
Here’s a 3-day chart of the S&P 500 E-Mini Future Contract: 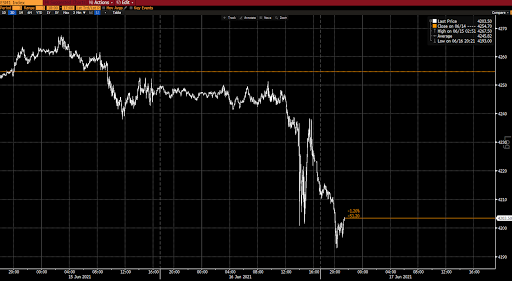 And it’ll play havoc with commodities. 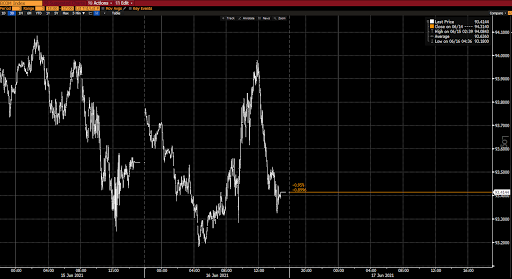 And recall what I keep repeating about the foreign currency/debt risk of a rising dollar.

From our latest inflation narrative: 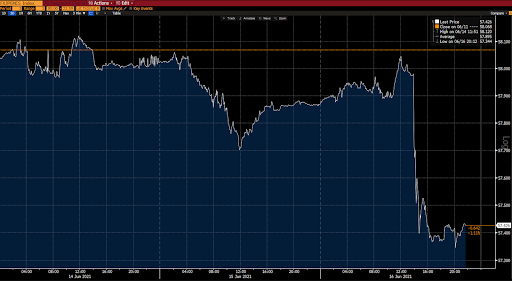 So what got the dollar rising and the other stuff featured above falling today?
Well, it was this afternoon’s message from the Fed that, while aside from tinkering with the rate they pay banks on excess reserves and in the overnight repo market, they anticipate lifting their benchmark rate off of zero sometime in the year 2023, and that they may even be inclined to cut back a bit on their monthly bond-buying frenzy by this year-end.
Now, frankly, there’s nothing historically-speaking consequential in terms of magnitude there. In fact, historically-speaking, it’s far less of a threat than one might’ve expected given the pace of growth, and inflation, of late.
Ah, but these are unique times for sure, and we’re staring down an equity market that trades at all-time high valuations (by most metrics) that truly only makes sense amid record low interest rates and a relatively weak dollar. And, not to mention, a debt bubble for the ages that if pierced by higher interest rates… well… suffice to say that the ramifications are not remotely something the Fed’s willing to risk — at any point, frankly.
Bottom line: Jerome Powell and company have truly backed themselves into the proverbial corner. I.e., should asset and currency markets even threaten to unravel due to what is, by historical standards, a mere placatory nod to those who see rising inflation as presently more than simply “transitory” phenomena, I highly suspect we’ll see the Fed walk back today’s dipping-of-their-toes, lickety-split.

We’ve been making the case for commodities herein (and within our core portfolio) for quite some time now. For clients, regular readers and video watchers the following sentiment expressed by one of the world’s largest traders in that space will sound very familiar:

“The head of trading juggernaut Trafigura Group said commodities are likely in a new supercycle, with high prices expected to last a decade or more.

The shift to electric vehicles and cleaner energy is
spurring demand for metals, said Chief Executive Officer and
Executive Chairman Jeremy Weir. Coupled with a lack of
investment in new supply, that’s ushered in a new era of
sustained higher prices for raw materials, he said.

“This is not a one or two-year phenomenon. This is a decade
or longer,” Weir said at the FT Commodities Global Summit.
Trafigura, the world’s second-biggest independent oil and
metals trader, posted a record first-half profit amid sharp
price swings and a demand recovery in markets rocked by the
pandemic.

Weir reiterated the Singapore-based company’s bullish
outlook for copper, the metal for which it is the No. 1 trader.
“If you want to electrify we are going to need more
copper,” he said. “And higher prices are the only solution.””

Lastly, here are a few related highlights from our latest messaging:

“China’s risking what you might call the beachball effect when it comes to the most ubiquitous industrial metal on the planet. I.e., as I’ve noted herein, they are actively attempting to tamp down its price. Overnight the government took another step by ordering state-owned companies to reduce their purchases of metals being released from strategic stockpiles. Copper made new multi-week lows on that news.

The beachball effect is a metaphor for what happens when you let go of an inflated beach ball that you’ve pulled as deep as you can below the surface in your swimming pool.“

“The following headline crossed my screen early this morning: “Paul Tudor Jones says ‘go all in on the inflation trades’”

Here are the bullet points from the interview with the hedge fund legend:

I.e., The “taper tantrum” was a term coined by ex-Fed Chair Ben Bernanke back in 2013. The mere mention at the Fed’s annual Jackson Hole meeting that the central bank was planning to provide less juice saw markets throw a bit of a fit — which turned out to be relatively minor and short-lived, by the way.”

“As for yours truly, if the latest signal from the bond market is correct, then things are running true to the script I’ve laid out in a video or two lately (watch this one from the 9:00 mark to the 13:00 mark): I.e., that, as inflation dips as bottle necks open up, I-told-you-so commentary like the above will abound. Thereafter, ultimately, I suspect we’ll settle into a structurally-rising inflation regime that will likely see the commodities space into what will turn out to be an extended bull market.“

“May CPI was released this morning, and, yes, the month-on-month numbers, particularly in the services space (far more sticky [as in stick around] than the goods space) support our thesis that this go-round inflation — at a somewhat higher level than we’ve grown accustomed — is likely to, well, stick around.“

“The difference “as I type” is that the stakes (the debt bubbles) are so huge that the Fed has left themselves no room for error, hence the literally buying themselves (with $trillions) a bullish setup that to ultimately “succeed” will require an inflating down of a historic debt pile while keeping the dollar, interest rates and credit spreads at bay.

This is somewhat similar (in terms of debt to GDP, interest rates, and need/willingness for government spending) to the setup, and to the policymaker reaction function, coming out of World War II. They essentially pulled it off back then, but not without a good deal of inflation and asset market volatility along the way.“