This Week’s Message: The Circle (Cycle) of Life (Economy), Charts That Trouble Me — And — Key Highlights

We don’t do forest fires in California — well, we don’t until we can’t stop em! And all of that don’t-ing, over so many years — which amounts to the dousing of every dousable flame as it begins to flare — promotes an over-forestation that sucks ever-more volume from the groundwater to the point where the inevitable period of drought allows the dreaded bark beetle to make waste of literally millions of sap-starved, defenseless trees. Creating mountains (literally) of combustible waste! Well, this last summer the mountains above Fresno suffered the worst death by fire in our state’s history.
Recessions and bear markets in stocks can be bloody, so to speak. And (or “therefore”), despite the great circle (cycle) of economy, really bright, academically-accomplished, politically-appointed individuals conduct themselves as if they’ve zero understanding of the concept of seasons, of decomposition, and of regeneration. No, indeed, their promise is to rid humanity of the discomfort of the dreaded economic downturn, of financial market storms. And to grace the populace with incomes, and investors with stock prices that — amid warm sunny weather ad Infinium — forever rise to the proverbial sky!
I suspect you know where to take the above diatribe from here…
Speaking of things that grow to the sky, for the remainder of this note I’m going to share the latest from my “charts that trouble me” file, then I’ll close with a few highlights from our latest messaging:
Covid Relief Money Rescued Corporate Revenues! 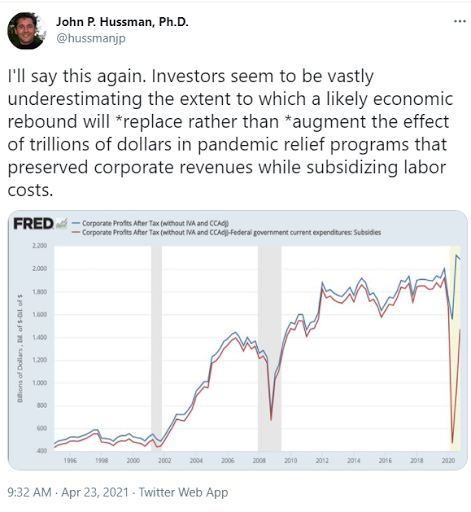 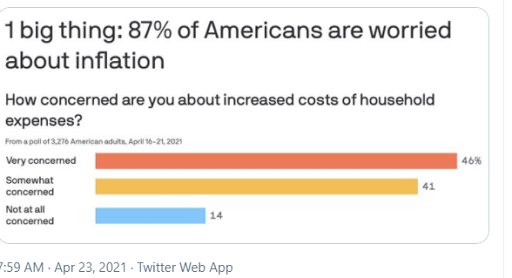 BofA’s private clients are all-in stocks — like never before! 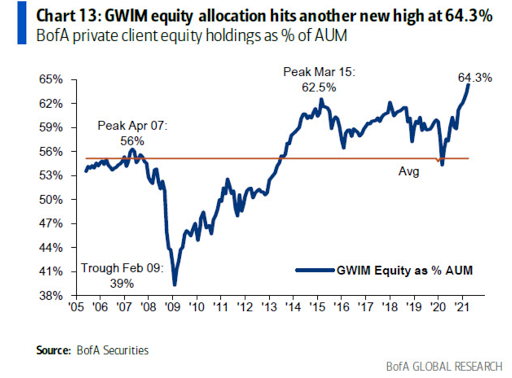 Inflation mentions are more than triple the norm during earnings calls! 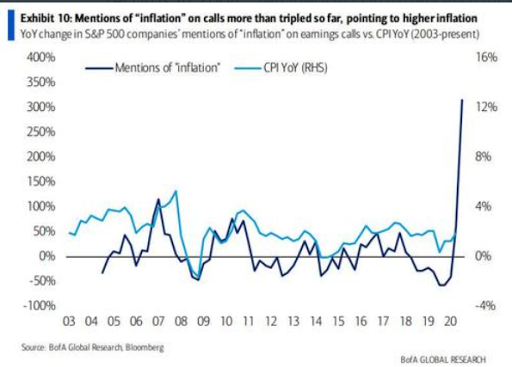 Borrowed money to buy stocks is at an all-time high! 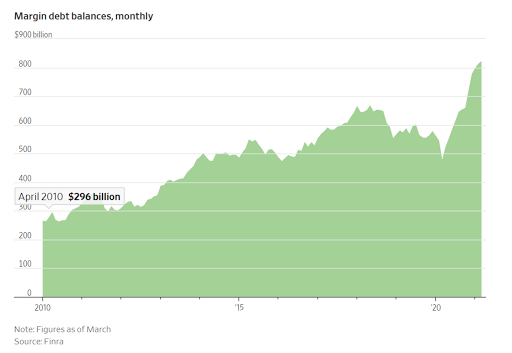 American households are in stocks like they’ve never been! 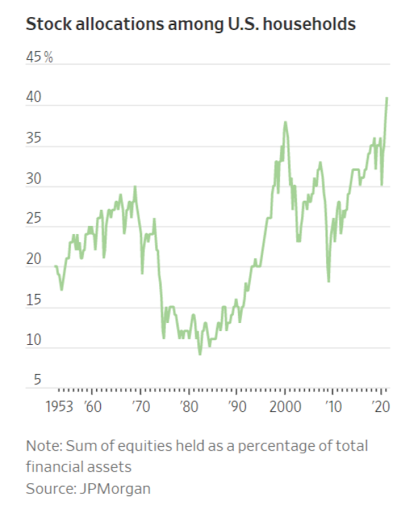 Government payments as a % of personal income are at an all time high!! 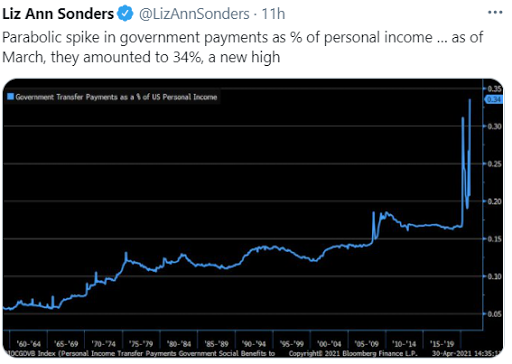 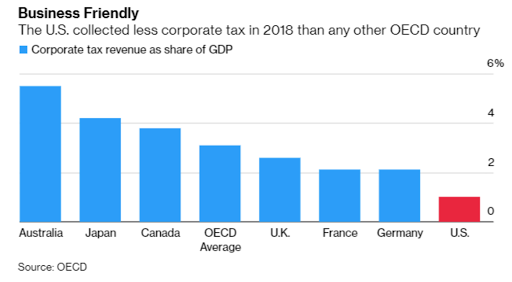 Manufacturers are paying hugely for their inputs! 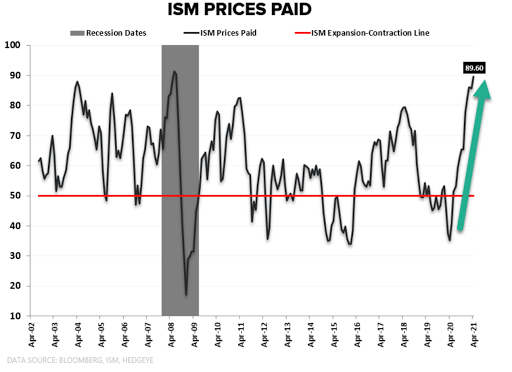 Corporate insiders are selling their own companies’ stocks on rallies, far more than they’re buying the dips!

“…due to government intervention, we’re seeing a massive pull-forward of activity. It therefore makes sense that we’ll feel a notable letdown at the point when activity that would’ve happened doesn’t, because it already did…”

“…the world (save for a few lingering Covid hot spots) is opening back up, and, yes, the thing we’ve been spending much of our time on herein — inflation — is, despite what the Fed would be so condescendingly to have us believe, on the rise. And if business is booming and you can easily pass your higher costs onto your end customer, all’s good…

Yes, yes, there’s the reality that the forces (money printing, government spending, debt) that held the ship together, getting us to this point, will have to be reckoned within I suspect the not too distant future!

Speaking of the Fed, this from popular macro thinker Muhamad El Erian (in a CNBC interview) should sound very familiar to clients and subscribers:

“The Fed is pinning itself in a corner by insisting that this is transitory on inflation pressures. All the evidence suggests that you should have an open mind.”

You’ve got to keep an open mind. Unfortunately because it is now hostage to a framework that has to be outcome-based I think the Fed has no choice but to insist it’s transitory. But I fear that this is persistent, that this is not transitory.””

“Clearly, the dependence-transfer argument is legitimate, although we must recognize that our dependence on fossil fuels — given all of their applications, including in the generation of electricity (still better than half of the world’s generation comes from fossil fuels), in the manufacturing of electric vehicles and their batteries, and, not to mention, in the mining of the metals and minerals that go into those batteries — isn’t going away anytime soon…

As for the growing dependence on rare earths, while the bulk of the supply indeed comes from outside the U.S., there are nevertheless a number of investment opportunities within our borders.

Presently MP Materials (rare earths) and ALB (lithium) — along with broader baskets (ETFs) with exposure to the metals, and their miners, essential to this evolution of energy — are positions within our core portfolio…

“Economist Dave Rosenberg more or less echoed something else I mentioned in yesterday’s video.

From his morning note:

“The problem is that we have a lot of people playing the market who have no sense of history. They likely are in for a big surprise, but that awaits the fiscal cliff to take hold in the second half of the year.”

“…the players in today’s market, many who are moving prices, seem to be only focused on prices. That sends signals, gets people thinking things, status quo bias begins to take over, and people can make what are ultimately big mistakes as they make money while taking bad shots.

Now, I act as if I know that this is going to end badly, I don’t. I just am assessing risks and probabilities.””

“…at least when it comes to futures speculators (and they’re no slouches), we don’t (at the moment) have quite the euphoria risk the headline surveys might suggest… Although, it’s definitely elevated enough (plenty) to keep an eye on…”

“Clients and long-time readers would be 100% forgiven if they were to call me a skeptic, as they’d be mostly correct. In fact, per the following from Thomas Philippon’s The Great Reversal, I feel it’s my/our duty — as it has us forever digging through data, and even (especially) questioning/challenging our own theses:

So be skeptical— always. Most people simply repeat what they have heard without checking the data. In fact, there is often a negative correlation between outward certainty and factual information.””

“To add a bit to our narrative, here’s my comment to a presentation yesterday, where I referenced the work of another analysts who makes a compelling longer-term inflation case having to do with Asia’s evolution/development.

I’ll parenthesize where clarification is needed:

“Really don’t think the Fed “wants it (inflation) hot”. “Hot” would have them tightening.

The Fed talks up what they want, especially when it’s not there. They have been talking down inflation (or talking up “transitory inflation”) because if indeed it’s running hot, they’ll have to tighten — and in this setup they’ve backed themselves into — tapering is indeed tightening. I.e., tapering will have a serious knock-on tightening effect in markets.
Longer-term, analysts like V. Deluard make a compelling case for structural changes in Asia — moving from export driven (exporting deflation) models to consumption, which, along with what amounts to heightened pushback against globalization — leaving a real risk of structural/long-term global inflation going forward.
Not to mention, we’re looking at a fiscal impulse that — when coupled with a debt bubble that presents the greatest ycc (yield curve control) odds since the ’40s — could very well provoke longer-term inflation without the normal interest rate mechanism doing its job (in terms of cooling)”