I can make my main point this week by going heavy on visuals, light on verbs.

For starters, let’s scroll through some technical indicators we’ve been tracking for years.

In the above 4 screens I circled the previous setups over the past 30 years that looked most similar to today’s (far right). Note how each of those earlier setups occurred in the early stages of multi-year bull markets.
So, easily, we could simply leave it there, forget about hedging against anything major to the downside, and just back up the truck and load er up with stocks. In fact there’s no dearth of Wall Street pros who are presently recommending just that.
But of course Wall Street, being in the business of underwriting all manner of capital raising among corporate America, will do well if it can keep folks a buying!
And while we love extended bull markets as much as anybody, our job is not (never) to play cheerleader to stocks. Our job is to assess what’s really happening on, and underneath, the field and play the game according to what our assessment says about risk/reward.
Let’s now go to the next level on those circled areas and see if indeed the present setup is all that many on Wall Street might have us believe.
Valuations: How attractively priced were stocks back when the above setups looked most like today’s, versus today’s?
Price to Earnings Ratio:

Uh oh! Uh no… Stocks relative to earnings are not only not cheap like they were at those past points, they’re 1999-expensive.
Price to Sales Ratio:

Worse yet! From a price to sales standpoint stocks are nearly off-the-chart expensive.
The “Buffett Indicator” (total market cap to GDP): 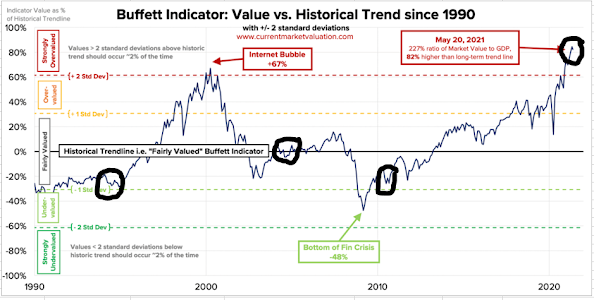 That’s all-time-high expensive for Warren Buffett’s favorite valuation metric. But note from the text leading into the chart:

“These are historical, all-time highs. However, with interest rates at historic lows, there is reason to suspect that “this time is different” may hold true.”

And I get that — that stocks can indeed trade at historically-high valuations when interest rates are at historic lows.

So let’s take a look at interest rates (2-year treasury note yield), with the circles:

Now that’s one where a Wall Street permabull could counter my concerns:
Rates (with stocks) rose immediately from that 2004 setup all the way to the 2007 peak. And while they dropped a bit further following the 2009 setup, they (along with stocks) ultimately settled into an extended up trend all the way through the end of 2018.
So, clearly, while rates arguably have very little downside potential from here, recent history says they can trend higher without killing this bull market!
Well, actually no, they really can’t. Not when, again, we consider valuations.
Per the source of that “Buffett Indicator” chart, it’s historically-low interest rates that make such crazy high valuations possible.
Hence one of the main elements of our current structural inflation thesis (from our May 13 post):

“The Fed’s fear of bursting present asset and debt bubbles were it to implement traditional inflation-fighting measures — thus willing to fall notably behind the inflation curve well into the foreseeable future. In fact, I personally place better than 50/50 odds that if indeed a long-term trend of rising inflation emerges, that the Fed will revert to yield curve control (buying up the price (down the yield) of longer-term treasuries) to control lending rates that, were they allowed to rise, would themselves produce a headwind to rising inflation.”

Bottom line: While, indeed, much of our technical analysis says stocks are okay here, we’re cognizant of the fact that valuations and the interest rate/inflation setup suggest otherwise.

And, make no mistake, $10 trillion dollars (so far) worth of global central bank printing (the lion’s share from the U.S.) explains this historic anomaly. Hence our present lean toward assets that do well in an extended weak-dollar environment.