Morning Note: Markets Own the Fed

The NFIB Small Business Survey was out this morning and, as I’ll bet you suspect, optimism’s up among the companies who employ more than half the U.S. working population. And, nearly more than ever, they’d love to be employing even more.

““Small business owners are seeing a growth in sales but are stunted by not having enough workers,” said NFIB Chief Economist Bill Dunkelberg. “Finding qualified employees remains the biggest challenge for small businesses and is slowing economic growth. Owners are raising compensation, offering bonuses and benefits to attract the right employees.””

That last sentence sounds inflationary to me, but what do I know?

Here are a few snippets from the report:

A net 3% of all owners (seasonally adjusted) reported higher nominal sales in the past three months, up nine points from March. The net percent of owners expecting higher real sales volumes improved one point to a net 1%.”

“The net percent of owners raising average selling prices increased 10 points to a net 36% (seasonally adjusted), the highest reading since April 1981 when it was 43%. The highest was 67% in October 1974 when inflation reached double digit rates. Price hikes were the most frequent in wholesale (62% higher, 3% lower) and retail (46% higher, 6% lower). Seasonally adjusted, a net 36% plan price hikes, the highest reading since July 2008.

A net 31% (seasonally adjusted) reported raising compensation. A net 20% plan to raise compensation in the next three months. Increased compensation is being passed on to customers through higher prices.

8 of the report’s 11 components improved, 2 declined, one remained unchanged: 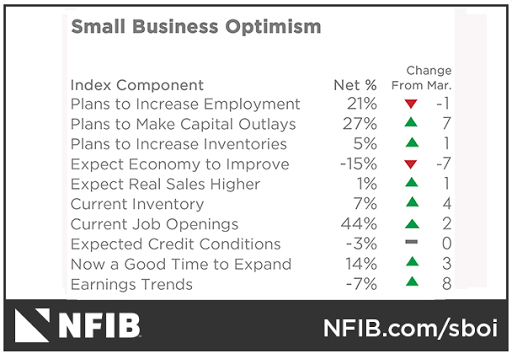 “The American economy is back to prerecession levels of gross domestic product and the unemployment rate has recovered 70% of the initial pandemic hit in only six months, four times as fast as in a typical recession.

Normally at this stage of a recovery, the Fed would be planning its first rate hike. This time the Fed is telling markets that the first hike will happen in 32 months, 2½ years later than normal. In addition, the Fed continues to buy $40 billion a month in mortgages even as housing is clearly running out of supply. And the central bank still isn’t even thinking about ending $120 billion a month of bond purchases.

Not only is the recovery happening at record speed, excesses of fiscal policy are already visible. Consumers are spending like never before, construction is booming, and labor shortages are ubiquitous, thanks to direct government transfers. Two-thirds of all relief checks were sent after the vaccines were proved effective and the recovery was accelerating. Opportunistic politicians didn’t let the pandemic go to waste.”

“Isn’t the Fed’s independence supposed to act as a counterbalance to these political whims?”

Yeah, well, “Fed independence” has to be the most oxymoronic statement in today’s financial world.

Bottom line: The markets utterly own the Fed. And while selloffs in equities indeed get their attention, it’s the credit markets that ultimately keep them up at night. Raise interest rates and just see what happens to a bond market that sports yields so low, on even the absolute junkiest of debt (CCC-rated corporate bonds carry a 5 handle currently), that it’s become virtually unrecognizable…

Have a great day!
Marty