“This makes no sense!” is a common refrain coming from our clients who’ve been around a few stock market blocks in their day.

And while it was indeed the experienced-man/woman’s mantra of the day in the late ’90s [Buffett didn’t touch tech back then], at least we could find signals of stress in other markets. Namely credit.

I mean, surely, when corporate balance sheets add a trillion dollars of debt in a single year — on top of record amounts they’re already servicing — well, have a look at our 75-year U.S. corporate debt chart, and it’s only through the end of last year

and when no-small amount of it is sitting on the lowest rung (BBB-rated) of the investment grade (higher quality) ladder,

I mean, again, surely (and we won’t even get into the macro risks we know about), one should receive a serious risk premium (higher yield) for investing in lower quality debt, right? Which would then provide a signal/warning of some potentially serious danger ahead…
Well, that would be history, however — given the devastation that bursting the present debt bubble would wreak — the Fed has abandoned all convention, and integrity to the Federal Reserve Act, and through outright intervention into where no Fed has gone before, essentially (per the next chart) destroyed the bond market’s signaling mechanism (at least for now).
Here (panel 2) is the high yield credit spread (difference in yield between 10-year junk bonds and 10-year treasuries — goes up when macro and, thus, credit risk is elevated). Panel 1 is the S&P 500 aggregate price to sales ratio:

Note the clear signal/warning of economic, and market, stress issued by the high yield credit spread heading into the stock market bubble bursting in early 2000, and (albeit arriving later in the game) the epic consumer debt/mortgage/real estate bubble of the mid ’00s. And — save for the Feb/Mar 2020 freakout — note the utterly nonsensical record low spread today, amid the greatest amount of debt on corporate balance sheets in history and stock market valuations at all-time record highs.

Again, the Fed (post the Feb/Mar freakout) has effectively destroyed the usefulness of the bond market as an effective, actionable market signal.

That said, macro thinker Danielle DiMartino Booth points out that the very junkiest of places in the bond market were caught totally off guard even back in the day: 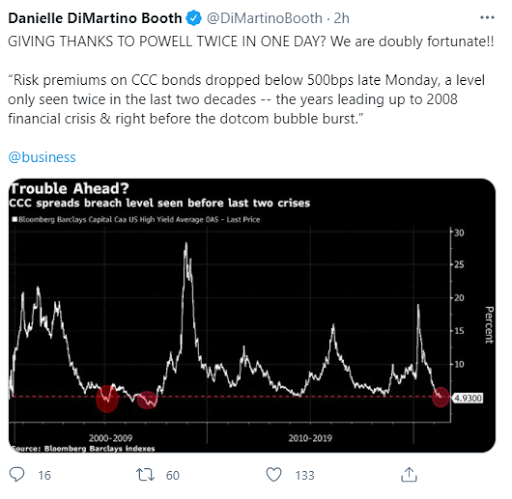 Now, there’ll come a time — could even be today, anytime after 11am pt (Fed’s rate decision and press conference) — when the bond market makes a move that would seem to contradict all I’ve written to this point.

Meaning, if indeed Fed chair Powell were to announce that they expect to be reducing, or ceasing, their monthly asset purchases, and/or, hiking rates a titch by, say, year-end to quell inflation risk, you’re going to see bonds take I suspect a major hit, right along with stocks… Which, at this juncture, means we should place low odds on anything more than a stuttering, uncomfortable, benign-as-he-can-make-it hint of such possibilities.

Although, as lopsided as markets are currently — crowded big time on the monetary-policy-party-forever side of the boat — even an intentionally-benign-sounding hint could send markets into a bit of a tizzy…

I’ll finish with a few highlights of our recent messaging:

“Now, never to purposely rain on anyone’s parade, I feel it my duty herein to point out that the earnings expectations for this year are essentially where they were for 2020 (h/t Dave Rosenberg) — and that stocks are up some 30% since…

Dang! There’s a lot priced into stocks right here. And, like I mentioned in Saturdays video, the current state of high valuations, high debt and record low interest rates — among other things (maybe higher taxes and a turning down the stimulus spigot a bit) — does not the typical beginning of a strong bull market make.”

“Well, not that this necessarily supports our structural (longer-term) rising inflation thesis. But, then again, wages are sticky (i.e., not easy to reduce once they’re set).

Restaurants Serve Up Signing Bonuses, Higher Pay to Win Back Workers: With job openings above pre-pandemic levels, eateries from McDonald’s to Wolfgang Puck’s Spago are battling for new hires

“Some restaurant owners have said they are having to pass along some of the wage increases to customers in the form of higher prices, as other costs rise at the same time. Consumer prices for fast food in March grew 6.5% compared with last year, the biggest year-over-year increase since at least 1998, Labor Department data show.””

“Analyses should be performed with abject objectivity. For, when we like something, we humans tend to be drawn to evidence that supports it — and/or we tend to interpret evidence that conflicts with our liking in… well… a manner to our liking.

In the words of Sherlock Holmes:

“Inevitably, one begins to twist facts to suit theories instead of theories to suit facts.”

“The problem is that our ideas are sticky: once we produce a theory, we are not likely to change our minds—so those who delay developing their theories are better off.

When you develop your opinions on the basis of weak evidence, you will have difficulty interpreting subsequent information that contradicts these opinions, even if this new information is obviously more accurate.

Two mechanisms are at play here: the confirmation bias that we saw in Chapter 5, and belief perseverance, the tendency not to reverse opinions you already have.

Remember that we treat ideas like possessions, and it will be hard for us to part with them.”

“I keep seeing these one-off data points, and these deep creative explanations that do nothing more than satisfy certain folks’ biases, and data mining activities, and make the author look smart… It risks distracting folks away from on-the-ground reality…”

The bears and the naysayers always sound smarter than the Pollyannas… Better to be neither… Better to be humble, and simply be what conditions dictate…””

“Words to heed, indeed, by John Kenneth Galbraith. Although, per the third paragraph, alas, they all-too-often aren’t:

“Regulation and more orthodox economic knowledge are not what protect the individual and the financial institution when euphoria returns, leading on as it does to wonder at the increase in values and wealth, to the rush to participate that drives up prices, and to the eventual crash and its sullen and painful aftermath.

There is protection only in a clear perception of the characteristics common to these flights into what must conservatively be described as mass insanity. Only then is the investor warned and saved.

There are, however, few matters on which such a warning is less welcomed. In the short run, it will be said to be an attack, motivated by either deficient understanding or uncontrolled envy, on the wonderful process of enrichment. More durably, it will be thought to demonstrate a lack of faith in the inherent wisdom of the market itself.””

And if you happened to have missed last week’s macro update, it’s worth watching — particularly for my take on inflation risk: