Our proprietary macro index gave back a smidge this week, dropping 2.04 points to 14.29: 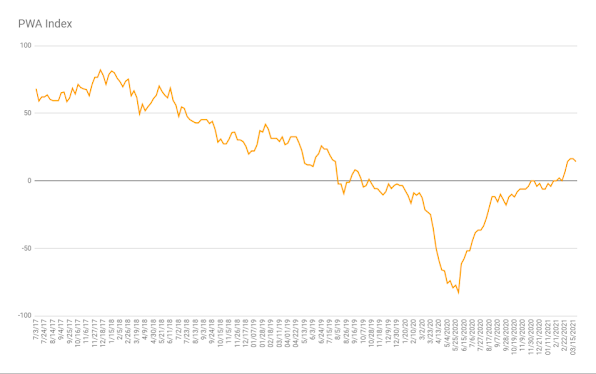 Three of our inputs improved, three declined. The relative magnitude of the individual score changes explains the slight pullback in our overall score.

Those showing improvement were,

Factory Capacity Utilization (the % of full capacity in which factories are operating):

There were a number of other inputs that gave meaningful readings that were either already at the high-end, or the low-end, of our scoring system, or didn’t move to the extent that warranted a score change (but got my attention nevertheless) — some of the housing data, in particular. Although, as I’ve noted the past couple of days, severe February weather in places like Texas no doubt influenced these results.
Much of the forthcoming data will be unusually distorted, to say the least, as they’ll be scored against year ago comparables that occurred during the massive COVID-inspired contraction. I’ll of course take that into account as I report to you on the state of general conditions over the weeks/months to come.
Have a great weekend!
Marty
P.S. Your inbox will (well, should, as I’ll be away from the office) get a reprieve from my relentless messages until next Wednesday 😎
Share:
Share on linkedin
Share on facebook
Share on twitter
Share on email
Share on pinterest