Sitting here, sifting through the plethora of data, etc. I’ve accumulated over the past week for the purpose of penning this particular message, I find myself needing to reiterate that (as long-time clients and readers know) I’m anything but a gloomy Gus by nature. It’s all about how the pieces (from economic data, to Fed policy [and practice], to valuation, to the fundamental and technical setups across major asset classes, to sentiment, and so on) all presently fit together.

And while I’m absolutely not predicting that the equity market’s about to rollover, I can tell you with certainty that whenever (yes, that’s a “when”)  the next big correction or bear market occurs, the setup as the market reaches its ultimate peak will look a lot like it does presently.

So, then, I’m talking risk, not timing!

John Hussman, who, in yours truly’s opinion is — in terms of the depth of his research, the thoughtfulness/objectivity in his approach and the quality of his commentaries — rare among today’s investment managers, shares our view.

Read this snippet (where he quotes his younger self) from his latest monthly letter. Then note the date at the bottom:

“On Wall Street, urgent stupidity has one terminal symptom, and it is the belief that money is free. Investors have turned the market into a carnival, where everybody “knows” that the new rides are the good rides, and the old rides just don’t work. Where the carnival barkers seem to hand out free money just for showing up.

Unfortunately, this business is not that kind – it has always been true that in every pyramid, in every easy-money sure-thing, the first ones to get out are the only ones to get out. We’ve seen two-tiered markets before: most prominently in 1929, 1968-69, and 1972. Even at those pre-crash extremes, the S&P never sold above 20 times record earnings. The market clearly faces problems at a multiple of 32.

Technology stocks will ultimately fare worse. Over the past 5 years, the revenues of S&P 500 technology companies have grown at a compound annual rate of 12%, while the corresponding stock prices have soared by 56% annually. Over time, price/revenue ratios come back in line. Currently, that would require an 83% plunge in tech stocks (recall the 1969-70 tech massacre). The plunge may be muted to about 65% given several years of revenue growth. If you understand values and market history, you know we’re not joking.”

Here’s the chart of the S&P 500 Tech Index from the date of the above quote to the same date 3 years later:

“Over the past 5 years, the revenues of S&P 500 technology companies have grown at a compound annual rate of 12%, while the corresponding stock prices have soared by 56% annually.”

Here’s from our note yesterday morning:

“…compared to what was expected, say, exactly two years ago, if today’s projections come to pass, corporate earnings will miss 2 year-old expectations by 5%. And, as you’ve noticed, the market ain’t down 5% over the past two years.

I.e., while the fundamentals are certainly improving relative to last spring, stock prices, as they’ve accelerated, are leaving them further and further behind… In other words, it’s been virtually all “multiple (as in price-to-earnings multiple) expansion” (read stocks are expensive [to put it mildly!]).”

“Nothing so animates a speculative herd as a parabolic price advance in an asset detached from any standard of value. I am convinced that future generations will use the present moment to define the concept of a reckless speculative extreme, in the same way our generation uses “1929” and “2000.””

So what indeed explains how today’s stock market has left the fundamentals behind to a degree of such rare historical precedence?

Now wait a minute! An economist (or a Wall Street bull) might argue… what about the fact that 2020 was the best year in the past 20 for personal incomes (up 5.1%)? Isn’t that fundamental? Isn’t the U.S. economy consumption-driven? Don’t rising incomes lead to higher consumption?

Well, sure, put that way, it makes total sense that stocks are at record highs…. right? Well, honestly, no. Despite the remarkable, and grossly unintuitive, rise in personal incomes — the economy actually shrank 3.5% in 2020.

Okay then, something’s definitely amiss! I mean, as economist Dave Rosenberg puts it, “the worst downturn since 1946 coincided with the best year for personal incomes in the past 20.” How on Earth can that be?

Well, frankly, it’s all about Uncle Sam transferring [borrowed] money directly to the people (btw, the economic shrinkage would’ve been over 9% without it!).

“Commerce Department data show total employee compensation in the second and third quarters of 2020 was down by $215 billion compared with the first quarter. Yet government personal transfers were up $893 billion—four times the compensation lost. In the second quarter alone, real per capita disposable income was up 10.5% compared with the first quarter—25 times as fast as the average quarterly income growth in the prior two years.

This surge in personal income was driven by government stimulus equal to $2.6 trillion, more than all the private wages and salaries paid in the first quarter of 2020. While preliminary fourth-quarter figures show that personal income declined from the previous quarter, real per capita disposable income in 2020 grew 5.5%—the highest growth rate since 1984, the peak of the Reagan recovery. All of this occurred before the $900 billion December stimulus took effect.

So what happened to all that money? As transfer payments surged in the second quarter and the shutdown curtailed personal-consumption expenditures, pent-up purchasing power spiked.”

That is truly remarkable!

Then, as the late-cycle excesses of the previous expansion are purged and leaner institutions emerge, folks regain employment, begin taking advantage of cheaper goods, and a fresh new period of healthy growth ensues.

Well, alas, “lean” is not remotely how you’d describe your typical institution of early 2021, in fact “fat” would be the apt characterization.

Yes, you can see the dip as the recession got underway, but then the Fed stepped in and facilitated a historic bailout of institutions, failed and otherwise — many of which were failing before I could spell coronavirus! A bailout of course that amounted to a piling of debt on top of debt.

So what did this massive bailout of, in reality, the hedge funds and private equity firms whose portfolios were awash with the most suspect corporate debt accomplish?

I.e., liquidity injections can facilitate extended debt servicing, but they in no way remedy the fact that without said facilitation an insolvent institution has not the cash flow to make its debt payments. Which presently explains the state of some $1.4 trillion of U.S. corporate debt. I kid you not!

So, without question, we live in unusual times. The powers-that-be, so justifiably afraid of what would happen should they let economic nature finally take its course, are not remotely interested in, in essence, allowing markets to clear. Instead they’re willing to facilitate what can only be explained as a further exacerbation of a debt setup the likes of which have only been seen twice before over the past century; the early 1930s and the lead-in to the 2008 “disaster” (the two bottom red circles below).

Here’s from the conclusion to our 2020 year-end letter: 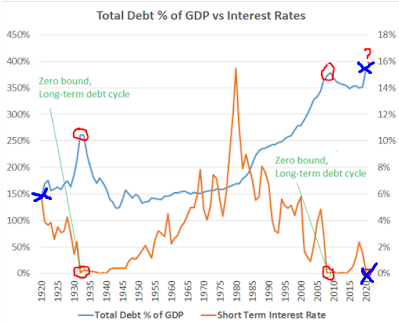 “This time I added blue X’s where debt to GDP and interest rates sat heading into the Roaring 20s and where they sit today.

Today looks much more like the end of a debt cycle than it does the beginning of one, which is anything but a bullish endorsement for stocks.

I.e., sustainable bull markets tend to emerge from economic setups consisting of higher interest rates (that can come down), and low debt levels that allow room for the private sector to borrow, spend and invest. The exact opposite of the current setup!”

Speaking of sustainable bull markets, we’ll finish up with just two of a multitude of market internals that, when taken in historical context… well, let’s just say that they question the sustainability of what’s presently unfolding:
The % of individual stocks that actually outperformed the S&P 500 over the past 12 months (speaks to the stinky breadth I’ve been writing about lately): 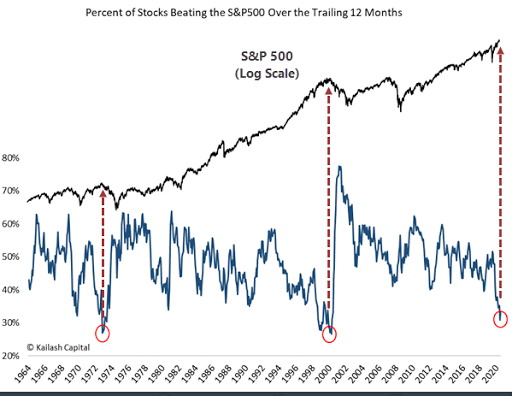 Yes, we’re approaching historical (negative) extremes.
Speaking of extremes, take a look at the acceleration in margin debt (folks borrowing against their equity portfolios to, in most cases, buy more stocks): 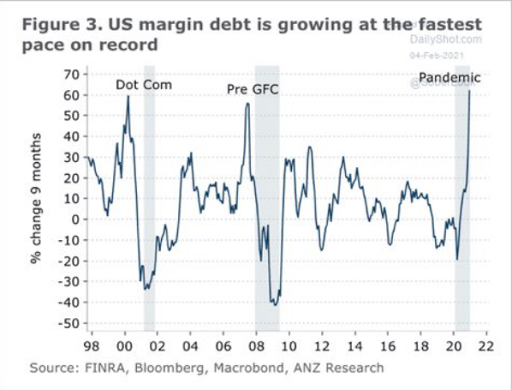 Yikes! Note the dates of those two prior peaks…

If you need more convincing that we’re presently skating on historically thin ice, be sure and read Hussman’s February note, or at least scroll through his many charts.

I’ll close with this from former Fed Chair/current Treasury Secretary Janet Yellen this morning. Consider the implication of these words:

“We really need to make sure that our financial markets are functioning properly…and that investors are protected.”

Protected from what? The consequences of their own rampant speculation?

Folks, that simple sentence so explains the fix we’re in. Were markets left to their own functions, to, thus, “function properly”, hedge fund and private equity investors, for example, would be suffering mightily from leveraging the constant Federal Reserve largesse (money printing and record low interest rates) into what amounts to a smoldering corporate debt volcano. As would anyone with the temerity to invest their savings into companies with outdated business models and disastrous balance sheets, And, for that matter, those who’d aggressively (in un-hedged fashion) buy into an equity market that exhibits virtually all of the characteristics of bubble tops past.

I, alas, suspect that they — the latter two in particular — will (suffer mightily), before it’s all said and done…