This Week’s Message: Exploring the Pent-Up Demand Narrative, and What It Portends for Markets

Imagine, after being locked down now for nearly a year, the historic economic bounce we’re going to see once — when things really open up — all of that pent-up consumer demand is unleashed!

Throw in a few trillion of fiscal, and monetary, support, and, my goodness, stocks have got to absolutely soar!

That, my friends, is the narrative from Wall Street these days, and, make no mistake, it’s not the least bit lost on the minds of everyday investors/traders.

But is it as rock-solid a thesis as it’s being portrayed?

1. By definition, the notion that there presently exists historic pent-up demand suggests that folks haven’t actually been spending, and, again, once the coast is clear, they indeed will in monster fashion.

Well, think about that as you read this from yesterday’s Wall Street Journal:

“Without restaurants to visit and trips to take, Americans bought out stocks of cars, appliances, furniture and power tools. Manufacturers have been trying to catch up ever since.

Nearly a year since initial coronavirus lockdowns in the U.S., barbells, kitchen mixers, mattresses and webcams are still hard to find. A global shortage of semiconductors has forced many car makers to cut production in recent weeks.”

“Malibu’s orders were up by more than half last June from a year earlier and sales of recreational boats in the U.S. in 2020 were the highest in 13 years, according to the National Marine Manufacturers Association, a trade group.

Consumer spending on long-lasting goods in the U.S. rose 6.4% last year but domestic production of those goods fell 8.4%, according to federal data, leading to shortages and higher prices.”

“Pent-up” demand? Hmm…. sounds like demand was, to put it mildly, alive and well during the lockdown — so much so that producers had a devil of a time keeping pace.

I wonder if investors/traders shouldn’t be discounting the odds of a not-small letdown in spending when things open up, and/or when the “free” money from government stops flowing…

Of course the above refers to spending on stuff, not on services, not on dinners out (although, keep in mind, folks spent tons on equipping their kitchens last year), not on vacations, etc.. Surely, there’s some serious pent-up demand in the services, the leisure, and the hospitality spaces to be expressed. Right? Yes, right!

But of course that assumes that folks, indeed, will throw all caution, and their discretionary monies, to the wind and go have a ball. As opposed to maybe laying low a bit, given what they just experienced.

The latest consumer surveys say the latter is a legitimate consideration.

Here’s the chart of the latest overall scores for the three consumer sentiment surveys we track for our macro index:

But, again, shaky sentiment notwithstanding, we should nevertheless expect quite the pickup in the consumer discretionary sector. And of course the related stocks should see quite the rally as well, right?
Well, you’d sure think so, and I wouldn’t be at all surprised — but of course we should consider how much of that anticipated rebound may already be priced into those stocks.
Here’s a 1-year graph of the equity ETF that tracks the sector:

Oof! Imagine how that chart might look 6 months from now if indeed those sentiment surveys happen to be signaling something…

And 2: Let’s say Wall Street indeed has it right, and, despite record spending on stuff this past year, and notwithstanding the less than euphoric sentiment showing up in the consumer surveys, folks will just keep right on spending. I mean if one Harley’s good, two’s got to be better — hey, they come in different colors. Or, let’s just assume that the surge in services will more than offset the potential letdown in stuffs.

Well, again, that’s what Wall Street’s baking in, and, yes, it’s definitely showing up in bonds.

Here’s a 1-month graph of the 10-year treasury yield: 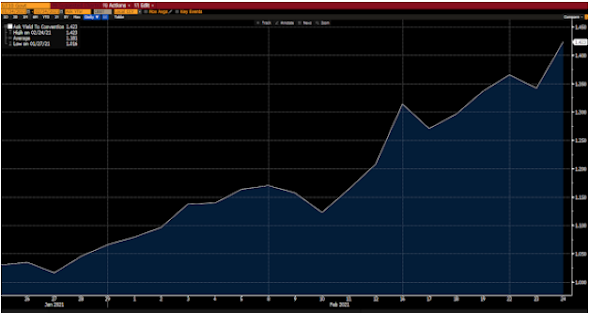 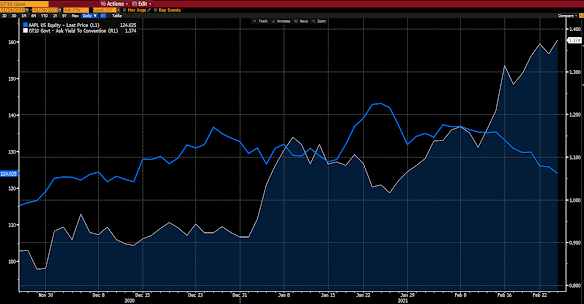 So why would rising interest rates be hell on stocks? Well, we went there fairly deep in last week’s message, so, for this epistle, I’ll simply defer to one of today’s truly gifted macro thinkers, Artemis Capital’s Christopher Cole:

“A normalization of rates to pre-2008 levels would cause US Corporate Profits to collapse by 50% due to increased interest payments alone.

A move in rates back to 1970s peaks would result in the total elimination of all US corporate profits.”

We’ve a ways to go to get to the pre-2008 level. As for the 1970s peaks, well, I’ll go on the record as saying that just ain’t happening. Nevertheless, given the incredible amount of debt presently in the system, and the huge leverage underneath equities, make no mistake, the markets will crack long before rates rise to even 2007 levels.

So, while inflation may rise to a point that in earlier days would’ve pushed bond yields to 15-year ago levels, the devastation that it’d deliver today would, as I suggest in the last paragraph below, have the Fed buying up everything that moves in the bond market, while buying down interest rates in the process.
Therefore, sure, invest away, but, before you do, read our latest take on 2021’s prospects. And be smart; own stuff that does well when the dollar doesn’t, when real rates (nominal yields minus inflation) are low, and that’ll be positioned to take advantage of where government money’s going to flow. Expect huge volatility going forward, and, please, hedge your bets. (Clients, of course all that’s our job on your behalf…)
Stocks, in the aggregate, while they may indeed continue to hold up going forward, are, from many most angles, in a precarious place right here.
I’ll close with the following from an email conversation yesterday with a good friend who asked for my thoughts on the recent rise in mortgage rates:

“I guess the question is why are bonds selling off?

That would be a combination of what we’re seeing in commodities markets, in the purchasing manager surveys (input costs rising across the board) and optimism over the economy once herd immunity sets in.

J. Powell is desperately talking down inflation before congress this morning, without mentioning (at least early on) what we’re seeing in commodities and bond markets lately.

The economist’ community is pretty divided on this one. Conventional wisdom says there remains huge slack in labor markets and a monster output gap (difference between potential long-run GDP and what we’re getting), so inflation isn’t going anywhere. But in the real world (outside of the convenient CPI and PCE [personal consumption expenditures] calculations), stuff’s rising in price, a bunch.

Now, we can absolutely blame a whole host of supply/capacity issues for what we’re seeing here, but we have to also acknowledge the fact that there’s $5 trillion of fiscal spending on its way ($2 trill COVID relief, $3 trillion infrastructure thereafter)….

However, keep in mind that “we” simply can’t have rates trending notably higher given the record public and private sector (corps hugely) debt, and the huge leverage in equities… If this keeps up, I’m 100% convinced we’ll see the Fed step in big and suppress the yield curve… We’ll see how far they allow it to run in the meantime…”