The headline that crossed my phone at the market open:

Here’s from this week’s main message (an important read posted later last evening, in case you missed it):

“Now, rising rates, if they persists, are indeed a major problem for the bullish equity investor/trader. I.e., as we’ve been reporting, pent-up demand notwithstanding, higher borrowing costs — especially under present conditions — is ultimately hell on stocks, particularly tech stocks.”

Make no mistake, the Federal Reserve’s board members are not stupid… While they may appear uber-reckless to those of us who forever study economics (and history) — in reality, and make no mistake, they’re not even that, they’re simply, and utterly, panicked!

Last year when they announced that they were going to allow inflation to run “hotter” — allowing it to “average” above their 2% threshold over time before tightening policy — the street laughed out loud. Wall Street’s mantra was that the Fed, unable for years to create any inflation (apparently deemed too low), is now trying to convince us that they’re about to succeed at their task — even trying to talk up inflation expectations, in desperation.
Our take was very different: We actually believed that, rather than being confident (or pretending to be confident) that their efforts at last would create a healthy bit of inflation, they were actually scared to death that it — amid constant Fed easing and unbridled government spending — would indeed rear its head, its ugly one, that is.
You see, the Fed can’t tighten! They themselves have blown up a historic debt bubble and promoted so much leveraging of the stock market that, should they tighten policy, they fear (legitimately so) that the financial markets will crumble, and take the economy right along with them.
Here’s from our Sept 30, 2020 message:

“…the Fed’s new approach to potential inflation — let it run hotter — is, contrary to popular opinion, not about their desire to inspire inflation via “forward guidance”, but to give themselves the wherewithal to not address it with higher interest rates if/when it ultimately exceeds the point where their old commitment would’ve had them doing so.

I.e., imagine the Fed hiking rates amid history’s greatest debt bubble when their decades-long practice of bailing out otherwise failed institutions, not to mention rescuing egregiously careless hedge funds and private equity firms (this go round), coupled with financial repression, leaves them with virtually no choice but to in fact inflate the debt away via the printing press.”

Well, there’s at least one central banker out there who (per Peter Boockvar this morning) — while not willing to take preemptive action, mind you (too late) — is willing to at least hint at what is so painfully obvious to yours truly:    emphasis mine…

“The Bank of Korea overnight also said they are ready to fight the market if they feel it’s needed. BoK Governor Lee said “Now isn’t the time to discuss full normalization like a rate hike, because uncertainty surrounding the trajectory of the economy is very high.” There is one thing though that Lee acknowledged, “Higher yields may put pressure on stocks and property.”” 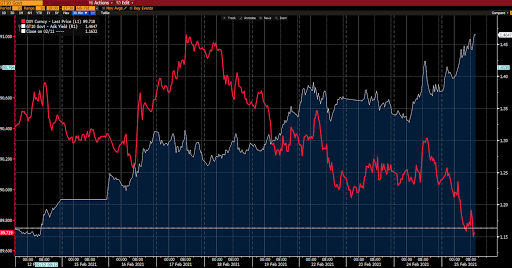 Oil services, staples and utilities are our only positions in the green so far this morning, while miners, gold, tech, materials and Verizon are leading the laggards lower. All in, our core mix is off 0.38% as I type.
While I won’t name names, there’s a reason why I’m pulling this morning’s quote from Leon Levy’s must-read The Mind of Wall Street:

“Regulatory and accounting laxness is easily ignored when stock prices are climbing, but as companies cut corners and hide expenses (to keep prices rising so that executives can exercise options and get their bonuses), they set up a day of reckoning.”