Stocks, for the moment, are liking the spending side of what the new administration would like to accomplish. At some point, however, they’re going to have to process the taxing side.

Although Netflix’s earnings report after-hours yesterday may have actually been more than just the icing on today’s rally’s cake.

Note: Per this morning’s note, while the Nasdaq Comp Index saw the bulk of today’s gains, just shy of half of its members actually closed down on the session. And up volume on the New York Stock Exchange barely edged out down volume 51% to 49%. So, no, not nearly your across the board rally. But of course we’ll take it.

The ultra-pleasing aspect of Ms. Yellen’s presentation to Congress had everything to do with her plea to “act big” on government borrowing since interest rates are so incredibly low.

Well, okay, let’s give the market exactly what it wants (I likened it yesterday to an addict needing a short-term fix), as, in its current state, it won’t give the slightest thought to the fact that government debt doesn’t get paid down, it gets rolled — and of course, as $23 trillion* of debt rolls over time, well, Lord help us if those rollings occur when interest rates are high.

Here’s from Part Three of our 2020 year-end letter:

“Successfully averting depression notwithstanding, Japan’s policymakers — having no stomach for the pain that would result from failed enterprises meeting their market fates — have left their economy constrained by “zombie” companies.

Short and sweet, from a 2017 Bloomberg article on productivity issues in Japan’s manufacturing space:

Unprofitable businesses that require constant capital infusions to stay afloat (zombies) are drags on an economy, as they consume resources that could’ve otherwise been used in productive endeavors.

You’ll recall how Japan was once the word’s innovation leader, well, Bloomberg’s Innovation Index now has them in 12th place.

With regard to the scary prospects of rolling debt during a higher interest rate regime, of course there’s a solution — have the Fed print whatever dollars are needed to buy the new debt and keep rates low in the process. Make no mistake folks, that’s precisely where we’re headed.

Now, as dire as that all sounds to those of you who don’t trade a Robin Hood account, while it’s a fine fix that years of intervention has gotten us into, there are opportunities to be had if one understands what the interveners have to do if they’re to keep this financial market bubble afloat.

Now, before we get to those opportunities, and speaking of folks who trade on Robin Hood, there are those (lots and lots of those) out there — although I suspect not many, if any, of our readers — who would send some serious hate mail to this old, outdated, ignorant, don’t-know-tech boomer (and those would be the nicer digs) for my mere suggestion that stocks these days are in a bubble.

Note: Such defensiveness among the perennial bulls and all the newbies trading on Robin Hood, by the way, is a clear sign of a bubble.

But of course this particular boomer would never make such an assertion without something to back it up.

For starters, we do our own “Fear/Greed Barometer” to gauge market sentiment — since bubbly conditions tend to come with unusually high optimism, and we have other peoples fortunes under our care.

Were it not for cautious options dealers (VIX) and futures speculators in the S&P 500, we’d be at max optimism. But, believe me, -60 is plenty bubbly: 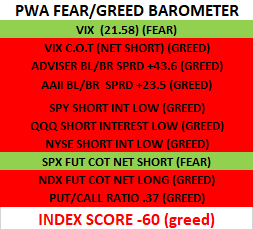 As for measures not captured by our index; take a look at the amount of daily volume occupied by small call options (betting on more upside) buyers. 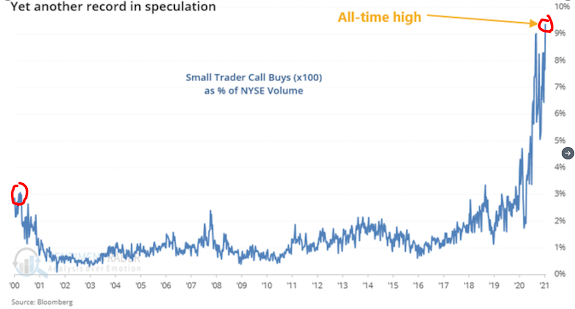 Yes, that’s quite the new record — the old was right at the top of the tech bubble!
Speaking of the tech bubble, how about Goldman’s index that tracks the stock performance of tech companies that literally make no money: 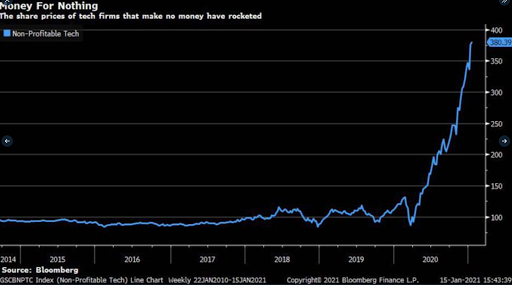 You fellow boomers out there should definitely be recalling that dotcom bubble right about now.
And this — from economist Peter Boockvar’s morning note yesterday — is perhaps the proverbial icing on the bubble cake”

Here is an update of the Citi Panic/Euphoria index where it literally is going off the chart. It was 1.83 last week and 1.28 in the week prior. This is an unprecedented level of enthusiasm in the history of this index but it will only matter when it matters. 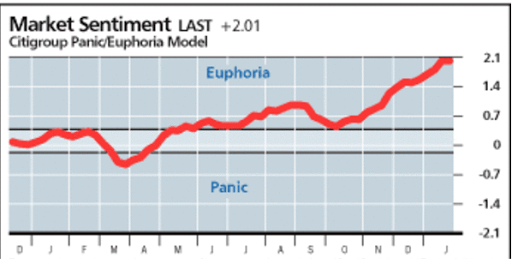 Like Peter said, “it will only matter when it matters.”  Yes, he’s assuming it’s a “when.” But, then again, he’s just a boomer like me.

I just can’t include the word “euphoria” with regard to stocks without quoting the great Sir John Templeton:

“Bull markets are born on pessimism, grow on skepticism, mature on optimism and die on euphoria.”

If, by the way, you need more convincing, and if you’re into charts, Part Four of our year-end letter features 10 that also scream bubble.

So, let’s end on a legitimately optimistic note.

Like I said above, there are opportunities in the cards of this historic hand we’ve been dealt. In fact, I touched on them last week when I outlined the latest tweaking of our core mix.

“In a nutshell, we’re continuing to express our longer-term thesis — which reflects what absolutely has to occur for the powers-that-be to circumvent what they are presently deathly, and legitimately, afraid of — a collapse of the debt-heavy edifice they themselves have built underneath the global economy.

Specifically, for the U.S., that’s a weak dollar and low interest rates virtually as far as the eye can see. It’s also a massive amount of fiscal spending on infrastructure, which includes a serious push toward related eco-friendly endeavors.

I devoted volumes to this throughout our 8-part 2020 year-end letter. Each part can be found by scrolling through January 2021 and December 2020 in the righthand margin…

Specifically, in terms of how that looks for our client portfolios:

Our commodities target goes from 23% to 24% of the overall mix, with the addition going to silver.

Our emerging markets exposure goes from 9% to 10%, with the addition going to India.

Our U.S. equities exposure goes from 33% to 29%. With cuts to (while still maintaining positions in) consumer staples, healthcare and utilities.

The remaining 18% stays in cash and ultra-short-term investment grade corporate bonds. This cushions volatility a bit and maintains some “dry powder” in the event an equity market selloff presents some opportunities to exploit.

Sectors we’re adding to are financials, energy, and materials (miners in particular).

New subsectors within the areas we’re adding to are (at the margin) solar, wind, metals miners, a rare earth minerals miner, and water.

And, yes, we will continue to hedge with options. An absolute must given the present macro setup!

Now, keep in mind, your portfolio has to be of sufficient size to express our entire allocation. Kids/grandkids’ portfolios, for example, express our overall thesis in somewhat modified fashion.”