Nudged higher by purchasing manager surveys and the trend in outperformance of stocks over bonds, yet hindered by rail traffic, our proprietary macro index is yet again looking to peek above the zero line. 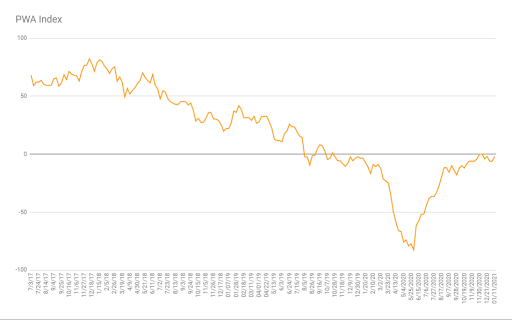 While our latest readings have been the farthest cries from the -83 depths of last June, still only 33% of our inputs actually score positive. 35% still read red, while the remaining 32% score neutral.
If our macro score was ever in need of context, it’s now.
I.e., it’s abundantly clear that were it not for the latest round of fiscal “stimulus”, $900 billion worth, the beginning of 2021 was destined to yield the dreaded double-dip recession. As, save for sentiment, and stocks, some very key data were already rolling back over.
The November jobs number, for example, came in at +245k, while +460k was the consensus estimate. The December number, posted this morning, actually showed job losses to the tune of 140k, versus a consensus estimate of +50k. That said, things weren’t as bad as those numbers suggest; the previous 2 months were actually revised higher by a total of 135k. But, still, not remotely confidence-inspiring jobs results considering the millions of folks still receiving some form of unemployment assistance…
Personal income was down three of the past four months, at a whopping 10.3% annual rate. That’s a 1930’s number, but of course it reflects the come-down off of the first chunk of stimulus.
Bottom line: As it stands, at best, that $900 billion will merely save the economy from contracting for only the first quarter of this year. Much more’s needed — if the aim is to artificially circumvent the business cycle — which is definitely on its way if the president-elect is to keep his promise. The $900 billion in his words was “just a down payment.”
So, what, as investors, do we do with that?
What are we to think about the fact that the major U.S. equity averages are at all time highs, and, despite all the government largesse, merely a third of the PWA Index’s 49 key economic inputs are actually looking up?
Well, we’re to think that the stock market thinks that once vaccines do the trick, things will go right back to where they were pre-COVID. And all it needs is a few trillion of government stimulus to tide it over till then…
But wait a sec! The major averages have ascended to new never-before-seen heights, which has to mean that the market thinks things are going to be better than they were pre-COVID. Better than they’ve ever been, in fact!
Well, that’s what we call “priced for perfection.” And, by the way, when you hear on CNBC that Wall Street sees 20% earnings growth for the S&P 500’s members this year, know that even that uber-bullish outlook would equate to earnings growth 13% below the 2021 consensus estimate this time last year.
Again, stocks are pricing in a better-than-ever scenario — amid weaker than pre-covid earnings expectations and, not to mention, a further expansion of the greatest corporate debt bubble in the history of mankind.
Now, while I can point to those insufficient earnings growth prospects, record high valuations, record high sentiment, record debt, etc., till I’m blue in the face, I can’t lose sight of the fact that stocks aren’t priced these days on anything remotely fundamental. They’re priced on the prospects that stimulus packages will come one after the other until, well, until the powers that be are willing to see stocks tank the moment they announce that the tap is drying up.
Well, as it turns out, those “powers that be” are deathly afraid of folks even pondering the notion that the tap might someday be allowed to run dry.
Fed chair J. Powell made it very clear during his last public appearance that there will be no repeat of the 2013 Ben Bernanke “taper tantrum”; when the market tanked on the then Fed chair’s suggestion that they might turn down the spigot.
My! The corner they’ve backed themselves into!
And, my oh my! What they’ve done to market sentiment, and, ultimately, to the folks who’ve either never lived through a true market bubble, or have and think this time’s different.
Sorry, I strayed off into the stock market when this particular message is supposed to be about the economy.
And, yeah, I know what you’re thinking, the stock market is not the economy!
Well, okay, now go tell the Fed that…
In closing (FYI to clients), and speaking of markets, now that we have certainty in terms of the U.S. political regime going forward, we’re as I type putting the finishing touches on our next core portfolio rotation.
In a nutshell, we’ll continue to carefully exploit what we see as the more obvious opportunities given, among other things (such as global demographics), the longer-term implications for the dollar, for global infrastructure spending (eco-friendly and otherwise), for inflation, and for interest rates in today’s macro setup.
Have a great weekend!
Marty
Share:
Share on linkedin
Share on facebook
Share on twitter
Share on email
Share on pinterest