Macro Update: Back to Zero — And — What Would Seem So Obvious

December truck tonnage (Christmas online shopping) — our only needle-mover this week — jumped from negative to positive (2 points) in our scoring, bringing our macro index back to zero. 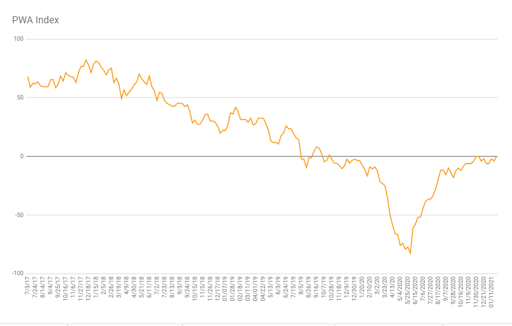 While zero’s better than a minus, judging by the present level of equity markets, you’d think we’d be at +50.

Well, okay, the stock market anticipates…. so we’ll say it must be anticipating a far far better than zero reading to come… Well, that, or perhaps a few more trillion worth of stimulus…

Here are a few inputs that didn’t change score, but are worth a look nevertheless:

Yes, the head-scratching reality of such robust housing data against such angst among consumers is, well, head-scratching…
And, yes, it (along with asset prices virtually across the board) indeed speaks to the massive contradiction coming from the mouths of Fed officials who say they’re intently focused on battling the rapidly rising inequality in our system.
Eh hem.… They — and their predecessors — unequivocally deserve the lion’s share of the blame!

I’ll finish this week with my scribbles from last evening after reading The Financial Times:

It virtually goes without saying that what the powers-that-be are hoping for is that, eventually, through massive printing, borrowing and spending, they can juice the real economy up to a level of production that justifies the record loftiness in asset prices that their — in all-time record fashion — massive printing, borrowing and spending has created.

Well, an understanding of what would seem so obvious were one to attempt to understand it — i.e., that growth via debt (the proceeds of which allocated by politicians) is forever weak, and that some percentage of that forever-weak growth will be needed to service the debt utilized to produce it — would make one justifiably skeptical (if not cynical) about the powers-that-be’s ability to pull it off.

Here’s from the article Dear Joe Biden, deficits do matter:   emphasis mine…

Note: BTW Let’s not be too quick to condemn only the left on this one… In 2020, before I could spell coronavirus, the Federal government created a budget deficit just a hair shy of a trillion bucks.

“…recent studies show that easy government money has ended up supporting the least productive companies, including heavily indebted “zombies” that would otherwise fail. The support also favours monopolies that have expanded not because of their innovation but by lobbying governments for favours and sidelining smaller rivals. The OECD warned, in a 2017 study linking falling productivity to easy money, that these trends will make it harder for societies to deliver “on their promises to current and future generations”.”

“…since 1947, US government spending above 22 per cent of GDP is correlated with periods of slower economic growth. It warned that this share has risen above 34 percent during the pandemic. My team also found a statistically significant link between periods of rising government debt and slow GDP growth. These studies cannot show causation, but the consistent link between growing deficits and weakening growth is unlikely to be coincidence.”

“The average person understands that there is no free lunch. The path to prosperity cannot be so easy as to just print and spend. If he relies on low rates to fund further massive government spending increases, Mr Biden will double down on policies that have magnified the problems he aims to fix: weak growth, financial instability and rising inequality. Decades of constant stimulus have left capitalism weaker, less dynamic and less fair, fueling angry populism. Deficits matter for the damage they are already inflicting.”

And this from The Economist:

“NEVER IN RECENT memory has so much uncertainty hung over global growth. That is not just because the prospects for the world economy in 2021 depend on how much the virus spreads and the roll-out of a vaccine. It is also because it is unknown just how much lasting damage the pandemic has done as it has slowed economic activity, shut down some firms and left workers jobless.

Its full impact has been obscured by massive emergency government intervention to bail out companies and support workers. Only when that support is withdrawn will the veil be lifted. Just as epidemiologists have had to learn about the virus as it advances, economists must judge its economic toll on the fly.”