While we’ve beaten the proverbial dead horse, well, to death, when it comes to the utter canyon that separates stock market fundamentals from stock prices these days, there’s one asset class — which currently directly occupies 22% of our core mix, and, indirectly, via resource-driven stocks, another 9% — where the fundamentals are intact, and, in fact, present quite the attractive setup.

That would be commodities…

For starters, in that commodities the world over are mostly traded in U.S. dollars, our longer-term weak-dollar thesis makes maintaining some commodities exposure going forward a no-brainer.

Secondly, the world is in stimulus mode like I personally have never seen it:

China is on yet another tear when it comes to infrastructure spending within their own economy; gobbling up much of the world’s industrial commodities production in the process. Plus, with their “One Belt, One Road” initiative, they are rapidly expanding across the globe, financing infrastructure projects from East China through Southeast and South and Central Asia all the way to Europe.

And while there’s much to parse in this massive global outreach — including the potential to provide a huge springboard for China’s own digital currency, which some view as the most credible threat to the U.S. dollar’s global dominance going forward (a serious topic we’ll no doubt broach often and in detail in the months to come) —  make no mistake, with regard to commodities demand, it’s big!

And, as we know, the U.S. is sorely overdue in its own infrastructure ambitions. Hence we look for a trillion or three of fresh government borrowing and spending in that direction over the coming months/years.

Thirdly, given the weak price action over the past decade, commodities producers have notably cut their spending, thus reducing overall capacity.

Yes, contrary to the opinion of many a pundit, inflation is no small risk going forward…

To simply, and vividly, illustrate my point in terms of the attractiveness of commodities vs stocks, take a look at a 15-year graph of the Bloomberg Commodity Index

Side note: Funny how stocks are about the only thing I can think of where the more expensive they get, the more folks want them… Even in real estate, you never hear that it’s a “buyers market” when prices are at record highs…. Think about it…


Bloomberg’s index, by the way, contains everything from crude oil to live cattle: 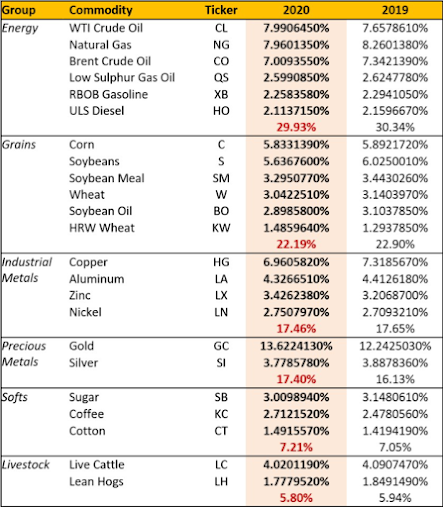 Singling out industrial commodities, here’s the CRB Raw Industrials Index. Note that, despite having rallied strongly this year, it remains ~20% below it’s 2011 China-induced peak:

As for the stark divergence between them and stocks, as hedge fund manager Kevin Smith recently pointed out, such an extreme is rare (this would be the third time [lower yellow circles] in nearly 50 years). And when it’s occurred in the past, it’s preceded troubling times for stocks: 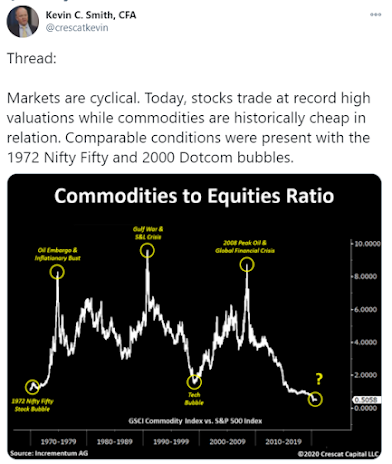 Here I’ll place those lower yellow circles where they fall on a chart of the S&P 500 Stock Index: 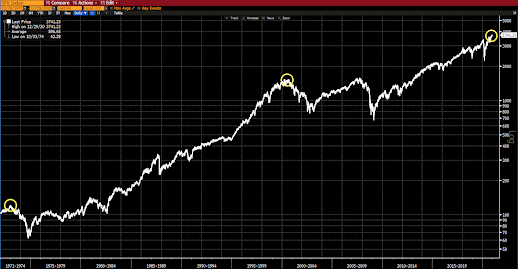 No predictions here, just paying attention to history… which never repeats, but, per Mark Twain, “often rhymes…”
The U.S. Dollar


As for the dollar’s prospects going forward, they’re — in our view — not so longer-term rosy, which, again, is bullish for commodities prices and, on balance, is good for stocks in general as well.

So why are we bearish the dollar longer-term?

Well, for starters, out of Federal Reserve (Fed) necessity.

Yes, that’s right, it’s the Fed’s aim — while they’ll not admit it — to do all they can to keep the dollar under wraps.

As, for one, were it to break out strongly to the upside, an estimated $13 trillion in dollar-denominated debt in the hands of foreign entities would put those entities in a world of hurt (and, never forget, one person’s debt is another person’s asset).

I mean, imagine operating a non-U.S. business having borrowed, say, 50 million in U.S. dollars. You of course exchanged those dollars for your local currency so you could put them to work. However, your lender is to be paid back in, of course, U.S. dollars.

That’s the potential makings of the sorts of currency, and, not to mention, debt crises that have historically roiled markets the world over.

Therefore, in that event, the Fed will absolutely open its swap lines (offering instant short-term dollar liquidity to foreign central banks) galore, as it did during the March panic.

Check out the spike in the dollar as markets panicked in March: 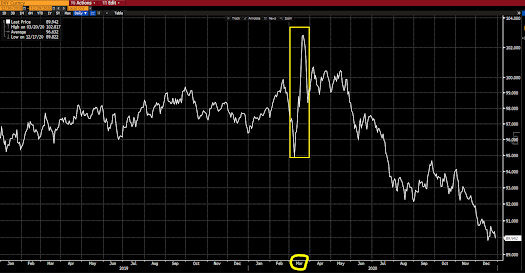 For another, when it comes to the politically-powerful/large employer U.S. exporters, a weak dollar — on balance — is essential to their global competitiveness.

Yes, that’s right, the U.S. consumer (who, in terms of his/her consumption, directly benefits from a strong dollar) is entirely left out of that equation…

For yet another, keep in mind that the federal government is running deficits (thus borrowing to make ends meet) that would make any and all drunken sailors blush.

A weakening dollar (a result, in and of itself, of all that borrowing and spending), all else equal, makes managing that debt far less painful. I.e., their future debt service payments, in real terms, are effectively reduced. It’s called “inflating away the debt.”

And, of course, yes, I know what you’re thinking…. gold works nicely under this setup…

Now, all that dollar-bashing aside, short-term there’s some real risk to our thesis.

For, more so perhaps than any other reason, on this one we’re definitely with the crowd.

I.e., the bear side of the dollar boat is standing room only.

As evidenced by the fact that futures speculators are net short the dollar like they haven’t been since 2011:

Should, for whatever reason, the dollar threaten a rally we’ll see some serious short-covering that would in effect exacerbate its upside.
Technically-speaking, it’s indeed threatening a bounce:

Which, should it play out, would likely play havoc with stock and commodities markets — stocks, given recent correlations, for certain…
So, absolutely, any and all longer-term theses/expectations when it comes to markets will experience numerous counter-trend, or counter-expectations, moves along the way.
The secret to long-term investment success is to not react to short-term deviations from expectations. However, at the same time, it’s equally important to constantly reassess those expectations in light of ever-evolving conditions.

Adjustments, therefore, are to be based on changing overall general underlying conditions, not (while it’s to be considered/interpreted in terms of signal) on the price action that occurs on the surface — be it in commodities, currencies, stocks, etc.

To use a sailing analogy, the wind matters, but the tide matters too. If you don’t know what the tide is, and you plan everything based on the wind, you are going to end up crashing into the rocks.”

I’ll try to wrap things up in Part Six…