Macro Update: We May Be Onto Something…

Our proprietary macro index remains, for the second consecutive week, out of the red, although still not in the green either. Its overall score rested at 0 this week. 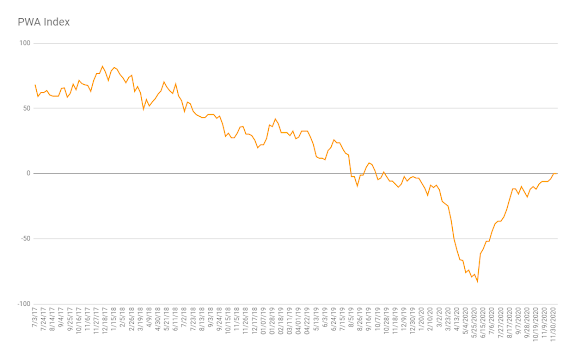 29% of its data points score positive, 29% negative, 42% neutral.
Two — weekly mortgage purchase apps and the stock/bond ratio — saw their scores improve a point.
While two — auto sales and the ISM Manufacturing Survey — gave up a point.
Mortgage Purchase Apps (from neutral to positive):

Auto Sales (from neutral to negative):

The November jobs report, released this morning, showed 245k new jobs created against a consensus estimate of 500k — i.e., a big miss.
The unemployment rate did drop .2% to 6.7%, although, alas, for the wrong reason — the labor force participation rate declined .2%, to 61.5%: The unemployment rate declines as folks leave the ranks of those working and of those desiring to, and looking for, work.
To get a feel for how far we’ve yet to go to get back to pre-recession levels, here’s our graph of total U.S. employees. It’ll take over 400k new jobs a month for the next two years:

Regular readers know that we believe that, at long last, inflation is likely on our horizon (read here, here and here).

Here, from our October 21 post, is me on inflation, and, in a nutshell, the opportunities and risks inherent in the go-forward setup:

“Any narrative that supports rising inflation going forward flies in the face of burdensome demographics, extreme debt levels, present political and geopolitical trends, etc. — as those are all arguably deflationary phenomena. Thing is, we are about to experience an utterly massive government spending campaign (arguably inflationary), plus, there’s what they call stagflation — inflation that occurs during a period of economic malaise. I.e., stagflation has more to do with capacity constraints (I know, there’s that “output gap”) than it does growing demand, and higher interest rates under such circumstances has much to do with the need to issue debt (again, the US govt is now 40% of GDP) that exceeds the market’s capacity/willingness to absorb it (at record low interest rates, that is). Of course the Fed has a plan for the latter.

As for markets, ironically, a weak dollar, low interest rate, high government spending environment, by itself is bullish for equity markets. And I firmly believe we’ll discover opportunities therein to exploit going forward. However, without a true market-clearing bear market bringing valuations down to fundamental reality, prudence will demand that we employ smart hedging strategies well into the foreseeable future.
That’s a setup that’s also bullish for commodities; many of which that are not coming off of longest-ever bull markets (like U.S. stocks). Quite the opposite in fact.”

By the way, “stagflation” is not our base case going forward…
Here’s more from our November 17 post:

“As I’ve suggested lately herein, I’m leaning toward the rising inflation camp as we move firmly into 2021. Which is a position at odds with that of a number of economists/macro thinkers whom I have great respect for.

Their position is that with such low prospects for filling a crazy-wide output gap (potential GDP vs the real thing) inflation doesn’t stand a chance. My position is that with the likelihood of record fiscal stimulus — and a more-than-willing Fed — actually creating liquidity (something Fed printing by itself does NOT do), occurring against fractured global supply chains will indeed have inflation, at long last, on the rise.

But then, where I veer from the inflationista’s camp is what’s going to happen with interest rates. Those who believe as I do (on inflation) tend to believe that interest rates will naturally — as market forces demand — increase along with inflation.

Well, while I get that, and I do suspect we’ll — off and on — see rates higher than they are currently, the notion that they’ll rise to any detrimental degree runs headlong into the Fed.”

From the US Manufacturing PMI November report:

“On the price front, input prices increased markedly and output charges rose at the fastest pace for over two years as firms sought to pass these higher costs on to customers.

Supply chain disruptions led to a sharper and marked rise in input costs during November, as raw material shortages and COVID-19 restrictions pushed prices higher. The rate of cost inflation was the fastest since October 2018. Stronger demand conditions allowed firms to partially pass-through greater cost burdens on to clients, as selling prices rose at the steepest pace for over two years.”

From the Global Manufacturing PMI report:

“November saw input price inflation rise to a two-year high, leading to a further increase in average selling prices at manufacturers. Part of the rise in costs reflected higher demand for raw materials as purchasing activity expanded for the fourth month in a row. This increased pressure on already stretched supply chains, contributing to the greatest lengthening of average vendor lead times since May.”

Inflation Breakevens (the difference between the yield on, in our analysis, 5 and 10-year treasury notes and 5 and 10-year TIPs [treasury inflation protected securities], representing inflation expectations going forward):

So why’s inflation such a big deal?
Well, for one, replace “inflation” with “cost of living” and you should have a different feel for the concept.
And, for another, rising inflation is generally accompanied by higher interest rates. Now think about rising interest rates amid the greatest pile of debt the world’s ever seen, and, well… allow me to repeat what I wrote back on October 9th:

“My black arrows point to how after the past several recessions (grey shaded areas) total corporate debt cleared only to a point that left more on the books than the bottom of the one prior. My red arrows point to how interest rates peaked at a lower spot than they did at the peak of each prior expansion. My red circles point to how interest rates rested at zero when debt peaked during the 2008 worst recession since the Great Depression, which is where they essentially sit currently, while debt, alas, ramps ever higher: 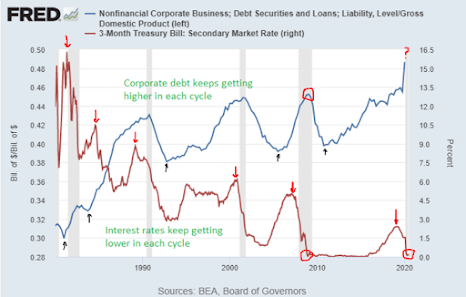 And here’s the proverbial icing on the cake. 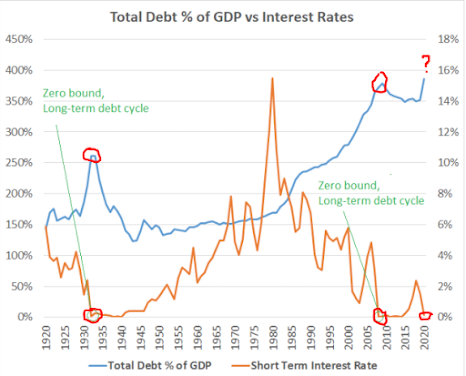 Just imagine what might occur in financial markets given current (and rising) debt levels should the economy indeed show the kind of strength that would typically inspire a higher interest rate regime.

Yep, you got it, utter financial market disaster! I.e., the enormity of the debt is simply more than rising revenues in a better economy — with rising interest rates — can, in the aggregate, ultimately service, without perpetual government intervention that is.”

So, yes, perpetual intervention is virtually what’s in store if the powers-that-be are to attempt to keep this bubble afloat. And, make no mistake, they indeed are to attempt such a thing!

And, by the way, it’s not just the U.S. central bank we’re talking about. Here’s economist Peter Boockvar on the latest from the BOE (Bank of England) and the ECB (European Central Bank):

“12/4 Based on comments from a Bank of England member and a story on the ECB, at least these two central banks are guaranteeing that they will overstay their easing welcome even though we are on the cusp of mass vaccine inoculation.

So notwithstanding all the 2020 easing that took place because of Covid, there is no intention of pulling back without Covid. This again is known as asymmetric policy.

BoE member Michael Saunders, who is a big time dove, said there “may be some scope to cut the Bank rate further” which means below zero. They still haven’t figured out that NIRP is a tax on bank capital.

With respect to the ECB, Bloomberg is reporting that they may extend QE to the middle of 2022 somehow expecting a different outcome after all these years of trying even with a vaccine even though that vaccine is the greatest economic stimulus method we can possibly have.”

When it’s all said and done, this is not the setup we’d ask for, but it’s the one we got. And while indeed stocks would have to fall a long way, in my view, to catch down to fundamental reality, that fact alone — and the attendant consequences should that occur — given today’s debt and interest rate backdrop, present us with unusual clarity in terms of portfolio allocation going forward.

On that, here’s from our November 18 post subtitled A New Paradigm: A Synopsis of Our View on Probabilities From Here: :

“So how do we accommodate our thesis on behalf of our clients?

As for our asset class focus beyond gold (our current top position [outside of cash and ultra short-term corporate bonds]), we’ve been incrementally shifting to a mix that reflects the opportunities, and risks, inherent in the thesis summarized above. I.e., commodities are prevalent, as are developed foreign and emerging market equities; while our top 5 U.S. sectors, in order, are now materials, consumer staples, healthcare, energy and industrials. Plus, we continue to hedge against a major equity market downturn; presently with strategically placed, and sized, put options on the S&P 500 Index.

Lastly, and most importantly:

While this synopsis presents our view of probabilities going forward, and highlights how we’re expressing that view in client portfolios, we recognize, and embrace, the fact that the world is a most dynamic place, and, therefore, so must be our analysis. I.e., we, under no circumstances, wed ourselves to our thesis, which is an ever-evolving work in progress. We, at all times, remain humble, open-minded and flexible when it comes to the allocation, and preservation, of our clients’ personal wealth.”