Macro Update: Back in the Red…

As our macro index has been climbing its way out of virtually unfathomable depths of late, I suspect you’ve noticed an air of skepticism in my commentaries.

That largely stems from my awareness of the sheer enormity of support the powers-that-be have brought to bear in their efforts to avoid what seemed destined to be a deep, protracted recession and historic bear market in asset prices.

I.e., the recovery has been entirely thus far void of any semblance of organic, fundamental underpinnings.


It also stems from my study of major financial crises past and the fact that without exception they were the culminations of years of unrelenting buildups of private sector debt.

Therefore, graphs like the lower right from the Bank of International Settlements’ (the central banks’ central bank) latest quarterly review trouble me:  I red-dotted the U.S. debt service ratio in ’08 and current… 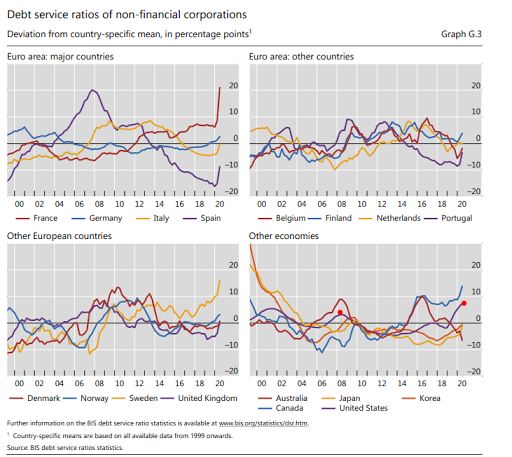 And, not to mention, this one (blue line) from the St. Louis Federal Reserve, which you’ve seen herein before:  grey areas denote recessions… 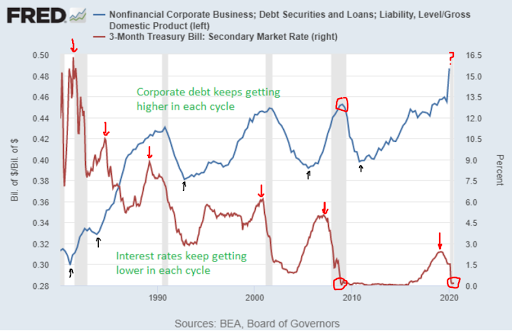 As for the “support brought to bear”, well, the federal government has literally increased its debt by an incredible $5.2 trillion dollars, annualized, so far this year.

Now, if you’re thinking all was dandy pre-covid, well, think again; in 2019 the Federal government ran just shy of a $1 trillion budget deficit.

Folks, that’s called debt-fueled growth, which, again, is not the stuff of sustainable prosperity-producing economies…

While the improving data has, well, improved, I’ve been hinting and charting that some of the still-negative-scoring data has been rolling over of late.

Therefore, I wasn’t the least bit surprised to see our index dip back into the red this week, albeit slightly.

After two weeks on the flatline its overall score dipped to -4.08: 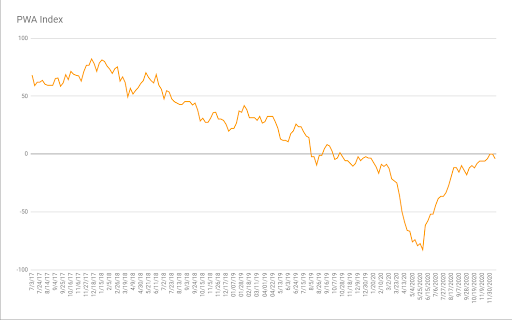 Four inputs gave up a point…

While two gained a point:

Small Business Hiring Plans, ironically (given the above):

Being that small businesses — the employers of 2/3rds of our workforce — are the backbone of the U.S. economy, let’s dig a little deeper into the latest NFIB survey,

For starters, it’s puzzling that overall optimism seems to be waning when we consider the euphoria discounted in recent equity market action around the prospects for vaccines and for fiscal stimulus being lavished onto the economy in the coming months.

Here’s a look at the index’s 10 components: 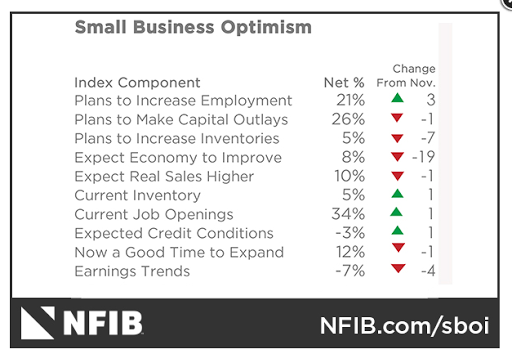 While it’s not all bad — I like the improving employment picture — the fact that the biggest decline came in the “expect economy to improve” category is a bit bewildering, given Wall Street’s giddiness over next year.

Perhaps small business owners are seeing something Wall Street isn’t? Or perhaps it’s that they’ve been among the ones who’ve truly suffered this year (Wall Street certainly hasn’t) and are therefore responsibly guarded in their view of what’s to come. Or perhaps they simply refuse to blindly buy into the notion that, just like that — given what it’s taken in terms of borrowing and spending to ostensibly right the ship — things are going to soon get back to normal… Hmm….

My best guess going into next year is that, indeed, Wall Street’s onto something in terms of the return of animal spirits. Although, per some of the latest data, not to the extent it expects.

The fact that consumers have been paying down revolving debt, while presently saving at a 13.5% of income pace — while nothing at this point long-term conclusive — is reminiscent of the Japan experience; where the private sector became ultimately interested in repairing its balance sheet — which had long-term effects on both economic activity as well as policy: 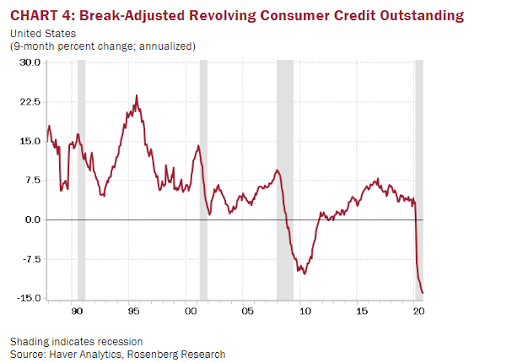 And here’s our up-to-date charting of the 3 most-followed consumer sentiment surveys:

So, THE question being, if/when the consumer truly engages with the fruits of his/her own labor, will the Fed (not to mention the federal government) to any degree be willing to disengage?

If not, look for inflation to accelerate (I expect it may regardless), and for the bond market to attempt a selloff (interest rates rise).
And should the Fed stomach anything much higher than 1% on the 10-year treasury, make no mistake, stocks will suffer mightily when suddenly corporate cash flows, and p/e ratios, are discounted against something higher than a near-zero rate of interest.
Or, if, indeed, government, or the Fed, at all disengages, imagine the uproar (downturn) in stocks in that event. I.e., remember the 19.8% SP500 beating in Q4 2018 when J. Powell & Co. dared to bump the fed funds rate up a smidge while attempting to at the same time reduce the Fed’s mountain of a balance sheet.
That sure taught him! He recently stated that he’s “not even thinking about thinking about raising rates.” Which of course makes sense given current conditions.
However, the Fed projects that they’ll keep the fed funds rate near zero through 2023. Which, frankly, is ridiculous! Although it speaks to how aware they are of the debt bubble we’ve been harping on herein since early 2019.
Now, you’d think such a statement — given what it would typically imply about the Fed’s 3-year economic outlook — would send shivers down Wall Street’s spine, and stock prices into a tailspin. Ah, but remember, stocks aren’t trading on economics these days, not remotely… which they don’t when they’re bubbly…
I mean, make no mistake folks, the latest ascent to record stock prices has had everything to do with the fantasy (though understandable) that the government, and the Fed, will continue to pour trillions of dollars into financial markets forever and ever amen.
Now, again, fantasies (understandable or otherwise) notwithstanding, given the massive amount of leverage in the system, today’s policymaker has no stomach for market meltdowns. I.e., trillions more will indeed be brought to bear (but surely not at this year’s pace???)…
And I expect — amid constant risk of a macro-driven sentiment, and equity market, flip — stocks will periodically love it!
Hence our tilting client portfolios to the sectors and asset classes that tend to do well in a rampant money-printing, borrowing and spending environment.
Have a great weekend!
Marty