So, a little bit ago I stuck my head in the fridge and saw this can labeled “Starbucks Doubleshot Energy” and, well, the following happened.

Read at your leisure… 😎

Regular readers may have noticed that I’ve warmed a bit more lately to the notion that there may very well be some upside left in stocks from here (of course, particularly short-term, one never knows). And that’s despite the reality that 20 million Americans remain on some form of unemployment assistance, that we’re operating amid a corporate debt bubble that is not only the largest in history, but its credit quality in the aggregate is, well, horrendous; some $1.4 trillion of corporate debt literally sits on the balance sheets of insolvent companies yet to implode, and, well, there’s more (read this week’s main message), but you get the gist.

Earlier today I clicked on a link that took me to a 6-minute interview with a chief strategist at Invesco who basically told a story that, if I bought it, would have me throwing virtually all caution to the wind and backing up my truck (if I had one) to the stock market.

Virtually every concern the interviewer expressed was met with the likes of:

“Investors are looking past covid to next year when things get back to normal. Holiday sales are going to be strong as folks are optimistic about the future and eager to spend. Liquidity is extremely high and consumers and businesses have easy access to credit.” And so on…

Well, okay, definitely, investors are looking past covid and are feeling uber bullish about the stock market at present; that’s the reading from our own Fear and Greed Barometer.

As for consumer spending, well, that’s not consistent with, for example, the latest consumer sentiment reading from the benchmark survey performed each month by the University of Michigan, I touched on that in last week’s macro update. The Conference Board’s latest survey score notched lower as well, and Bloomberg’s weekly survey sits at 49.8, it was 67.3 in January.

While I can excuse an analyst’s wishful thinking when it comes to the holiday shopping season, the gentleman’s statement that consumers and businesses have easy access to credit, well, we’re either looking at an egregious oversight, or, forgive me, utter ignorance of the data (there’s another possibility, but we won’t go there).

“Confirming evidence that the distance to “normalcy” is greater than some might have us believe shows up in much of data that we don’t formally score, yet we assess nonetheless. Like the Fed’s Senior Loan Officer Survey…

October’s was released on Monday, and, well, banks aren’t feeling at all rosy about the credit worthiness of businesses or consumers these days.

Respondent’s said that “on balance, they tightened their standards on Commercial and Industrial Loans on firms of all sizes”, plus they reported weaker demand from their customers for the same. They also reported tighter standards and weaker demand for all major categories of commercial real estate loans.

As for households, standards were tightened on residential mortgage loans, as well as on auto, credit card and other consumer loans: 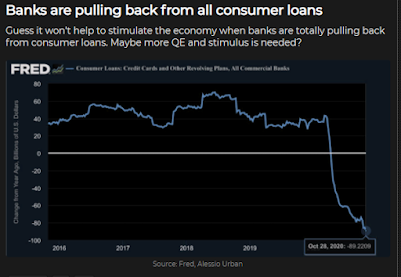 I just listened to RealVision’s daily market wrap: Managing editor Ed Harrison, a smart and thoughtful macro analyst, made the case that the next few months are going to be extremely tough on consumers, the businesses they frequent, and, in particular, on our healthcare system — based on the recent trend in covid cases.

Today’s weekly jobless claims number was the first in 5 weeks that actually saw an increase by a not-small 41k. The previous week’s number was revised up as well. In our past couple of macro updates I’ve pointed to data points whose graphs were showing ominous signs of rolling back over. All of this suggests that indeed the next few weeks are likely to be tough ones.

Now, Ed also mentioned that “stocks aren’t the economy” and that, as bad as things may get in the near-term, stock prices may very well hold up just fine. That’s the notion I’ve been warming up to of late.

It’s not that I’m now, or have ever been, in the “stocks aren’t the economy” camp, as it’s been my direct observation, and intense/deep study of history, that, indeed, in the long-run stocks do reflect their underlying companies’ prospects for growing their earnings (hence, the economy). But, clearly, at the moment stocks are in no way whatsoever trading on anything that I might deem fundamental. They are trading entirely on liquidity, on flow, and on the prospects that interest rates are going to stay at essentially zero for eternity.

Ed mentioned a recent guest who calculates that stock prices have yet to even reflect the degree to which the Fed has eased during the covid crisis. I.e., that stocks, in the eyes of the expert guest, have quite a ways yet to run even before the next round of fiscal stimulus kicks in.

But here’s the thing, while indeed smart, mathy folk can simulate valuations based on the history of monetary accommodation and stock prices ad infinitum, at the end of the day the price of a share of stock simply reflects what the very last buyer and seller agreed on; global liquidity, fund flows, interest rates be damned! And I maintain that were it not for the Fed literally breaching the dictates of the Federal Reserve Act and bailing out hedge funds by taking doomed corporate bonds off their hands — effectively creating a mirage that liquidity can solve insolvency (it unequivocally can’t!) — all the printing on the planet wouldn’t have saved the stock market from a worse than 2008 scenario. And, by the way, the ball game is way far from over…

The question therefore being, how long will people be willing to pay record high prices (valuations) for shares of stock amid a setup that embodies a degree of uncertainty the likes of which modern history has never seen?

Of course I don’t know, but I do know that, for now, nobody cares. And as long as nobody cares, stocks go higher. Who knows, maybe folks will start caring tomorrow…

Be sure and read this week’s main message if you haven’t already, particularly if you’re our client…

So (and I’ll leave it here and go hit the treadmill) when I ask “how long” I’m of course implying that it’s ultimately a when — when, that is, people will no longer be willing “to pay record high prices (valuations) for shares of stock.” The following from one of my recent musings supports that “when” notion:

“Speaking of measuring to determine risk/reward setups, when it comes to stocks, and to put it simply, consider the following ideal conditions that typically precede and accompany sustainably rising stock prices:

1. Low Valuations: Speak for themselves.

Unequivocally not — in the aggregate — the case presently.

Well, both debt and interest rates are at or near record levels, but, alas, at the opposite extreme.

3. Profitability: Speaks for itself.

Not the narrative amid record corporate debt and the deepest recession since the Great Depression.

The next regime of course will have much influence on future regs. Question being, are they likely to (on balance) be loosened or tightened from this point forward?

5. Strong, improving demographics: I.e., real economic growth depends on a growing population, and is most robust when the age distribution favors the young.

Clearly not the prevailing trend in the U.S., or in much of the rest of the developed world for that matter. In the emerging world, however, there are indeed areas with favorable demographics, which we’ll be looking to exploit in the years to come.”