This Week’s Message: A New Paradigm: A Synopsis of Our View on Probabilities From Here

We carried history’s largest, and worst quality, corporate debt bubble into 2020 — and that was pre-covid, by the way.

The setup at the beginning of the year was for an economy that was already exhibiting notable fragilities to inspire a significant amount of central bank intervention that may very well have supported financial markets without major disruption through this election year, while effectively delaying the inevitable demise of the longest economic expansion on record.

However, the tools at the Fed’s disposal were unlikely to suffice in keeping markets afloat much beyond 2020, given the fact that with trillions on its balance sheet and having already pushed interest rates to nearly the zero lower bound, its actions would likely have done little more than temporarily extend what was by then an illusion of economic strength*. And the end of expansions (read recessions) are typically attended by painful contractions in asset prices.

*The “illusion” of economic strength in 2019 is, for just one example, vividly in focus when one considers that the federal government ran nearly a one trillion dollar budget deficit during the year. Not remotely a symptom of a healthy self-sustaining economy:

*Also, note the red X on the graph of our own proprietary macro index. The aggregate score of our 49 data points at the end of 2019 was below zero, denoting heightened recession risk going forward: 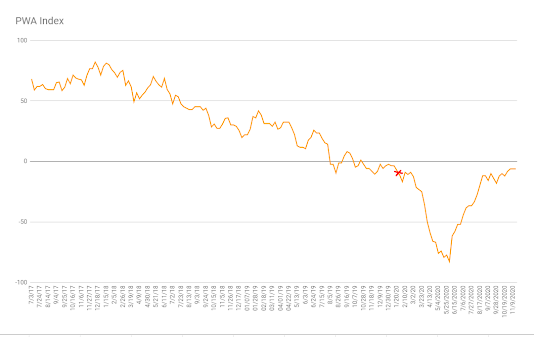 And then came Covid-19, which essentially pulled reality forward, and, at the same time, gave world central banks political cover to literally breach all market and capitalist convention, even break the law in the case of the U.S. Federal Reserve — as it resorted to buying corporate bonds; something prohibited, and for good reason (read moral hazard), by the Federal Reserve Act of 1913.

It was remarkable that the Fed would actually resort to lending money to the treasury for the explicit purpose of funding a special purpose vehicle (SPV) through which it would bail out billion-dollar hedge funds and private equity firms; large holders of the debt of insolvent companies. And, as a result, encourage them — via fresh cash, and an explicit backstop, provided by the Fed — to continue the same practice.

The ultimate problem: While providing liquidity to cash-starved companies can serve to stem a liquidity crisis, it absolutely cannot resolve an insolvency crisis. I.e., a company whose debt exceeds its assets and whose debt-service burden exceeds cash flow can only be sustained as long as it continues to receive outside liquidity injections. Which, of course, is a vicious cycle; as further injections generally come in the form of additional debt. And, without question, once the liquidity dries up the company implodes.

In essence, history’s greatest debt bubble, rather than being pierced through the major deleveraging that a recession would otherwise bring, has been inflated to an even greater extent. Hence, the impossibility that general conditions will return to normal in the foreseeable future, if ever.

Now, as dire as all that sounds, here’s the thing, it all may very well turn out to be bullish phenomena for asset prices in 2021, as, without question, it’s liquidity and flows that are driving equity markets these days. And, clearly, the powers-that-be, worldwide, are more than willing to continue to provide staggering amounts of liquidity as far as the eye can see.

However, and I must strongly caution, as, for example, moratoriums on evictions and foreclosures expire, as a divided U.S. government wrangles over the timing and the direction of future fiscal stimulus, and as it becomes abundantly clear that 2020’s record stimulus pulled forward months, if not years, of purchases leads to a notable drop-off in consumption, there’s much more than a zero chance that stock prices will experience yet another large selloff — akin to Feb/March of this year, if not worse. In which case I see nothing that will keep the Fed from stepping in and utilizing the treasury’s SPV to purchase equity ETFs. Such an event is likely to see stock prices utterly skyrocket!

And of course, before (during, and after) we get to that all-in scenario, where the Fed literally buys stocks, we’ll — government division/wrangling notwithstanding — see major fiscal measures aimed at boosting the economy through the likes of infrastructure spending.

Now we’re talking ever-increasing government debt — which in the U.S. presently amounts to 135% of GDP — to fund that spending. Spending, mind you, that will be essential to keeping the system, as we know it, from collapsing.

So what does that mean for interest rates?

The way markets typically work, given the natural forces of supply and demand, such massive borrowing would force the cost of that debt (read interest rates) higher in order to attract willing lenders. Well, of course measurably higher interest rates against a debt bubble for the ages is a scenario that under no circumstances can be tolerated by those charged with saving “the system.”

Enter the Fed: Via commercial bank reserves* the Fed will in effect facilitate federal government borrowing to the policymakers’ hearts’ content.

*Banks will buy the newly issued treasury debt with their reserves, the Fed will then buy it (the treasury debt) from the banks, thus replenishing bank reserves.

And the term “yield curve control” will I suspect become all too familiar in the months/years to come. It’s a process wherein the Fed suppresses the long-end of the yield curve (keeps interest rates down) by stepping in and buying existing treasury debt every time the market bids its price lower (yields higher). Essentially becoming the market (largely already is); i.e., the buyer of first, as well as last, resort for treasury debt.

Such acts would likely see the likes of gold, not to mention bitcoin, trend notably higher over the coming months/years; as it will be an outright, blatant attempt to devalue the dollar, as the Fed exerts “yield curve control” to pin longer-dated treasury yields to the proverbial floor — in effect preventing rates from rising (naturally) in response to the threat, and the likely reality, of accelerating inflation (an ideal setup for gold).

So how do we accommodate our thesis on behalf of our clients?

As for our asset class focus beyond gold (our current top position [outside of cash and ultra short-term corporate bonds]), we’ve been incrementally shifting to a mix that reflects the opportunities, and risks, inherent in the thesis summarized above. I.e., commodities are prevalent, as are developed foreign and emerging market equities; while our top 5 U.S. sectors, in order, are now materials, consumer staples, healthcare, energy and industrials. Plus, we continue to hedge against a major equity market downturn; presently with strategically placed, and sized, put options on the S&P 500 Index.
Lastly, and most importantly:
While this synopsis presents our view of probabilities going forward, and highlights how we’re expressing that view in client portfolios, we recognize, and embrace, the fact that the world is a most dynamic place, and, therefore, so must be our analysis. I.e., we, under no circumstances, wed ourselves to our thesis, which is an ever-evolving work in progress. We, at all times, remain humble, open-minded and flexible when it comes to the allocation, and preservation, of our clients’ personal wealth.