This Week’s Message: The Inevitable Consequence

Hmm…. I find myself struggling a bit to get this week’s message going. The plethora of stuff we can cover has me doubly challenged. My aim is to hook you from the get go (as this is directed to you clients, and I want you understanding the whys and the wherefores that instruct our decisions regarding your money). And while hook you I may, my main objective is to get you all the way to the net before releasing you back into the turbulent waters we find ourselves swimming in these days.

So I’ll keep brevity in mind as I focus on relevance…
Of course, as citizens, next Tuesday is front and center in our minds. And, sure, it’s a big deal. However, for our purposes, as portfolio managers, beyond the potential short-term event risk, it’s not as consequential as you might suspect.
Now, don’t get me wrong, taxes, spending, regulations, foreign relations, etc. matter, but the extent to which they matter at any point in time depends entirely on the prevailing state of general conditions.
For short-term traders, they matter if they happen to be what the market is trading on at the moment. At this particular moment, my humble view is that the market is trading entirely on the prospects for a new round of stimulus and/or a covid vaccine.
Should, for example, the next administration (??) announce a tax-hike on rich folk the same day the FDA gives Pfizer’s vaccine and Novartis’s therapy the green lights, and a $2 trillion stimulus bill is passed to boot, believe me, taxes ain’t going to matter, stocks will be screaming higher that day. Even if said tax hike extends to long-term capital gains…
So, while a stimulus bill and covid remedies are not likely to occur on the same day, it’s a hugely safe bet that they’re both in our near-term future. With regard to stimulus, there are some really smart folks who believe that a divided government (a distinct possibility if you believe the polls????) could actually mean no added stimulus. I strenuously disagree. The political risk there is utterly palpable… Of course, when we’re talking tax hikes in 2021, a divided government would make them most difficult to pull off…
Divisions across the pond are I suspect posing a headwind for global markets as well. That would be Brexit (the UK’s pending exodus from the EU without a trade deal on 12/31). While the bears — ironically, often the same bears who say there’ll be no U.S. stimulus with a split government — say it’s likely that a trade deal won’t be struck in time to save both economies from ruin, and, make no mistake, to save global stocks from a notable selloff… well, same thing; political risk says otherwise.
As for us here at PWA, it’s the rooted, underlying stuff that dominates our attention.
So, with brevity in mind, I’ll run through a macro highlight or two, saving the “good stuff” for Friday’s macro update:
As we’ve been stressing herein for well over a year, corporate balance sheets are historically strained (a condition that typically precedes systemic financial crises).
Case in point; a record number of S&P 500 companies report liabilities that actually exceed their assets. That’s concerning, to put it mildly: 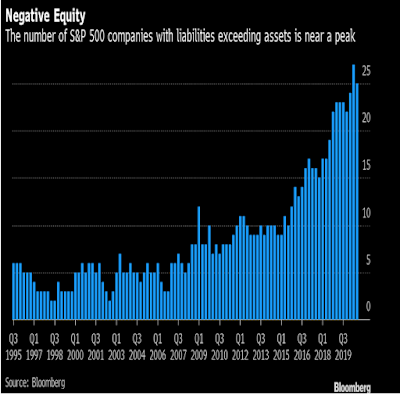 We’ve made the point herein ad nauseam that Fed action at this point (save for what it does for stocks and bonds) is akin to pushing on a string. Ironically, former NY Fed governor Bill Dudley agrees:

“No central bank wants to admit that it’s out of firepower. Unfortunately, the U.S. Federal Reserve is very near that point. This means America’s future prosperity depends more than ever on the government’s spending plans — something the president and Congress must recognize.”

Hence my point on the market being utterly focused on a fiscal stimulus plan…Here’s more, and this should sound very familiar to anyone whose been reading this blog over the past year:   emphasis mine…

“Moreover, the stimulus provided by lower interest rates inevitably wears off. Cutting interest rates boosts the economy by bringing future activity into the present: Easy money encourages people to buy houses and appliances now rather than later. But when the future arrives, that activity is missing. The only way to keep things going is to lower interest rates further — until, that is, they hit their lower bound, which in the U.S. is zero.

When interest rates stay low for long enough, the policy can even become counterproductive. In the U.S., monetary stimulus has already pushed bond and stock prices to such high levels that future returns will necessarily be lower. Assuming stable valuations, expected equity returns over the next decade are probably no greater than 5% or 6%. The 0.7% yield on the 10-year Treasury note doesn’t even cover expected inflation. As a result, people will have to save more to reach their objectives, be they a secure retirement or sending their kids to college. That leaves less money to spend.
Even if people don’t save now, low returns will eventually take a toll. State and local pension funds, for example, will fall even shorter of what’s need to cover their obligations. To make up the difference, officials will either have to raise taxes or cut benefits for pensioners. Either action will leave people poorer, depressing consumer spending and economic growth.”

I know, that sounds dire, but, frankly, it’s the inevitable consequence of decades of the powers-that-be efforting mightily to circumvent the painful, and utterly essential, stage of the business cycle.

To add even more fuel to that dire fire, the sheer level of ever-growing private and public sector debt has to serve as a notable drag on the economy going forward, as the cost of servicing said rising debt sucks otherwise productive capital out of the system…

Well, I promised brevity, and I’m already stretching it, even though I have tons more queued up. I’ll probably dribble a bit of it out in short posts over the next few days.

For today, I’ll leave you with a couple snippets from our “firm-wide trading log.” As you’ll note, in our view, even though the foreseeable future looks anything but bright from our present vantage point, there will absolutely be opportunities to exploit, as well as risks to manage:

10/16/2020 HEDGING ACTIVITY
We added what amounts to a third of the number of current put hedge contracts in 11/13 3000-strike spx puts (or xsp equivalents). This firms up the hedge a bit (has lost some potency given OTM-ness and theta) in case of an immediately-bearish election outcome… We also bought 12/31 4000-strike calls (“) to provide some upside on bullish election and/or positive vaccine news. On average the addition amounted to a cost less than 0.20% of each client’s portfolio.

10/22/2020 (amended 10/26) POTENTIAL ALLOCATION TWEAKS
Europe is a mess with regard to covid; adding notable stress to an already severely stressed economy, and its markets reflect it. A vaccine and effective therapies will no doubt offer hope to equity investors, plus a positive Brexit outcome (which I expect) will help as well. Asia, on the other hand, is having a better go of it on covid, and, if we can believe China’s numbers (we should be skeptical) in particular (although South Korea is also showing promise), economic conditions are better as well.

Question being, which area of the developed world offers the best prospects going forward? While Europe is working off a lower base, in terms of equity price action in 2020, Asia has a somewhat better overall setup right here. Considering reducing our FEZ exposure and picking up a bit more VPL with the proceeds… Will look at country ETFs in the region as well.

In terms of U.S. sectors, energy remains severely off of its pre-covid high. A pickup in activity and/or inflation will likely see the sectors’ equities higher. Valuation is relatively compelling… Considering upping the target allocation at the margin (a great deal of macro risk remains in the system, however), question being, do we go all xle or do we include an individual position, such as Schlumberger?

Commodities are also an obvious play relative to our thesis, one that we’ll likely increase in the months to come. In the very near-term, however, I expect a potentially dollar-driven pullback that would offer up a better entry for adding exposure. In that event we’d reduce our cash exposure to gain it.

With regard to potential adjustments (the above just scratching the surface [I’ve previously mentioned our intent to exploit infrastructure opportunities next year, for example]), each is unique in and of itself. Cutting European equity exposure, for example, demands that we cover all conceivable angles. I.e., the ECB (European Central Bank) meets tomorrow, and, as I mentioned in the note, a Brexit trade deal is pending, and there’s likely a vaccine in our near future. Bullish outcomes here could see a period of global outperformance for this severely beaten down region of the world. Thus, any near-term adjustment we make will likely be modest. Longer-term, however, we may find ourselves owning notably more Asia and less Europe…

Bottom line: Global markets are dynamic, and, therefore, so is our analysis. Intimacy with global macro conditions, painstaking diligence, open-mindedness, humility and proper risk management are all essential to doing it right over the long-term.