This Week’s Message: All One Can Do

I think it’s safe to say that history has never concluded a setup like the current without seeing stocks suffer a significant, protracted bear market in the process (the Feb/March experience btw doesn’t come close). So the question has to be, how does one manage a portfolio amid historic certainty that before the next true expansion or bull market gets underway stocks will experience major, extended losses?

Problem being one of timing, and one of the inherent uncertainty of “historic certainty”. I.e., market history typically rhymes, but it never precisely repeats — to paraphrase one of history’s great phrasers.

I mean, maybe infinite money printing and government borrowing and spending can indeed save the stock market’s day this go-round…

In our view, all one can (or should) do — one who sees forests through trees, that is — is dispense with the messy and profoundly futile business of market forecasting, while forever and painstakingly assessing the prevailing risk/reward setup and investing accordingly.

Which to us — along with hedging crash risk — means, at this juncture, recognizing, crash or not, how the powers-that-be will attempt to manage their way out of what is the greatest debt bubble in the history of mankind.

Well, as the present crisis — and all past modern-day crises for that matter — so vividly illustrates, the powers-that-be know of only one method of “managing” crises — print, borrow and spend money, while cutting interest rates to the bone.

A weak dollar regime — assuming they can sustainably fend off the effects of trillions of dollar-denominated foreign-held debt, and hold interest rates at bay — is therefore to be expected. Couple that with what will certainly be attendant yield curve control (i.e., capped treasury market interest rates), and seemingly obvious investible themes emerge. Gold is the ultimate no-brainer under such a scenario — its at times extreme volatility notwithstanding. Other commodities such as agriculture are likely to do well under such a setup as well.

New government spending will largely focus on infrastructure. The outcome of the coming election will determine the extent to which we invest in traditional infrastructure plays vs those catering to a more environmentally-focused regime.

As for the fundamental long-term challenges around “the greatest debt bubble” ever, well, they’re daunting.

We’ll scratch that surface, visually, by pulling from my “Charts That Trouble Me” file:

Q3 was the worst Q3 ever for bankruptcies: 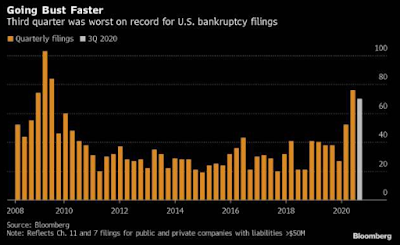 Federal debt is projected (well, certain) to be off the historic charts in the years to come. “Reducing national savings and income, boosting the government’s interest payments, limiting policymakers’ ability to respond to unforeseen events, and increasing the likelihood of fiscal crises.”

The economy will be relying on debt growth far more than productivity in the decades to come. In fact, that pretty much describes U.S. economic growth all the way back to the early 80s: 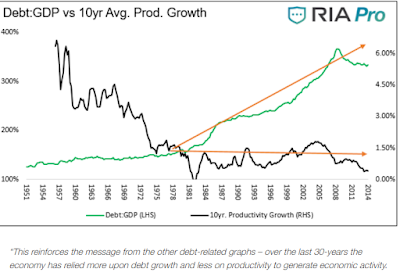 Reinforcing that last point, to quote the source of 4 of today’s featured charts: “The relevance of debt growth versus economic growth is all too evident. When debt issuance exploded under the Obama administration, and accelerated under President Trump, it has taken an ever-increasing amount of debt to generate $1 of economic growth”: 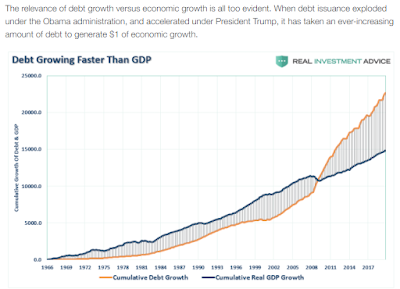 And, alas, decades of attempting to circumvent the cleansing phase of the business cycle has contributed to rising inequality, as participation in the equity market (the seemingly only game in town amid record-low interest rates) is far and away the domain of the wealthy: The wealthiest 10% of Americans own 87% of the stock market: 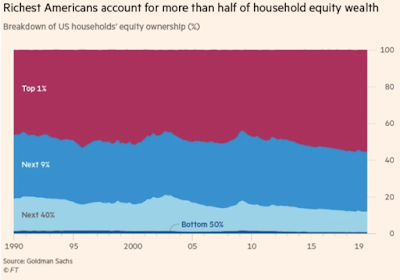 HT Lance Roberts…
Lastly, note that I said “New government spending will largely focus on infrastructure”. That’s absolutely key to our thesis in terms of inflation prospects, and in terms of locating opportunities outside of weak-dollar plays, considering, per the Center On Budget and Policy Priorities below, how the vast majority of government outlays are currently allocated:

“In fiscal year 2019, the federal government spent $4.4 trillion, amounting to 21 percent of the nation’s gross domestic product (GDP). Of that $4.4 trillion, over $3.5 trillion was financed by federal revenues. The remaining amount ($984 billion) was financed by borrowing. As the chart below shows, three major areas of spending make up the majority of the budget:

Two other categories together account for less than a fifth of spending: 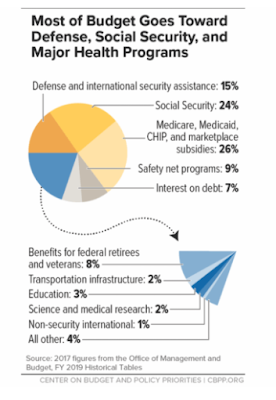