Well, you know me, it’s hard to stay silent on a morning when the Dow was at one point down over 900 points, so allow me to blab for a couple of minutes on what I’m thinking.

Sure, there’s definitely stuff to parse based on who wins, but make no mistake, based on the macro fragilities we began compensating for last August, when it comes to most things economic and markets, we’re irreversibly down the rabbit hole folks. I.e., “we” will no doubt have dug/explored a labyrinth of new tunnels before we exit this debt-ridden fix we find ourselves in.

As for today’s stock market drubbing, given the nature of this year’s trading/volatility, a 900-point Dow plunge should have come as no more a surprise than a 900-point rally might have. Meaning, the latter would’ve certainly been in the cards had a stimulus deal been reached, or a vaccine approved, over the weekend.

As for the market structure stuff we explore each week, the study that jumps out at me the most at the moment is the scoring of our own fear and greed barometer. At -54.55 (denoting rising greed [i.e., high bullishness]) it’s flashing a concerning (crowded to one side of the boat) signal.

Here are four of its components: Just note the red circles; the left being February (before the swift 30+% decline), the right being current. 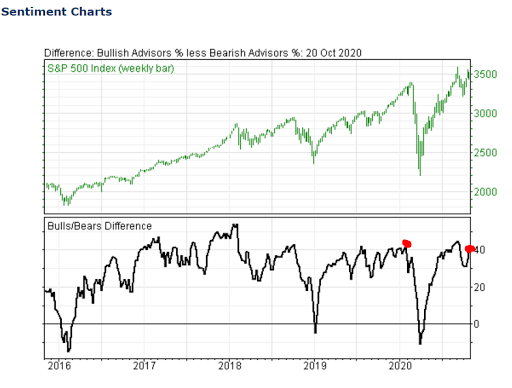 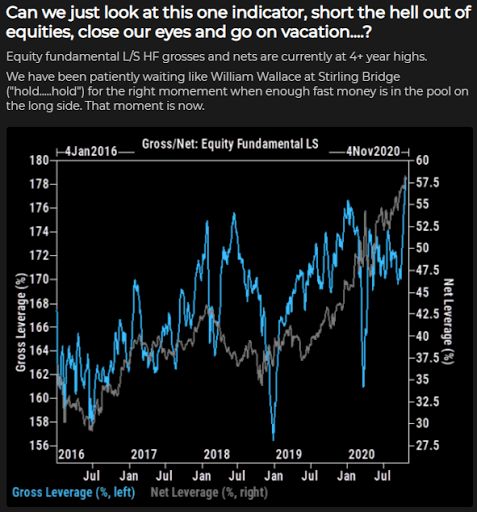 And, well, in terms of short-term leverage (that can spark quite the selling blaze), this one probably takes the cake:

“Margin debt for stock-buying purposes has ballooned a record $175B over 6 months to Sept. In percent terms, the 36.5% surge from market lows has only been surpassed in April 2000 as the Nasdaq was just coming off its bubbly peak.”

I repeat, no predictions here, just measuring the thickness of the ice.