Missing Out On the Most Important Phase of the Business Cycle!

Taking a break from this morning’s macro grind, I thought I’d share this short back and forth between myself and Nick in our firm’s chatroom a little while ago:

ME: Like you keep sayin N, T. Cook is the shareholder’s CEO…. bought back shares like crazy to beef up EPS… all the while, true performance flat… 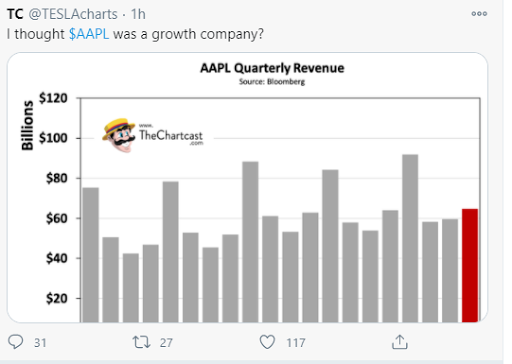 NICK: Yep! he’s a hired hand
ME: Man, S. Jobs was the real deal!
NICK: Yep, just like Bezos, Musk 😜 (marty: he’s taunting me, knows I’m a Musk-skeptic)
ME: So here’s the thing: Innovators make the world better… The reason the US so led the world in tech, etc., was because of its capitalist, profit/loss, creative destruction system. We used to let poorly run companies fail, even the big ones… Today, sadly, our system has been captured by the “hired hands” whose desire to maintain their status quo has them expending a great amount of resources (billions worth a year [double vs 2000]) toward lobbying/owning the policymakers, whose intense pain-aversion (and, not to mention, the utter bribes) leaves them with zero stomach for the most important phase of the business cycle: The downturn, where the worst companies fold (freeing up resources for the up and coming innovators to exploit) and the best companies ultimately get better…
Part 2:

NICK: Ya it’s a shame.. love it or hate it, that’s not something to spend time on right? Each individual at Apple probably does better, their family does better if the CEO exploits the environment to drive stock price. That’s why I try to understand it…. there are other hired hands who are still doing some incredible innovation over there., Their products are getting better and better.,. I have no desire for a new phone after 2 years, and that is different.. But, if we are talking about folding, ya there are some companies that should have gone away.. The FAANG stocks are not even close to being on that list. Luckily for us, apparently the environment is still promoting newer life-changing innovations like Slack, Shopify, Zoom, etc… All integrate beautifully w/ iPhones

.I think the biggest shame is the business of politics.. like my family point.. their families do better if they are elected, and that is their only focus.. Exploiting the individual selfishness of the masses and/or CEOs. Full disclosure, yes I have much to learn, and no I am absolutely not a buyer at these valuations haha.

NICK: Hey you wrote a blog post before I could respond. I’m afraid in that post I look like too much of an Apple/Cook hater.. I am not

My job is not to hate but to adapt.

MARTY: You can narrow it down to where we sit today: Debt/GDP 135% and rising… interest rates at zero, private debt at all time records, Fed balance sheet at $7 trillion… you’ve seen innovation, but under these circumstances it’s rate is destined to slow markedly in the years to come…

Regarding the families of the folks who work for Apple: Cook has literally spent billions on buying back shares, save for employees who own shares (only if the price holds above the “strike price” of the grants, or their own cost bases), that’s more about pleasing the market and padding his own bonuses. Think about that compared to having those billions in hand with which to invest in productive capital!
The FAANG’s aren’t on THAT list but they are absolutely on the big lobbyer’s list… Today’s behemoths work mightily at capturing the politician… you’ve seen Cook in action… I get it, it’s how they survive… but it’s hugely hamstringing of future innovation… And go back to Apple, innovation sure, net gains in revenue… zero! minus-zero factoring inflation… That’s not growth, that’s smoke and mirrors
NICK: I guess re: the blog.. it’s not necessarily a bad thing to own a stock w/a shareholder’s CEO at times.. certainly not Apple here.. but AT&T I think yes

MARTY: That blog post is not about investing, it’s about the evolution from capitalism to socialism (or, say, to greater cronyism)…

NICK: I totally agree regarding us heading from capitalism to socialism in a hurry.. it’s a definite good thing we’ve identified that so we can adapt and make money in this environment. But the last part.. you think we’d have better tech at this point?

MARTY: Yes, actually, re: better tech. And, absolutely, regarding making money in this environment; in that sense our job probably gets easier going forward. The extent to which the narrow path remaining for policy will impact currencies, debt, equity, commodities is — in terms of probabilities — as clear to me as it’s probably ever been…