“The word unprecedented is rarely used properly. This time, it’s being used properly. It’s unprecedented what’s going on around the world, and obviously Covid itself is a main attribute. The economy would be in shambles without the safety net of the CARES Act. In a normal recession unemployment goes up, delinquencies go up, charge-offs go up, home prices go down; none of that’s true here. Savings are up, incomes are up, home prices are up. So you will see the effect of this recession; you’re just not going to see it right away because of all the stimulus.”

As I look over the notes I’ve assembled this week in preparation for today’s macro message, I can’t help but acknowledge that I don’t recall over my 36 years of handling other people’s money having ever expressed such a concerning view of general conditions. And this goes for our messaging herein throughout the course of the past year, even during the months leading up to the Covid phenomenon.
My pre-Covid concerns certainly had to do with growing fragilities in the general macro setup, however the high intensity of my concerns had more to do with how the next recession was destined to pierce what had become the greatest (greatest in terms of size, and in terms of the utterly poor quality of its distribution) corporate debt bubble in history.
So, yeah, if you’re a long-time client, and/or reader, and you agree that I come off gloomier than ever, well, my job isn’t to make you feel good, it’s to call the risk/reward setup as I see it and to invest accordingly — even (especially) during those periods when the equity market price action flies in the face of our firm’s narrative/thesis (which, by the way, is common at market extremes).
So why, then — other than the swiftest liquidity-(lack thereof)-driven selloff in history during February and March — hasn’t the stock market conformed to my thinking? Well, I refer you back to Dimon’s quote above and tell you that the risk is still very much alive that it ultimately will. That’s not a prediction mind you, it’s simply a risk-assessment.
Our macro index surrendered 2 points last week, coming in at an overall score of -12: 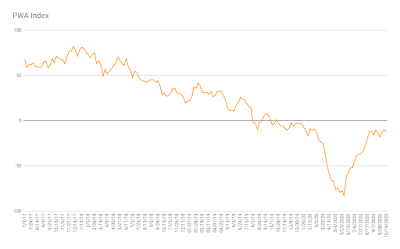 The culprit turned out to be the utter rolling over of the Baltic Dry Index (tracks the price of shipping bulk commodities across the world’s oceans):

Yesterday’s Census Bureau Retail Sales Report, showing an impressive 5.4% year-over-year rise, by itself would have moved our retail sales component into the green. However, that’s not our only source of data on the spending habits of US Consumers. The Johnson Redbook report which comes out weekly, 2nd chart below, paints a different higher-frequency picture. Hence we bumped retail sales up to neutral, which served to keep this week’s overall score move to -2, vs -4 without the improvement.

Other inputs that are visibly threatening to rollover are:
Weekly Jobless Claims (to roll back over in this case)

And
Commercial and Industrial Loans

On the potential plus side, another strong week in commodities’ prices will have them improving our overall score in our next update:
Bloomberg Commodities Index

Mr. Dimon says “the economy would be in shambles” were it not for all the stimulus. Well, our assessment says the economy’s not much to write home about even with it. We’ll have to wait and see what the next round of stimulus has in store.
There’s much more we can report beyond the confines of our proprietary index — stuff like the 695k contraction in labor force participation that pours a bit of cold water onto an improving unemployment rate, lay-off announcements up 186% vs a year ago, and so on — but we’ll save those for another day, hopefully another day when we can report their improvement.
So, in a nutshell, while our index is up hugely off of its June all-time-low, it still suggests that we’re not yet out of the woods. And, per Dimon, the “unprecedented” nature of present circumstances has us thinking that we may in fact be a bit deeper in said woods than the latest data might otherwise suggest.
As Hedgeye’s macro analyst Christian Drake puts it:

“The Retail Sales data flashed some upside, helping to assuage acute concerns around an imminent turn for the terminal vis-à-vis the domestic consumer. For the more cynical, it could also be framed as proving that if you just give people a bunch of money, they will buy some stuff …. implicit in that is the notion that the converse also holds and commerce will roll-over as any residual impacts of stimulus/enhanced benefits fade.”