This Week’s Message: Where We Presently Stand

Founder & Co-Chief Investment Officer
In a recent weekly message we scratched the surface of the presently popular inflation/deflation debate among some of today’s brightest macro thinkers. This week we’re going to take a deeper dive into that discussion and clue you in to where we presently stand on the issue and how we expect to manage it going forward.

The case that inflation will, via official metrics, remain nowhere to be found is rooted in the economic constraints endemic in today’s record high debt, strained general conditions (there’ll be a lengthy recession overhang), demographics and technological advancements.

With regard to debt (blue line below), by keeping over-levered institutions (zombies) afloat that will in effect continue to command and consume otherwise valuable resources, the Fed essentially promotes a serious headwind against the prospects for inflation going forward. 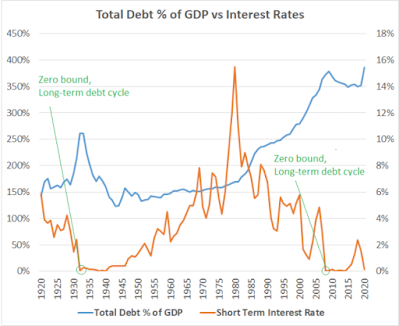 HT Lynn Alden
With regard to strained general conditions, or, let’s say, what I suspect will be a protracted overhang from the current recession, the CBO predicts that the U.S. will experience a deflationary output gap (potential GDP less real GDP) through 2030: 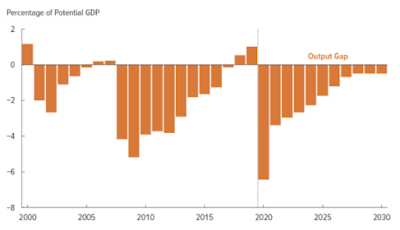 With regard to demographics, the no-inflation argument rests on what is a historically positive correlation between deflation, or disinflation, and slowing population growth.

With regard to technology, of course that one’s easy to embrace;. innovation promotes productivity, and rising productivity is inherently deflationary. 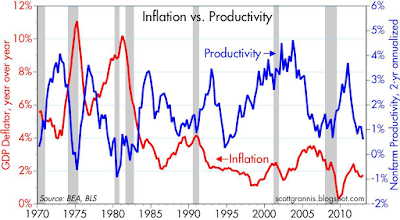 The inflation is coming narrative, on the other hand, contends that massive fiscal injections — with the pain of covid, the continuing rise of inequality, the trend in deglobalization, and continued economic weakness offering huge political cover — will come in such enormous quantity, against a Fed that will continue to suppress borrowing rates (effectively mitigating any rising-rate headwind against inflation), that rising inflation will be virtually impossible to avoid.

“…the Fed’s new approach to potential inflation — let it run hotter — is, contrary to popular opinion, not about their desire to inspire inflation via “forward guidance”, but to give themselves the wherewithal to not address it with higher interest rates if/when it ultimately exceeds the point where their old commitment would’ve had them doing so.

I.e., imagine the Fed hiking rates amid history’s greatest debt bubble when their decades-long practice of bailing out otherwise failed institutions, not to mention rescuing egregiously careless hedge funds and private equity firms (this go round), coupled with financial repression, leaves them with virtually no choice but to in fact inflate the debt away via the printing press.”

So, then, while both narratives have serious merit, and, at this juncture there’ll be no knowing for certain, we albeit gingerly lean toward the inflation is at last on the horizon camp.
The good news is that, per my commentary below, we don’t have to be right on inflation to succeed in growing our clients’ portfolios while most-importantly managing/mitigating market risk going forward.
While the risk of a major equity market collapse will remain heightened, ironically, the inflation-is-coming scenario can lend itself to somewhat bullish market conditions.
In essence, while massive government spending in areas like infrastructure, by itself, could be construed as dollar-positive, the accompanying financial repression at the hands of the Fed is clearly dollar-negative. Which (economic growth coupled with currency debasement), by the way, is precisely what the government and the Fed have every intention of pulling off.

Therefore, beyond the election, and as we enter 2021, we may very well be adding exposures in areas such as materials and industrial equities to exploit targeted spending regimes, while managing a healthy mix of commodities and foreign equities to take advantage of what will highly likely turn out to be a protracted weak-dollar environment.

Now, that said, while high government spending amid a zero interest rate environment makes for an intuitively bullish backdrop, it’s of course never that easy.

A plausible bearish argument — particularly in the absence of a major equity market selloff in the meantime — might be that the threat of rising inflation, and, despite the Fed’s best efforts, rising interest rates at some end of some spectrum, would have equity valuations (having to then discount higher inflation) stretched to their proverbial breaking point. Another would involve factoring in the prospects for a continuation of the present trend in rising geopolitical tensions leading to further global economic stress and potentially severe asset market disruptions.

Bottom line; while the future will no doubt present opportunities for the experienced, thoughtful, prudent maco-focused investor, real risk will permeate the global landscape well into the foreseeable future. Thus, as we’ll look to take full advantage of whatever opportunities lie in store, we expect we’ll be maintaining an active hedging strategy all along the way…