Macro Update: How To Couch The Jobs Report — And — Circumventing the Rest/Recovery Cycle…

So how do we couch the good news around the latest jobs numbers?

Millions of new jobs have been created over the past few months,

millions of folks went back to work over the past few months?

So what’s the difference? Ultimately, they both mean the same thing. In August, for example, per today’s labor report, 1.37 million people went from unemployed to employed. Bottom line!

Yep, that’s true, but in terms of asset prices and politics, how it’s presented can make all the difference in the world.

As for us here at PWA, our job, on our clients’ behalf, is to see things precisely how they are; not how bullish stock traders and politicians might prefer them to be seen…

So, here’s looking at today’s jobs report for what it is:

2. It reflects the “reopening” of the economy, that’s it! Well, I guess we maybe should factor in folks inspired by the loss of their extra $600/week unemployment benefits to go back to work. Oh, and then there’s the 238,000 temporary census workers folded in as well…

4. The U6 unemployment rate, which includes discouraged, marginally attached and part-time workers, declined to 14.2%. That’s better…

6. The labor force participation rate rose to 61.7%. I.e., thus far recapturing less than 50% of the decline from the pre-covid level…

7. Leisure and hospitality saw a markedly reduced rate of job growth versus July: 174k vs 621k. That’s not promising…

9. Job gains in manufacturing were less than half the median estimate among economists. Not promising…

10. Average hourly earnings rose 0.4%, and were up 4.7% year-over-year. Although, note that it’s been lower-wage workers who’ve suffered the bulk of the burden; thus — with more higher-paids remaining in the workforce — bringing up the average earnings number…

To fold in a bit more “reality”, here are a few headlines that have hit since the data for this morning’s report were collected (mid-August),

The above bullet points of course don’t inspire optimism over the potential rate of job growth going forward.
All of the above said, while speedier testing, a vaccine, improved treatment measures, etc., won’t, as they arrive, miraculously get things back to “normal”, they’ll virtually have to seriously move the needle!
Our PWA macro index suffered its first set back in 14 weeks, declining 3.93 points to -15.69 (a negative number denotes odds favoring contraction, vs expansion, going forward). 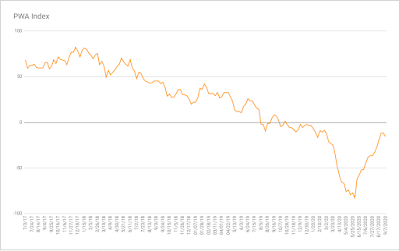 Only two inputs moved enough to justify a score adjustment this week:
The Baltic Dry Index (tracks the cost of shipping dry bulk commodities across the world’s oceans):

As you might imagine, there’s much more about macro I can, and will, report herein, but I’ll leave it here for today with this from the book I just started, The Fourth Turning: What the Cycles of History Tell Us About America’s Next Rendezvous with Destiny by William Strauss and Neil Howe:

“More recently, the West began using technology to flatten the very physical evidence of natural cycles. With artificial light, we believe we defeat the sleep-wake cycle; with climate control, the seasonal cycle; with refrigeration, the agricultural cycle; and with high-tech medicine, the rest-recovery cycle.”

I’d add: Through printing money, and government borrowing/intervention, the powers that be believe they can entirely circumvent the economy’s rest/recovery cycle, and presumably believe that it’s in somebody’s long-term best interest to do so…

“Before, when cyclical time reigned, people valued patience, ritual, the relatedness of parts to the whole, and the healing power of time-within-nature. Today, we value haste, iconoclasm, the disintegration of the whole into parts, and the power of time-outside-nature.”