Founder & Co-Chief Investment Officer
Macro conditions, as indicated by this week’s scoring of our PWA Macro Index, continue, after last week’s hiccup, to show net improvement. Although, not nearly to the point that would have us comfortably allocating assets in a manner reflecting strong odds that the next sustainable expansion is underway.
A rising level of job openings (moving from negative to neutral) and a continuation of the upward trend in raw industrial materials prices (from neutral to positive) was enough to take our net macro score up 5.69 points to -10.00:   Click each insert below to enlarge… 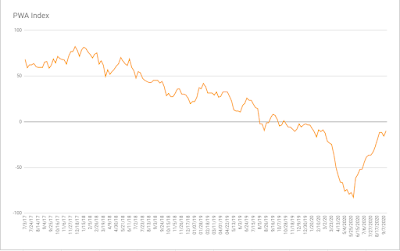 The improvement in job openings, in particular, is nice to see, and, indeed — while of course reflecting the degree of successful “reopening” to this point — is cause for some optimism.
Now, that said, think about the, even during recessions past, once unthinkable situation we find ourselves in. Where, due to a level of unemployment benefits that would make your most ardent socialist blush, no small number of folks had recently been making more while not working than they were while working.
Presuming that such generosity by the powers-that-be in a “market” economy is not the least bit sustainable, the fact that jobs are becoming available to bring folks back to work — when many of those folks will be receiving less income than when they were while unemployed — well, a slowing in the rate-of-change, if not a complete rolling over, of much of the data that brought our index out of its June abyss is I suspect in the not-too-distant cards.
Never mind the fact that, per August’s employment report, 3.5 million of this year’s lost jobs are now permanently lost.
I.e., as I suggested in the opening paragraph, we remain far from signaling the all-clear right here!
As for industrial materials (which [base metals], by the way, we hold as a modest core position) prices, while I hate to pour cold water on hot statistics, well, there’s need of a caveat or two there as well.
While China’s a big buyer of, for example, copper, once again, and the EV market (copper for batteries) is growing, Covid has definitely done a number on production.
Here’s what the U.S.’s “largest metals-related media site” had to say today about the present market for copper:

“The market balance for copper remains in deficit. According to MetalBulletin, some 1.15 million tons of production was lost to the pandemic this year, with a further 672,000 tons lost due to other disruptions.

Demand has also faltered with industries across first Asia, then Europe, and finally the Americas, shutting down from February through June.

While many are now back at work, few are at capacity. Demand remains weaker than before the pandemic hit.”

I.e., the rise in price has a lot to do with the lack of supply…

“There is a strong element of speculation in the strength of market price rises. If the supply market can maintain its output, one plank of the bulls’ narrative going forward may prove to be less supportive than has been the case so far.”

Plus, and make no mistake, the weakening dollar of late has had its impact on metals prices as well. Not to mention, the recent action in the Baltic Dry Index (tracks the price of shipping dry bulk commodities across the world’s oceans) has been unsupportive of any off-to-the-races narrative:

Lastly, having mentioned the dollar, and given its direct impact on all things commodities, as well as our “Narrow Road Out” thesis, I’ll finish up with a few more visuals:
Here’s our standard US Dollar Index chart, which features (bottom two panels) two technical indicators (bullishly diverging) that suggest upside momentum may be gaining a little steam:

And here’s the latest “Commitment of Traders” report showing that speculators are notably net short the dollar, like they haven’t been since early ’18:

Should the dollar move against those shorts — should it spike higher — they’ll be covering (buying) and exacerbating a rally.
Speculators in the Euro (the largest counter influence to the dollar), on the other hand, are hugely net long:

I.e., lots of potential selling pressure should the Euro correct from present levels (which, by the way, are, to say the least, lofty). And note the bearish divergence in the bottom two panels: