This Week’s Message: MUCH More to Play Out…

Founder & Co-Chief Investment Officer
We’ll keep this week’s message short, given the rundown I presented in last evening’s video.
In said video I mentioned that in all bear markets that occurred during a recession since 1927, only one didn’t see the first selloff bottom retested or blown through before it was all said and done. That one occurred in 1949, and it was a bear market (20% off of all-time highs) by merely a hair:

We’re presently 5 months removed from the initial low this go-round, and the market hasn’t even begun to roll over:
2020 Recession Bear Market

With regard to the tech bubble analog, and to reiterate the present state of market internals I touched on in the video, as Schwab’s Liz Ann Saunders points out, yesterday’s action, for example, punctuated the point.

“Yesterday’s record close in interesting company … data compiled by
@Bloomberg reveal that historical days when S&P 500 gained 0.28% or more while 42% or less of members were advancing, were only before & during tech bust (obviously, a small sample size)” 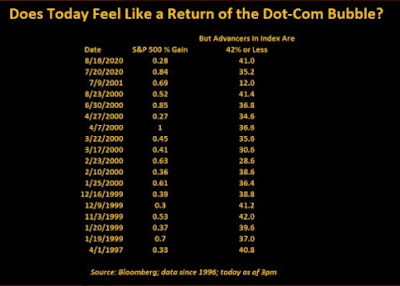 Now, when I say “the market” hasn’t even begun to roll over, I’m speaking of the S&P 500 Index, which currently is more concentrated in its top 5 positions than I believe it’s ever been.

Now, if the market is indeed more than, say, the top 5 weightings in a given index, well, then, things aren’t quite as robust as they might otherwise appear.

Here’s the one-year chart for the S&P 500 Equal Weight Index (i.e., each component weighed the same):

And of course nothing tells that story like a look at the year-to-date results across U.S. sectors.

Of the thirteen featured below, 7 remain in the red on the year:

Of course we should absolutely expect as much given the lousy internals I spoke about in the video.

Yes, as I continue to stress, there’s MUCH more to play out before the curtain closes on this particular episode…

Thanks for reading,
Marty