This Week’s Message: Cash-for-Clunker-esque — AND — The Fed Fears Success…

“New product release next month, and, not to mention, the iPhone 12 is slated to have 4 cameras, AND is expected to be cheaper for the first time than its competition; not to mention 5g support.”

He also cited the commentary he picked up in a CNBC article yesterday morning:

“Apple, a communications device maker, and Tesla, a motor vehicle manufacturer, valuations are at or near record levels, but Cramer isn’t buying the notion that their stocks are expensive.
.
The way Cramer sees it, Apple is a consumer products company that sells must-have technology. As for Tesla, it’s a technology firm that happens to make cars.“If you judge Apple as a pure hardware play, or you judge Tesla as a pure car company, then you’re right, all these moves are all smoke and mirrors,”.

While the stock is trading at a “pretty expensive” price-to-earnings multiple of 29 times for a tech company with a 10% growth rate, it would rank among the cheapest in the industry if valued as a consumer product company, he said.The host particularly likes Apple for its service business and customer loyalty, which is siphoned through its various devices, such as handhelds, laptops and watches, that provide multiple pools of revenue.“Apple makes necessities in this digital era,” Cramer said. The stock “could pull back as many of the owners sell a share of the four to lock in their gains—that’s the old pattern—but after the split-induced pullback, you know what, time to buy again.””

“Interesting…. and, playing devil’s advocate, it’s a stretch in my view… It’s been a very long time since you would’ve viewed Apple in any other light…. The “29” only makes sense — mathematically — in a low inflation zero/neg interest rate environment… You get fiscal stimulus, easy fed, vaccine, and, viola!, you maybe get a little inflation…. And those p/e justification metrics that are discounting zero inflation, if not deflation, become insanely high… That’s when sanity gets priced into the stock…”

And here’s me expanding on that thought:

“…if things don’t entirely roll over, say, post election, the year-on-year data when we get to next February and March will look incredible… Throw in fiscal stimulus, and suddenly you have something very different-looking than low inflation/deflation forever. Throw in a vaccine and return of confidence too, Wow!!… What does that look like for the equity markets when valuations are pricing in low inflation/deflation forever? It’s counterintuitive, but it’s a risky narrative.”

So there I go again, pouring cold water all over a hot stock market rally!

Thing is, valuations, as I suggest above, are stretched, and for now the macro backdrop remains the definition of precarious. And, clearly, what’s driving stocks to these historically-high valuations is, ironically, policy response to the precarious macro backdrop. Therefore, again, something different than what’s priced into these historically-high equity valuations, something like a less-accommodative Fed, let alone what I stated in our research thread above, will likely yield a different outcome than present momentum might otherwise dictate…

On the flip side, what happens if/when it turns out that the recent data boost off the bottom turns out to be merely a reflection of the Cash-for-Clunker-(the Obama Era temporary auto-industry-stimulus program)-esque (auto sales screamed higher while the program was on, careened lower when it expired) nature of temporary government intervention, and “the market” comes to realize that while money-printing works wonders (till it doesn’t) on asset prices, when it comes to the economic reality that a deep recession occurring amid already-easy monetary policy — and a corporate debt bubble for the ages — it’s akin to pushing on a string? Well, that would be the “reality phase” we previously addressed herein.

This morning, Jerome Powell gave his keynote address at this year’s “Jackson Hole” (virtual this year) summit and, as promised, announced a rejiggering of how the Fed views, and will deal with, inflation going forward.

In a nutshell, when the Fed’s measure (an important distinction [see postscript below]) of inflation reaches, or breaches, their traditional 2% target, they’ll refrain initially from doing anything to tame it. They’re now looking for an “average of 2%” over time. I.e., they feel they’ve got some catching up to do, presumably…

So why do I say “presumably”? Well, while I’ve located no pundit so far who agrees with me, so I could be off the mark, I’m thinking that the change is not about the Fed committing to do whatever it takes to generate a little healthy inflation, but rather it’s about the Fed recognizing that when you take all that they’re doing, throw on a massive amount of fiscal spending (infrastructure, etc.), lo and behold they may finally “succeed” after all in creating some real inflation. And if they responded as their old commitment to price stability dictated, well, they’d then run the risk of catalyzing the crumbling of the global debt edifice that supports present-day asset valuations  — yes, that’s as potentially catastrophic as it sounds…

Note: While in the near-term it’s my view that indeed the Federal Reserve governors fear their own success on inflation, the “benefit” of letting it run hotter over the long-run is that it addresses the mammoth amount of debt the Federal government has added, and will continue to add, to its balance sheet. I.e., over the long-run it’ll be higher taxes or higher inflation that “allows for” such ongoing fiscal profligacy… Sadly, I suspect it’ll have to be both…

In closing, and all of my risk-mongering aside, make no mistake, when I mention things like “infrastructure”, for example, know that there will absolutely be opportunities we’ll be looking to exploit as these crazy times continue to unfold.

P.s. “No inflation” the Fed says? Well, the real world begs to differ: 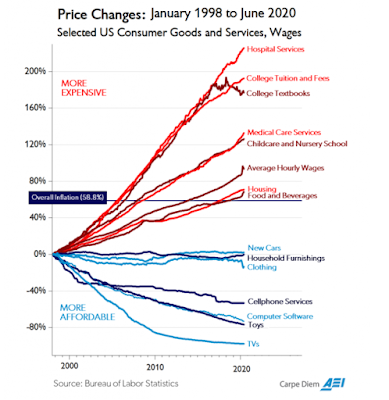