Macro Update: It’s All About Folks — OR — How’s the Traffic Out There?

Housing permits and starts have nearly recaptured their pre-recession uptrend.

While it’s got a ways to go before recapturing its previous highs, intermodal freight traffic just broke out above the down trend that began in late-2018. Rail carloads by themselves have shown a notable pickup as well, although they’ve yet to break trend.

Truck tonnage, on the other hand, took a turn for the worst last month:

While, again, we have a ways to go, taken all in, per Cass Freight’s monthly analysis, an encouraging volume of stuff’s been moving across North America lately:

So, no doubt about it — and I’ve seen it lately while on the highway — folks have been buying stuff. Which largely explains the latest boost in our proprietary macro index: 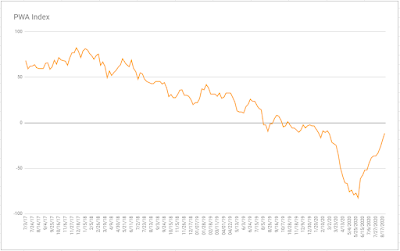 Yes, folks, it’s all about folks in a consumption-driven economy. So, as an investment firm that sees macro as all-important when assessing risk/reward setups, we have to focus intently on folks!
Thus, goes without saying, their confidence is key. And, alas, I’m not crazy about what the latest sentiment signaling portends for the above data, and more, going forward.
Consumer Confidence:

I suspect you’ll agree that the extent to which folks are losing their initial boost of optimism off of that epic low has something to do with the presumably impermanent source of extra income that no doubt contributed markedly to the encouraging freight data referenced above: 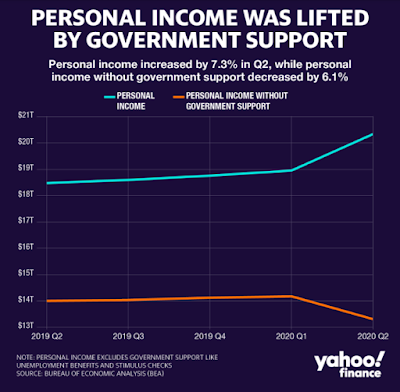 Aside from a terrible case of halitosis (the bad breadth we’ve been addressing herein) in the stock market, about the only financial market data point (featured in our macro index) worth reporting on this week is the developing negative divergence in the stock/bond ratio (stocks underperforming bonds of late):

In closing, here’s a note I sent to the newest official member of our portfolio management team (an exciting promotion from within that we’ll announce soon) on the importance of rate-of-change analysis:

“We were talking about ways of understanding/articulating “rate of change” in the data.

Here’s one way to think about it:

When you’re driving down the road, while entering the highway, when the coast is clear you press on the gas; i.e., you begin accelerating; i.e., your speed increases relative to your speed before, and as, you entered the highway. In other words, the rate of change of your speed picks up on a steady and consistent basis right up until you reach cruising speed.

If you see flashing (hazard) lights up ahead, and/or some sort of congestion, or commotion, you begin to slow down; i.e., you’re still moving forward but your rate of change is now decreasing as you sense potential danger ahead. You may ultimately have to come to a full stop… God forbid you become a participant in the “crash”.. It happens!

When we analyze the data from a rate of change basis, we’re constantly receiving signals of what lies ahead… Like we discussed today, retail sails while higher last month, saw a declining rate of change… possibly telling us something about what’s on the road ahead…

As for today’s screwy environment, you might liken it to entering a very busy intersection, where the signals are out, and everyone’s nervously inching forward, trying to establish that it’s their turn, but scared to death that someone coming from another direction might fail to heed the risk/reality of the situation and “crash” right into them… Fits and starts, sudden stops, rate of change rising, then abruptly falling, yada yada…”