Our PWA Macro Index continued its climb out of the abyss this week; coming in at -27.45, a notable improvement of 5.88 points. Three components saw their scores increase, none decreased.

On a less-rosy note, merely 22% of our 51 inputs presently score positive, 49% remain negative, 29% neutral. I.e., we’ve still a long ways to go before feeling really good about the present state of general conditions. 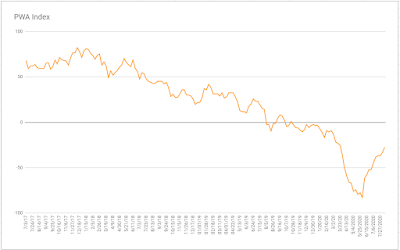 While the aggregate of these global surveys scoring above 50 is unambiguously positive, I have to say that this is one of the most misinterpreted data points among investment professionals who view themselves to be macro-savvy. Twice recently I found myself messaging top analysts at Wall Street firms, cautioning them on how they couch these monthly sentiment surveys. While the graph above indeed forms the letter ‘V’, to imply that, therefore, it suggests that by some miracle the economy is essentially back to where it was pre-COVID, is to sorely — albeit innocently — mislead the reader. You see, the surveys track sentiment on a month-over-month basis. Meaning, it’s a look at new orders, inventories, traffic, etc., relative to this time last month? In other words, how do they look relative to the worst conditions in a century? Imagine if we didn’t see a number above 50! I.e., imagine if things actually got worse after “reopening” the economy!
The 5-year/5-year Inflation Breakeven Rate:

This one, in a nutshell, measures the prospects for longer-term inflation. For the moment we’ll score this as a positive, as inflation rising amid what should otherwise be viewed as a resoundingly deflationary environment can be construed as a legitimate sign of recovery. The reason I say “for the moment we’ll score it as a positive” is because other data strongly suggest that we remain very deep in the woods, and, therefore, expectations of rising inflation is likely more about massive artificial pump priming (money printing and government spending/giving) and supply chain disruptions, as opposed to real, sustainable economic activity. Another way to make my point would be to substitute inflation with “cost of living” amid present conditions.
Baltic Dry Index:

BDI tracks the cost of shipping dry bulk materials across the world’s oceans. A rise in price could indicate a real pickup in global construction activity. However, we remain cognizant of the fact that it could also reflect present availability of ships (if limited [unmanned] due to lack of demand) and shipping routes.
I know, I seem to often have what amounts to a “yeah but” when I point to a positive. And I get that that can be frustrating for anyone who always looks on the bright side, searches for silver linings, etc. But, folks, clients, you don’t pay us to be optimists, nor of course to be pessimists, you pay us to do the work, dig deep, look where others may not be looking and manage your risk accordingly — while remaining objective and open-minded 100% of the time. Which, I assure you, you optimists out there 😎, is precisely what you’re getting.
“Looking where others may not be looking” means that we go way beyond the 51 inputs to our proprietary index as we constantly assess the global risk/reward setup.
In terms of macro conditions, I’ll leave you this week with a few supplementary points:

One-fifth of small companies are planning to dismiss workers or have already done so after using up their federal Paycheck Protection Program loans, and nearly half of firms said they will need additional aid over the next year, according to a National Federation of Independent Business survey.

Another poll led by Cornell University showed about one in four workers hired back thanks to PPP were told by their employer they may be fired again.

“Come October, if everything stays the same, there’s really no chance we’ll be able to operate,” said Morales, co-owner of Kachka, a Russian restaurant that’s won national recognition. The loan “is like a Band-Aid on top of a Band-Aid — it’s barely holding on. It’s going to fall right off in October.”

The funds allowed her to hire back most of the 48 people on staff and reopen with outdoor seating in a nearby parking lot. Once her $500,000 loan runs out, she’ll have to lay off as many as half of her current employees. The White House and lawmakers have so far been unable to agree on terms for a successor stimulus program that also includes supplemental benefits for the unemployed.

Small businesses with fewer than 500 workers employ about 58 million people, almost half the private workforce, ADP Research Institute data show. PPP at some point supported businesses representing most of them, according to the Small Business Administration, which runs the program.

Morales’s predicament is just one of several reasons why the July employment report on Friday, projected to show a 1.5 million gain in payrolls, could be followed by losses in coming months. Half of U.S. states have put reopening on hold, slowing foot traffic anew.

FYI the better than expected July jobs report came from a mid-month survey.

“Figures from Homebase, a scheduling tool used by about 100,000 businesses, show the share of people working at the end of July actually declined from the start of the month, the first time that’s happened since March.”

Banks, as they tend to during recessions, are tightening lending standards on personal debt issuance: 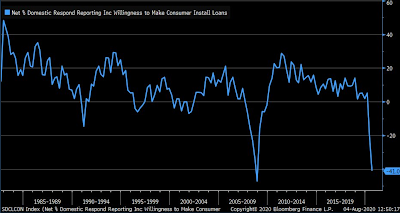 (Bloomberg) — “The earnings bar has been set so low, that more than 80% of the companies in the S&P 500 that have reported second-quarter results have beaten analysts’ profit estimates. That’s helping the index recoup losses due the outbreak of the coronavirus, but there’s a case to be made that not only are these earnings being overvalued, but that the growth reported before the pandemic hardly supported the S&P 500’s gains.

Actual earnings for the second quarter are down more than 10% from a year ago, continuing the first-quarter trajectory when they declined 7.6% YOY. On a 12-month trailing basis profits are off by more than 40%.

In the second quarter, more than 56% of the companies reported a decline in earnings and more than 65% posted a drop in sales. The shortfalls can be blamed on the coronavirus, but before the outbreak, earnings growth had already stalled. That’s one thing you can’t blame on Covid-19.”