Morning Note: The Only Certainty

Yesterday marked the third day in a row with a triple-digit move in the Dow. Of course the key distinction being that yesterday’s move was down, while Monday’s and Tuesday’s were up.


In Monday’s and Tuesday’s evening notes I reported that while the equity market, as reflected in the major averages, looked good price-wise, the daily internals weren’t anything to write home about.


Monday saw notably weak volume (22% below the 20-day average) with breadth that was, to say the least, uninspiring. Nearly half of all stocks traded on the three major averages actually declined on the day. Tuesday’s action, despite it’s nice rally among the averages, reflected virtually the same internals, although the Dow actually sported 16 decliners against 14 gainers despite rallying 131 points on the day.

Yesterday’s action, on the other hand — other than still below 20-day average volatility (5% below) — was void of any such ambiguity. The Dow closed down 710 points, with all 30 members finishing in the red. As for the S&P 500, 488 stocks (97%) closed lower, while for the Nasdaq it was 2,208 (85%) in the red. In terms of NYSE up/down volume, Monday and Tuesday reported close to 50/50; yesterday finished with literally 91% of the volume being in the down column.

So does yesterday’s classic bear market action suggest that the amazing rally off of the March 23rd low is finally over and done with, and off we go to test that scary March level — and to better reflect present fundamental reality?

Well, I honestly don’t know. In fact, I could argue that there’s still enough growling bears hiding in the bushes (well, actually, hiding in plain sight), for sure in the futures market, to keep us from concluding that sufficient euphoria has finally set in. Set in, that is, to that proverbial point from where there’s nowhere to go but down.

That last part said, when we’re talking investment advisers, I’m here to report that they’re indeed getting a bit too giddy for comfort. This week’s adviser bull/bear spread (bottom panel below) is just a hair below where it was when the market (top panel) rolled over ahead of the past two major selloffs: 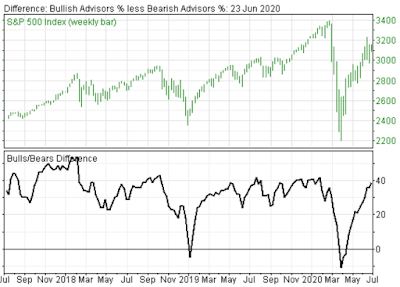 Here are this morning’s top 5 headlines on Bloomberg:

The Dow future contract is off 250 points as I type, the S&P’s is down .8% and the Nasdaq contract is only off a quarter-point. Small caps are getting slammed, down 1.3%.

Note that all equity futures are crazy jumpy this morning. They could easily be green by the open… wouldn’t bet on anything at this point…

Asian equity markets closed in the red last night, while 13 of the 19 European bourses we monitor are trading lower this morning.

Well, folks, uncertainty is about the only certainty in markets these days. Well, and volatility (both directions), of course…

Have a nice day!
Marty