We just scored our macro index for the week, and while the improvement in no way compares to what we witnessed with this morning’s jobs number, it was notable nonetheless: Improving 21.15 points to an overall score of -61.54, from last week’s all-time low of -82.69.

Now, while, again, a +21-point move is notable, prior to the present recession the lowest our index had printed (back tested) was -53 mid-way through the tech bubble debacle. Therefore, -61.54 is no reason to party. 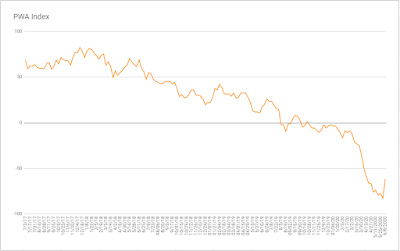 Here are the areas showing some improvement:


Personal Income (direct government payments explains this one).   click each insert below to enlarge…
Red (-1) to green (+1):

Non-Farm Payrolls (see this morning’s comments). This graph (which you’ll see elsewhere) needs explaining: Note in the graph the 20 million+ jobs lost in April, and the 2.5 million gained in May. The unsuspecting eye might see this as suggesting that all of the previous jobs lost were regained, plus an additional 2.5 mill. When in reality we’re simply looking at net results for the reference month. So, you guessed it, we recovered a mere fraction of the jobs we’ve lost. Literally tens of millions of Americans remain out of work. Also, per the BLS, the 13% unemployment number (like nothing we’ve seen in the modern era) reflects data-collection issues that have been troubling the agency throughout the crisis (meaning all of the horrific numbers we’ve seen thus far have under-reported reality). Some temporarily jobless workers were characterized as employed in May; had they been counted correctly, the department said, the unemployment rate would have topped 16 percent!
Red to green:

So how do we square continued readings worse on net than anything modern history’s delivered to now with a stock market that’s nearly back to pre-recession levels? Is it truly discounting what will be the shortest recession on record, or is there something else (Fed-printing, politician-pumping, retail investor euphoria, maybe) going on?


Well, of course time will tell, but as counter-intuitive as the current rally — which amounts to a 43% surge off of the March low — is, there are indeed a few bear market precedents to consider:


The initial bear market rally of history’s only recession worse than the present peaked at +46% before careening down to the tune of -83%. That was 1929.


The next epoch rally occurred in 1932, with the S&P surging 111% before rolling over -41%. Then, in 1933, the index booked a 121% gain before turning back and bottoming 34% below the peak (those amounted to slightly higher lows, but they were harrowing nonetheless).


1938 saw a 62% bear market rally that ultimately succumbed to a decline that didn’t bottom until it wiped out 46% of market value (a notably lower low).


While the tech bubble and the real estate bubble bear markets of the 21st Century didn’t see quite the rally we’re currently experiencing, I imagine those 19%, 20%, and 21% surges during the tech bear market, and the 11%, 12% and 24% comebacks of the 2007/2008 experience — all of which succumbed to devastatingly lower lows — had too many unfortunate folks thinking the worst was over.

While, again, time will tell how this ultimately plays out, present conditions, fundamentals, and not to mention history has us continuing to play it a bit defensively right here.


Have a great weekend!
Marty


P.s. Any questions or comments I receive via email will be met with a slightly delayed reply. I’ll be deep in the woods, literally. My plan is to make it out long before the economy does. 😎