Well, the bad news is our macro index just posted its 35th consecutive week below zero. Plus, its net score remains lower than any logged during the past two recessions (back-tested). The good news is this week’s score marks the third consecutive weekly improvement. 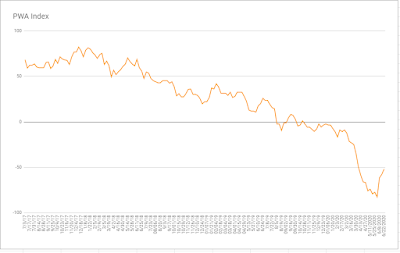 While, given the base we’re working out of, it’s hard to imagine anything but improvement across the areas we study, and, indeed, nearly all of our data show at least some incremental improvement, a couple of key data points continue their descent.

Note how accurate an economic indicator the Chemical Activity Index has been historically.


I took the following from the teaser to a recent interview with International EChem Chairman Paul Hodges. Note the sentence I bolded, and note my intro paragraph above (our index has been in the red for 35 weeks [i.e., beginning months before the pandemic hit]):

“The global chemical industry is the third largest sector in the world behind agriculture and energy, and its outputs find their way into everything we consume. Paul Hodges, chairman of the pH Report, analyzes the chemical industry to give a unique perspective on the global economy to investors and corporations. In this timely discussion, he uses this lens to analyze the industrial fallout from COVID-19. Hodges argues that the chemical industry has been signaling a global growth downturn for years and that COVID-19 has only accelerated this trend as well as other trends like de-globalization.”

My point being that we were warning of heightened recession risk back to late last summer when we, therefore, began hedging client portfolios (and, yes, per the graph, the Chem Activity Index began looking toppy — as did our index — back in early ’18). Our chief concern being the potential depth of the next downturn given what we viewed as an enormous debt bubble just looking for an excuse to pop.


Speaking of that debt bubble, this next chart is troubling (to say the very least!): 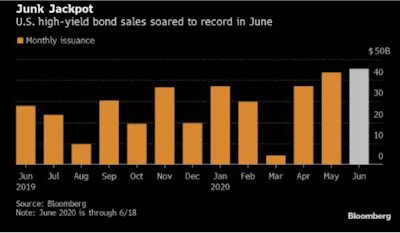 “This chart would have been unlikely if not unthinkable just a few months ago. How could issuance of junk bonds set a record in an economy with rapidly-rising defaults? The answer is of course the Fed and how its HY asset-purchase program encourages excessive risk taking.”


Lastly, while we absolutely respect the data, at all times — scores notwithstanding — we have to exercise objective, critical, thinking; putting everything in its proper context.


With regard to improvement in, in particular, some consumer-related data, we must remain cognizant of the fact that millions of folks are receiving temporary increases to their unemployment benefits, and billions of dollars of business loans become forgivable if employers remain fully staffed, but only temporarily.


Of course the operative words in the previous paragraph are “temporary” and “temporarily”.


I recall the Obama Administration’s “Cash for Clunkers” program during the last recession. I was an intense critic back in the day, as it took a whole lot less than rocket science to know that auto sales after experiencing an unavoidable surge due to the program would come crashing back to Earth upon its expiration.


Note the yellow rectangle that encompasses the 2009 program start to finish:

I referenced the program a couple of times in my 2013 book Leaving Liberty?. Here’s an excerpt where I include a quote from economist Don Boudreaux that I believe speaks to what we’re presently experiencing. I.e., the powers-that-be are literally trying to fix a debt problem (the bleeding) with increased debt transfusions:

The Keynesian-minded supporters of QE 1, 2, 3, infinity, and fiscal stimulus (be it payroll tax holidays, cash for clunkers, homebuyers tax credits, unemployment insurance extensions, etc.) would have us believe that the economy struggles because the stimulus programs were insufficient. They would have us believe that we need to step up the volume— and right away. And if we don’t, and we double-dip back into recession, insufficient intervention will be the cause.

Like I said in “A Thousand Miles per Gallon,” we’re at the mercy of a few very bright, academically gifted appointees who’ve proven to be most adept at test-taking and, alas, mess-making.