As I express/explain our relatively bearish thesis during client review meetings I’ve been making reference to the coming wave of bankruptcies and the simple, apparently unbeknownst to many market participants, fact that the Fed cannot print sustainable corporate cash flow — nor jobs for that matter.

It seems to come as a surprise to clients when I suggest that, in fact, it’s already begun. I often get a “really, other than X, Y and Z (companies in the headlines), who?” response (*see list below).

Well, for starters, not only is it underway, the present wave of bankruptcies — as early in recession as we are — is already on the verge of setting records. 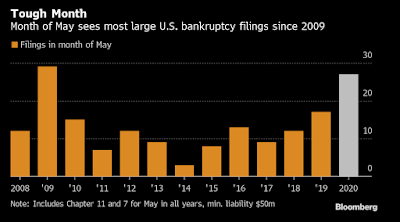 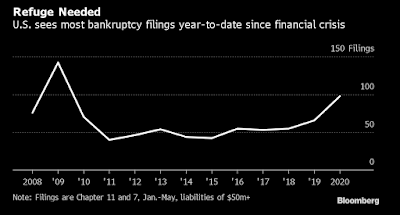 Seems crazy, given how busy credit markets are these days. I.e., Investment grade corps have literally issued a trillion dollars of fresh new debt so far this year. Again, crazy! And, yes, bubbly! In a really bad/risky way — in my humble view…

Like I keep sayin, stocks are utterly unhinged from present economic reality, which means — on behalf of you clients — we’re going to continue to play it cautiously (hedged) for the time being.

As for today’s action, stocks pretty much closed where they opened; nicely higher. However, as is often the case on the up-days of late, on below-average volume, although today saw notably better breadth than yesterday. Only two of our core positions closed lower on the session; gold and ag commodities. As I signaled this morning, we added ever so slightly to our position in materials company stocks (up 2.1% today), as — while, again, we remain guarded right here — infrastructure as part of a future stimulus program implies a relative edge in the space…

Whiting Petroleum filed on April 1, though it said it would continue to operate its business. Shares of the publicly-traded shale driller dipped below $1 in March after trading at more than $150 in 2015.