This morning I offered up a quick commentary on what I was seeing in today’s trading action. That distortion between headline index numbers and the underlying action, while a little less skewed to the bearish case, pretty much lasted till the close.


Here’s today’s volume chart (only the utilities sector was able to conjure up above average vol [+2.6%]): 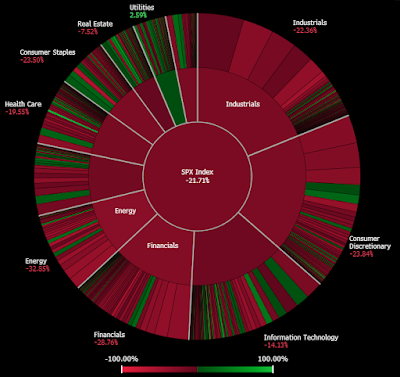 As for credit markets, well, take the color below for what it suggests; credit market (there are a couple of currency-related data points in the mix below as well) participants are not the least bit optimistic on the underlying macro setup:  click to enlarge… 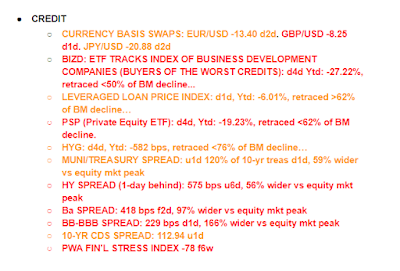 Economist John Hussman does exceptionally good work on market setups. His latest essay so comports with our base case — even our current positioning (last paragraph) — that its excerpts below should sound very familiar to clients and regular readers:   emphasis mine…

“Severe economic recessions often feature what might be called an “incubation phase,” where an exuberant rebound from initial stock market losses becomes detached from the quiet underlying deterioration of economic fundamentals and corporate balance sheets. From the post-crash low of November 13, 1929, the Dow Jones Industrial Average enjoyed a 48% rebound, peaking on April 17, 1930, followed by an 86% collapse by July 8, 1932 (an overall loss of 89% from the September 3, 1929 bull market peak).”

“…Wall Street was shocked and exuberant that reported employment bounced back by 2.5 million, evidently not giving a moment’s thought of what has financed this rebound, nor the fact that this support is impermanent. What we are observing is not “recovery,” it’s the impact of a government program that is paying the salaries of employees that are kept on payroll, whether they are actually working or not.”

“In the face of a breathtaking disconnect between Main Street and Wall Street, largely based on overconfidence in free money, my sense is that there remains a crisis ahead that will emerge “gradually and then suddenly.” It is important to allow for that possibility, but nothing in our investment discipline relies on that outcome. It is enough to simply align our investment stance with prevailing, observable conditions – primarily valuations and market internals – and to shift our outlook as the evidence shifts.”

We’ll leave it there for tonight…