The world of asset prices is mostly making sense this morning.

Asian equities, Hong Kong big time, got hammered overnight. Re: Hong Kong; China is abandoning all pretense by introducing legislation that would do a real number on HK’s autonomy — right, frankly, in the US’s face.


European stocks are falling this morning as well. Oil’s down 5%, Copper’s down 2%, gold and silver are up .78% and 1.8% respectively. Ag commodities mostly down. Bonds are up (yields down).

So, again, that all makes sense, in that it reflects a straining global economy.

I know, but what about US stocks? Well, they were down a bunch in futures overnight, then, as mysteriously happens often enough to call it “mysterious”, right around 3:30am (6:30am East Coast), futures staged an impressive rally, but not quite enough to get them into the green. As I type the Dow’s off 124 points, the S&P 500 is down .3% and the Nasdaq is off a mere .1%… Hence my “mostly” in the opening sentence.

With Washington and Beijing at each others throats in a manner that would’ve utterly tanked the market anytime during 2018 and 2019, with the present state of the global economy, and with everything else not pretty that we’ve been featuring herein, US stocks hardly budging (relative to Asia) this morning and holding at levels (while still markedly lower than the peak) not remotely reflecting fundamental reality doesn’t make much sense, right?

Well, when I put it that way, no. But when I explore (and recall) past bear markets, yes, it absolutely makes sense. This is how bear markets have played out — early-stage — historically. Which means U.S. stocks will likely (historically-speaking) jibe with economic reality before it’s all said and done…


Regarding that “mysterious” early morning phenomenon, take a look at my 5-minute S&P 500 futures chart for this week. Check out the green rectangle that captures that 3am to 5am time slot: 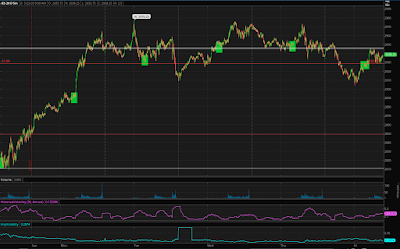 Some believe it’s the infamous “Plunge Protection Team” (covert government operatives) stepping in with serious $ to boost stock prices. Personally, I dunno, were it true you’d think they wouldn’t be so dang timely. Could be others trying to game the notion: I.e., believing they’re front-running the PPT, while themselves perpetuating the myth. Although, in either event, smart money would be all over that one; feeding the PPT and/or the gamers the shares they’d been looking to short…