“This market makes no sense” is the present mantra among many macro analysts/investors/traders, and even among individual investors who’ve been around the block a time or two.

Well, it does “make sense” actually. The question is, do the factors that make it make sense make it something the thoughtful investor would want to all-out chase?


So what makes it make sense?


1. The vast majority of history’s huge one-day rallies have occurred during bear markets. So, frankly, this is normal.


2. As I’ve been reporting week after week, futures traders simply will not relent in their quest to capitalize on what they believe will be the inevitable plunge in stocks once the “hope phase” has run its course. But then, when the market rallies on breaking news, they’re forced to break out of those shorts (as their P&L’s break lower) and buy back those borrowed shares in no less than panicky fashion. Adding serious upside oomph to the stocks/indexes they’d shorted.


Per Friday’s “commitment of traders” update, S&P 500 Index futures traders who were “forced” to cover recently have circled right back around and reestablished their shorts, and/or some new bears have entered their camp:

And, lo and behold, now the traders who dabble in Nasdaq Index futures have turned net bearish as well (first time in over a year):

What do these folks know that the crowd doesn’t? Or vice versa?

I guess he’s tracking the same stuff we are.


So what else makes it make sense? Well, that one’s a no-brainer. I mean, for the past decade-plus it made perfect sense to buy every dip and to load up the truck when the Fed’s printing money. And, you know, I wholeheartedly agree when general conditions say odds favor economic expansion and positive year-over-year corporate earnings growth. However……..


Here’s the view via our PWA Macro Index: 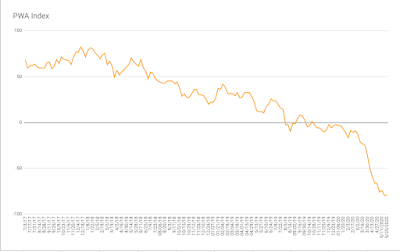 And here’s from Saturday’s macro update (yep, on those “attendant bounces”).

“Now, for sure, by and large much of the data will begin improving notably over the coming weeks. And, for sure, there’ll be plenty of hype to go with it. And I suspect, given the nature of recent trading, we’ll see attendant bounces in the stock market.

The question thoughtful investors will be asking themselves is not so much to what extent are we (via the data) bouncing off of previously unheard of lows, but what are the prospects for recapturing the pre-crisis trajectory anytime soon? — being that stocks are pretty much priced as if the economy’s already there. That’s what we’ll be addressing and managing portfolios around in the coming weeks/months.”

Back to my opening question: …do the factors that make it make sense make it something the thoughtful investor would want to all-out chase?


On another note, I read the Fed’s latest “Financial Stability Report” over the weekend. There’s a lot there that would have any thoughtful investor looking beyond the present FOMO (fear of missing out) mood and, to put it mildly, giving pause. I’ll circle back soon with more on that one…


Have a great day!
Marty