J.Crew and Golds Gym filed for bankruptcy protection today. The likes of Sears, Neiman Marcus and JC Penney are likely next on the retail chopping block. These, as you might imagine, would be on virtually any analyst’s list of obvious recession casualties, regardless of the cause. But of course COVID-19 is anything but your run-of-the-mill “cause”.

“With all this fiscal and monetary stimulus in place, there has been a collective sigh of relief. For a while, it had even seemed like markets thought the worst was over. But reality is hitting now – the third phase of recession. As I framed in mid-April, there are three phases. In phase one, you have the initial downdraft and potential liquidation of hedge as well as Ponzi investors.

The government response ushers in a stabilization and hope that the worst is over. That’s phase two, the hope stage of recession. But, that’s always followed by the ‘discover’ or ‘real economy’ phase, what my colleague Raoul Pal calls the ‘insolvency phase’. It’s where illiquidity and insolvency diverge. And the truly insolvent are found out. And that’s when we get to see how bad the damage is.

We’re there now. The insolvency phase is beginning and markets are reacting negatively already. If you didn’t adjust your investment portfolio to mitigate downside risk already, now is the time to do so because I believe we will be re-testing the lows.”

This morning’s initial dip in equities got bought, particularly when it comes to the Nasdaq, at least that’s how it appears on the charts. However, upon deeper inspection, which we do at the end of each day, today’s rally looks very much like so many, if not the majority, of the up-days we’ve seen since the current rally began mid-March. I.e., uninspiring… 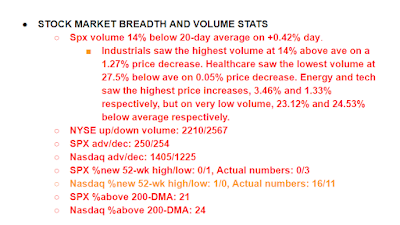 In a nutshell, overall volume was notably below-average on an up-day (that suggests lack of conviction on the part of the bulls). Worse yet, the industry with the highest daily volume (industrials) was actually down 1.27% — that suggests strong conviction on the part of the bears, although, frankly, the fact that airlines were only down 5% amid Warren Buffet’s complete abandonment, not to mention present economic reality, suggests that FOMO (fear of missing out) remains alive and well. Also uninspiring was the fact that the two sectors with the strongest rallies (energy and tech) saw extremely weak volume (i.e., no conviction).


The volume for shares trading lower was actually greater than that of rising shares on the New York Stock Exchange. The S&P 500 had slightly more members trading lower in price vs higher, while rising shares on the Nasdaq only slightly outnumbered declining shares, and so one. If I had skipped the price action and went straight to the internals, I might’ve guessed today was a down day.

As for our daily walk through credit markets, I’ll just offer up the color (speaks for itself, and reflects the insolvency risk I mentioned in the intro):   click to enlarge… 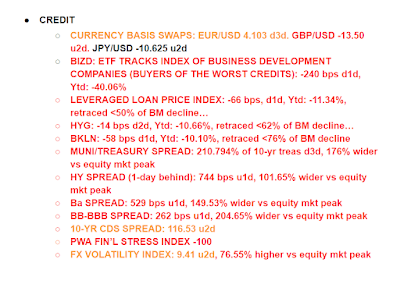 As for today’s data releases, well, unfortunately. I won’t be closing on a positive note this evening:   click to enlarge…