US stocks staged an impressive rally today off of what was a notably lower start. From what I gathered from the internals and the leadership, short-covering legitimately deserves the credit. But what inspired the initial pop that had the shorts rushing for cover? Looks entirely technical.

The S&P 500 failed once again — last Friday and again this Monday — to pierce the all-important 61.8% retracement level, then in just two days it pounded its way back down to the 50% line; which was an area that was virtually bound to offer some relief. The bounce clearly spooked the shorts into action: 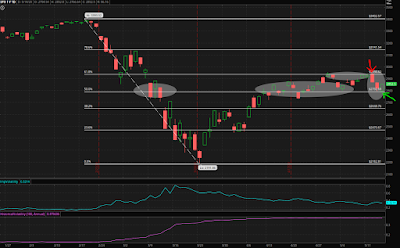 Coincidentally, I touched on this likelihood this morning while stocks were still in the red:

“Stocks are attempting a threepeat daily selloff, although they’re coming off the lows a bit as I type. Make no mistake, even if we are now embarking on the next leg lower, along the way the market will be met with some aggressive buying, and, therefore, impressive intraday (and all-day/week/month/months) rallies as (along with occasional spike on the market-pumping headline) technically-inclined bullish traders rush in to battle the bears at previously-established support/resistance lines. Those market “internal” statistics I often reference give us a sense as to which side has the most conviction.”

Speaking of those “internal statistics”, today’s were sloppy. Although, at first blush you’d think, at least in terms of volume, that the day’s action was bullish; with total S&P 500 volume 11% above the 20-day average on a nice 1.15% up day. Problem is, the volume peaked at 8:30am pt when the index was significantly in the red. From there the market staged a rally that — save for one brief dip — carried through to the end of the session, but on volume that trended lower throughout. Moreover, while the NYSE up/down volume (3805/1866) was decent, as was the S&P 500 advance/decline line (386/117), the Nasdaq actually saw fewer advancers than decliners on an up day (1260/1360) and the number of stocks hitting 52-week highs vs 52-week lows was the opposite of bullish: Within the S&P 500 4 hit new one-year highs while 16 hit new lows; for the Nasdaq the new highs totaled 20, while new lows totaled 108.

As for economic data, all you need to know is that 2.9 million Americans filed new unemployment claims last week. Added up we’re now looking at roughly 25% of the American workforce being currently unemployed. The notion that stocks at present levels accurately reflect such a statistic is — to put it mildly — at odds with market history and fundamental commonsense.

Thanks for reading,
Marty